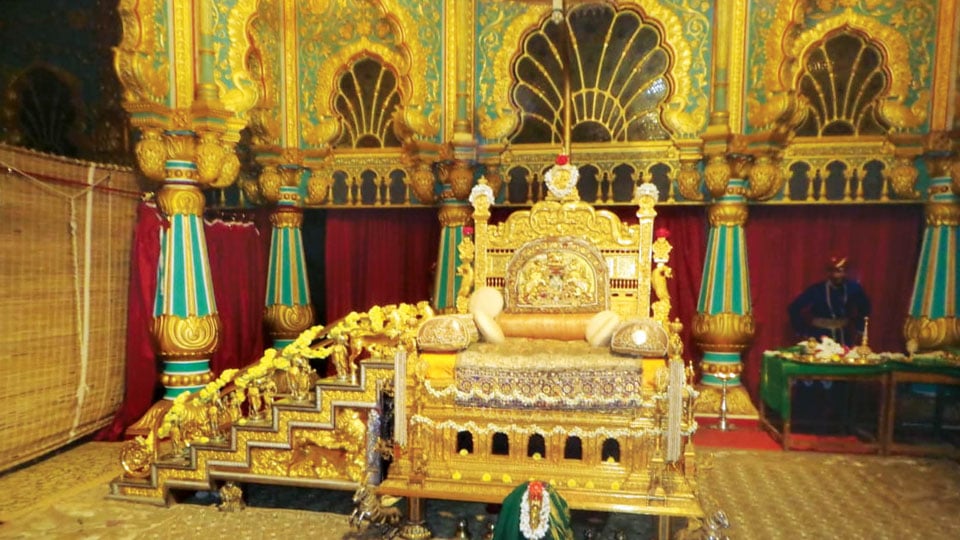 Mysore/Mysuru: The gem-studded Golden Throne has been put on public display inside the Mysore Palace for tourists since Monday and Rs. 50 per head is fixed to have a glimpse of it.

Now tourists have an opportunity to see the beauty of the majestic Golden Throne during Palace timings from 9.30 am to 5.30 pm. Hitherto, the Throne, after being assembled, was covered with curtains and barricaded to prevent people from going near it.

According to T.S. Subramanya, Deputy Director, Mysore  Palace Board, the Throne is on display after it was assembled last week and kept ready for the Private Durbar (Khaas Durbar) by the Mysore Royal family during Navarathri Festival which begins from Oct. 17. This Throne is added to the list of rare artefacts on display inside the Palace premises.

While entry fee into the main Palace is Rs. 70 per head for adults and Rs.35 for children, interested tourists have to pay an additional Rs. 50 per person (same for adults and children) to have a glimpse of the Royal Throne. A person stands guard at the spot that leads to the Hall where the Golden Throne is kept under tight security. He enquires the tourists in Kannada, English or Hindi about their interest to see the Throne by paying an additional Rs. 50 per head. Those interested are tied a yellow colour band around their wrist and removed once they enter the high-security zone where the Throne is kept for viewing.

READ ALSO  New entry gates to Palace to be operational from Aug. 17

The staff deployed near the Throne do not allow any visitor to capture the Golden Throne in their mobile or still camera. The tourists are not allowed to take out the mobile phones from their pockets. Besides, six armed guards are posted on all sides of the Throne as safety measure. They are keeping strict vigil on tourists, especially in the Hall where the Throne is displayed.

Subramanya further said once Dasara begins on Oct. 17, the Throne will be ascended by scion of Mysore Royal family Yaduveer Krishnadatta Chamaraja Wadiyar to hold Khaas Durbar (Private Durbar) on all days of Navarathri.  After Dasara, the Throne will be dismantled and kept in the strong room.