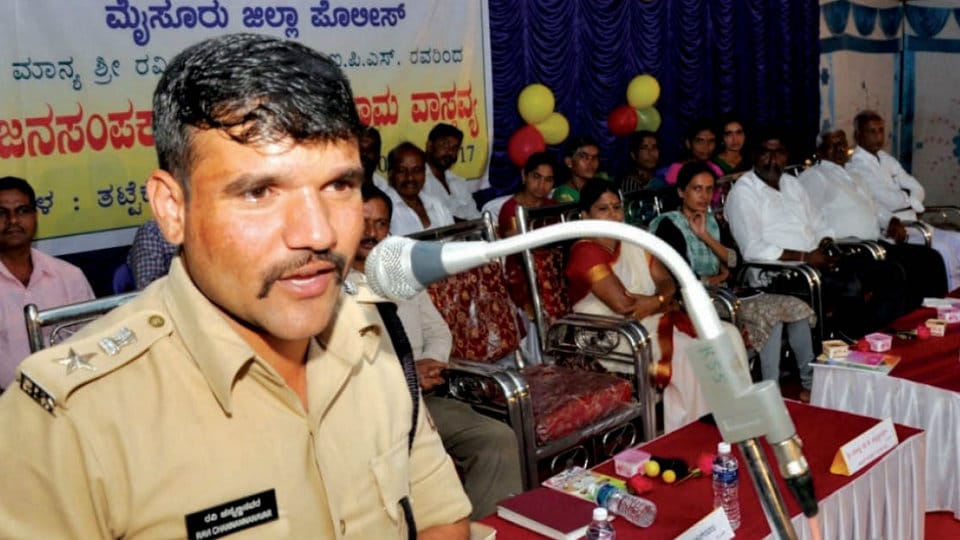 Hunsur: Pointing out that Grama Vastavya is aimed at creating awareness amongst the public on the functioning of the Police Department, SP Ravi D. Channannavar said that the Police Department will make all efforts for addressing the problems of the people by referring complaints/grievances to the concerned departments.

Speaking at the ‘Janasamparka’ programme organised as part of Grama Vastavya at Tattekere in the taluk recently, the SP said the initiative will go a long way in making the people realise the importance of adhering to Law.

Expressing concern over the increasing number of causalities in road mishaps, the SP said that 400 people are losing their lives every year in the district due to road accidents. Explaining the reasons for accidental deaths he said that the motorists should understand the importance of following traffic rules and regulations and wearing helmets.

The SP further said that the minimum educational qualification for obtaining driving license is a pass in eighth standard and added that the Police Department would organised free classes for the needy to enable them get the driving license.

Continuing, the SP said that people should come forward for utilising the Chief Minister’s ‘Harish Scheme’ to get immediate treatment expenses in case of injuries caused by road mishaps.

SI Puttaswamy in his introductory address, said that as per the direction of SP, public contact programme was held at 167 villages in the taluk. Meritorious students were felicitated with ‘Pratibha Puraskar’ on the occasion.