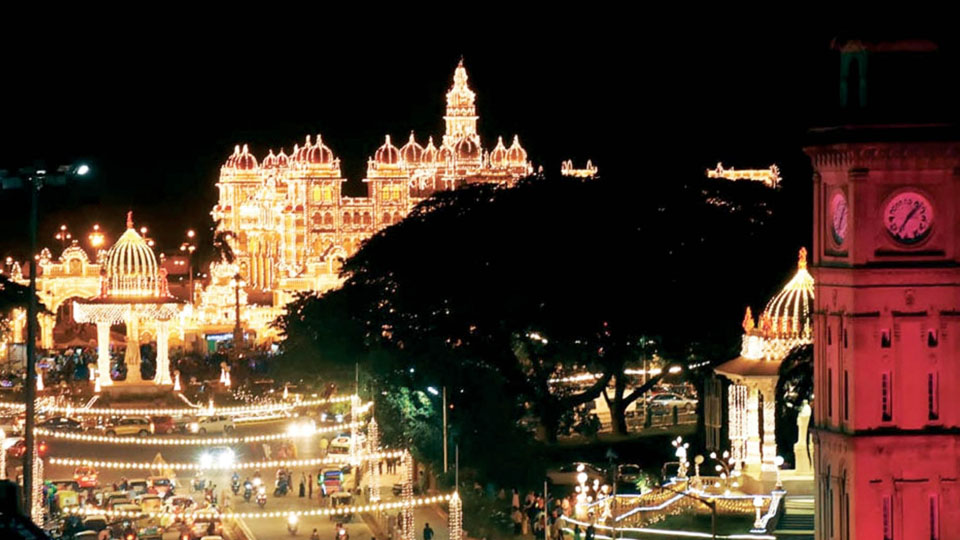 Mysore/Mysuru: Get set for a grand Dasara 2022 illumination where brightly lit main thoroughfares of the Central Business District — that form the core heritage zone, commercial hubs, important roads,  circles and junctions — and a 110-km radius of major streets of Mysuru will behold tourists.

The Chamundeshwari Electricity Supply Corporation (CESC) is set to spend more than Rs. 5 crore on the illumination as the Government has already announced that it will be a grand Dasara after two years of subdued celebrations.

Last year, CESC illuminated 100 kilometres of the Mysuru radius and this year, it is adding 10 more kilometres. The illumination had brought tourists from far and wide and this one move had spurred tourist arrivals and the hospitality industry too saw a big boost in occupancy rates.

“This year, we are planning a mega illumination task and over  Rs. 5 crore has been set aside. We have got a green signal from the State Government that it will be a full-fledged and grand Dasara. So we are gearing up,” CESC General Manager (Purchase) K.M. Munigopalaraju told Star of Mysore this morning.

The focus of this year’s illumination will be late Kannada actor Power Star Dr. Puneeth Rajkumar and his cut-outs and action poses will be an integral part. “This Dasara the illumination task will be on the lines of Durga Puja in Kolkata and will also follow the pattern that was practised during the time of              Maharajas,” he noted.

“So far, CESC has earned appreciation from the public, hoteliers and tourism stakeholders and tourists per se for illuminating Mysuru for the last five to six years. We are targeting to spend at least 10,000 to 12,000 units of electricity per day,” he added.