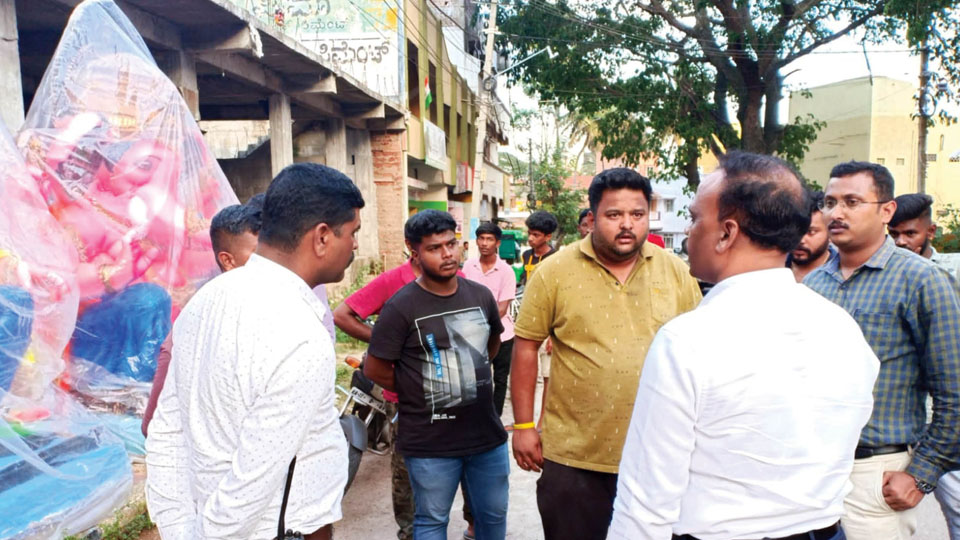 Mysore/Mysuru: The Mysuru City Corporation (MCC) wants Ganesha idol-makers to refrain from making Plaster of Paris (PoP) idols for the festival and has tightened its noose on the use of PoP.

But artisans continue to make big Ganesha idols using PoP and chemical colours unmindful of the serious pollution threat posed by them to the environment and water bodies. As complaints were received by the MCC regarding the flooding of PoP idols all over the city, teams have been formed to raid and seize such idols.

Gowri and Ganesha festivals will be celebrated on Aug. 30 and Aug. 31.

MCC Health Officer Dr. D.G. Nagaraj told Star of Mysore this morning that the MCC has been spreading awareness of the ill- effects of PoP idols but still, such idols are being marketed. “This time we are raiding such places and seizing PoP idols. Our teams have found that while there are many clay idol-makers who have rejected PoP, there are also many makers who still depend on PoP for larger idols,” he said.

PoP idols are more attractive than clay idols, so they command a high price. Most festival organising committees still prefer PoP idols for installation in pandals to attract devotees. The large-scale immersion of PoP idols is polluting the river water, besides posing a grave threat to fish and other species, Dr. Nagaraj said.

Many idols that were unsold in 2020 and 2021 due to COVID are being kept on display now. “People are making PoP idols if there is an order for idols that are more than 10 to 15 feet. Yesterday, we visited places including V.V. Mohalla, Hebbal, Vontikoppal and surrounding areas from where we have got complaints,” he said.

The ban on PoP to make idols has been in place since 2017 when the Karnataka High Court upheld a notice issued by the Karnataka State Pollution Control Board (KSPCB). Along with Dr. Nagaraj, Senior Environment Officer of KSPCB Ramesh too conducted checks and seized many PoP idols.

“We are increasing our vigil as we are approaching the festival date. If we spot repeat offenders, we will impose heavy fines and file a case against the makers. We have told all the zonal health officers and environmental officers to conduct surprise checks frequently at places where Ganesha idols are made to ensure that PoP idols are not made,” he added.