Home » News » Pourakarmikas to get free breakfast from next week 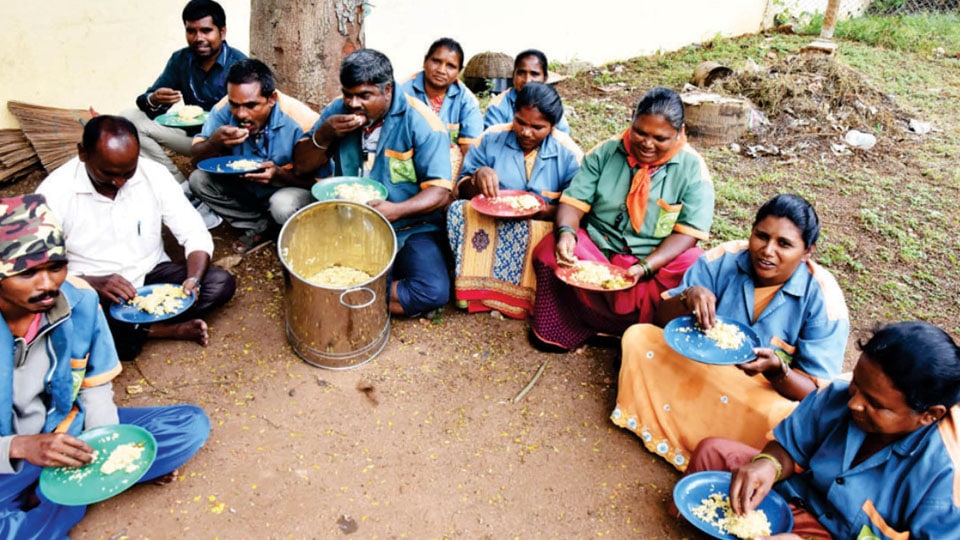 Pourakarmikas to get free breakfast from next week

Mysore/Mysuru: The free breakfast scheme for Pourakarmikas of Mysuru City Corporation (MCC) will be reintroduced from next week. First introduced in 2017, the ambitious project has seen many cancellations, complaints of quality and also taste in the past. It remains to be seen how the MCC will implement the project this time without any issues.

The decision to reintroduce the breakfast was taken at a meeting held at the Old Council Hall of the MCC that was chaired by Karnataka State Safai Karmachari Commission Chairman M. Shivanna where Mayor Sunanda Palanetra, MCC Commissioner G. Lakshmikantha Reddy, leaders of permanent and contractual Pourakarmika Unions took stock of the welfare of sanitation workers.

The Union leaders placed a demand of breakfast allowance of Rs. 600 per month where Shivanna noted that many Corporations across the State give healthy breakfast to Pourakarmikas and in fact, the Bhadravathi Corporation gives them special food including biriyani. “Why can’t the MCC follow the system,” he questioned.

Pourakarmikas do not find time to prepare breakfast as they start from home at 5 or 6 am and invariably they stand in front of hotels and wait for their food. This would embarrass them and most of the time, Pourakarmikas stay hungry. Also, during many health camps, it was found that most of them skip breakfast and this was one of the reasons for their health being affected.

Responding to Shivanna, Lakshmikantha Reddy said that the breakfast scheme was cancelled as there were issues of quality and many Pourakarmikas had fallen ill after consuming the food supplied by one particular contractor.  Also, only ‘rice bath’ was served every day in violation of the conditions stipulated by the MCC that variety and quality should be maintained. As the conditions were violated, the MCC was forced to cancel the contract.

Shivanna advised the MCC not to hand over the scheme to inexperienced people as it might lead to food poisoning and other issues. The Commissioner told the Safai Karmachari Commission Chairman that Rs. 20 has been fixed as per day breakfast charge per person and from next week, the scheme will be implemented.

The meeting also discussed the issues in direct transfer of salaries to the accounts of Pourakarmikas where the Commissioner replied that only 46 of them had submitted their bank and other verification documents while 59 of them did not furnish any documents and as such the direct salary transfer cannot be implemented.

MCC Health Officer Dr. D.G. Nagaraj stated that rest houses will be constructed at all the 65 Wards so that Pourakarmikas can take rest after a day’s hard work. These rest houses are necessary for them to change clothes and also unwind from the work pressure, he said. It was suggested that instead of constructing such rest houses at all the 65 Wards in one go, the MCC must first construct them in 35 Wards and later venture into other wards.

The Union leaders Mara and C.R. Rachaiah called upon the MCC to fully utilise the 24.10 percent money that has been reserved for Pourakarmika welfare by initiating several schemes including providing compensation of Rs. 10 lakh to the Pourakarmikas who lose lives while performing their duties.