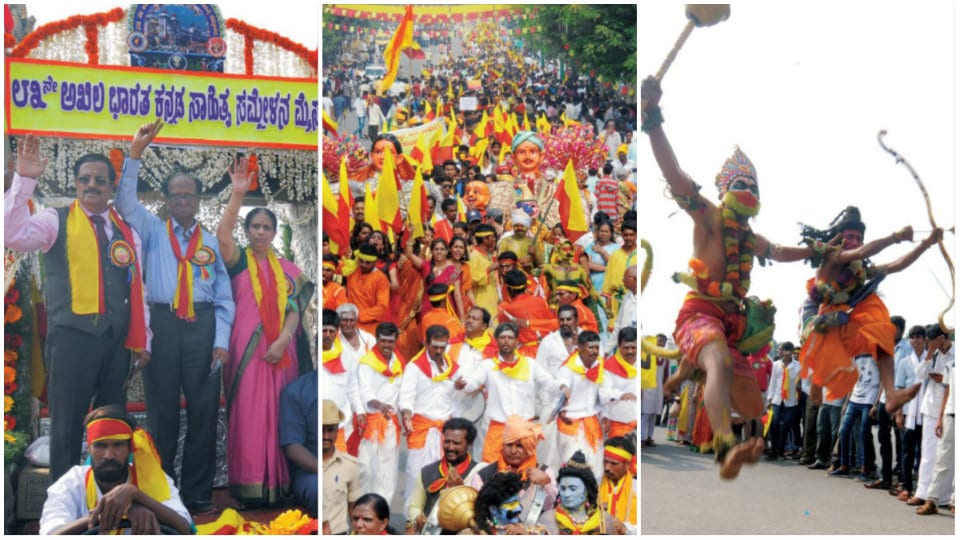 Mysuru: Red and yellow colours of Kannada Flag dominated the city as the three-day 83rd Akhila Bharata Kannada Sahitya Sammelana began this morning with a massive procession with over 22,000 people including 9,000 schoolchildren and 2,000 women participating.

A carnival atmosphere, resembling Dasara festival, prevailed all through the procession route.

The procession ended  at Maharaja’s College Grounds, the main venue of the event.

As part of the festival, the Mysore Palace will be illuminated for three days from 7 pm to 8 pm.

The Sammelana is being held in Mysuru after a gap of 27 years. 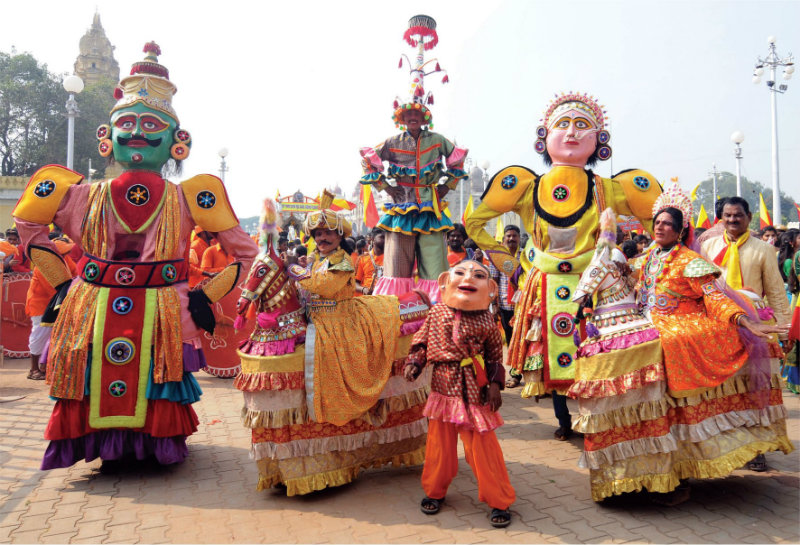 So much was the crowd, tableaux and cultural troupes that it took almost one-hour-15 minutes for the procession’s tail-end to leave the temple premises. The last decorated structure to leave the venue was the silver chariot that was designed in ‘Ashwamedha’ style with figurines of horses and swans on either sides. Sammelana President Champa, his wife Neela and Manu Baligar were carried in the chariot, accompanied by the famed Police Band.

While the girls participating in the procession wore bright-coloured sarees and traditional dresses like Ghagra-Choli, boys were dressed in the traditional dhoti and shalya. Some of them were wearing Nehru Jacket that was popularised by Prime Minister Narendra Modi and all the procession participants held Kannada Flags – big and small – inviting the shopkeepers and visitors to the Sammelana.

There were more than 15 tableaux and they had various images publicising Male Mahadeshwara Temple, Basavanna, Siddappaji, Nalwadi Krishnaraja Wadiyar and other leaders who have made a difference to Karnataka culture and society.

There was an exclusive tableau that carried an orchestra team that continuously sang Kannada folk and film songs from the start till the end of procession. 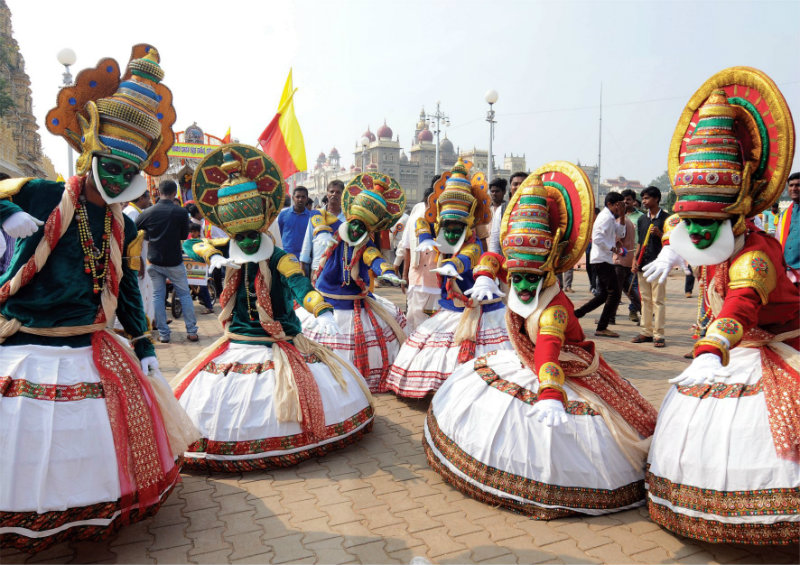 Earlier in the day, at the Rashtrakavi Kuvempu Stage that was set up inside the Rajarshi Nalwadi Krishnaraja Mahamantapa at Maharaja’s College Grounds, National Flag, Kannada Sahitya Parishat Flag and Kannada Flag (Naada Dhwaja) were hoisted, signalling the beginning of the mega event. 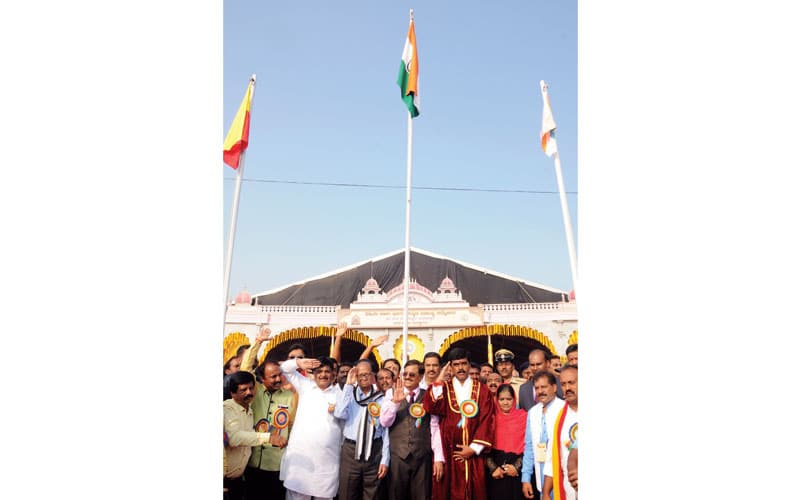 While the National Flag was hoisted by Minister Dr. H.C. Mahadevappa, Parishat Flag was hoisted by Manu Baligar and the Kannada Flag by Dr. Y.D. Rajanna in the presence of Champa and Deputy Commissioner D. Randeep. National Anthem and Kannada Anthem (Nadageethe) were played along with Police band.

Kannada pride was in ample evidence, as the language’s different dialects reverberated, sounding like music to the ears at the Maharaja’s College Grounds.

City’s own Ramesh Shetty, who is working in BEML,  has applied leave for two days to participate in the Sammelana.

A Kannada enthusiast, his two-wheeler sported not only the State flag with pride but also had places of tourist interest displayed. He said that he had been attending the Sammelanas regularly and promoting the cause of Kannada.

This is the city ruled by the Wadiyars and one of the kings who endeared himself to the people of the State is Jayachamaraja Wadiyar. An ardent fan of J.C. Wadiyar, Na. AA. Dada Pir, who is an employee of HAL, Bengaluru, is moving around wearing the royal dress of the king with the famous Mysuru peta. Speaking to Star of Mysore, he said, “Jayachamaraja Wadiyar donated 1200 acres of land to set up HAL factory. As a result nearly 36,000 families have made their lives. To show my gratitude to the rulers I always wear this dress and attend the Sammelanas and Rajyotsava celebrations.”

The delegates from Mysuru, Mandya and Tumakuru districts were a dismayed lot this morning. Many of them had arrived early in the morning hoping to register and collect their kit bags and food coupons. However, they were disappointed to see the counters closed, while the counters of other districts were functioning. Even at 10 am, these counters were not open, whereas they were to be kept open from 8.30 am itself. There was heated discussion at the Tumakuru counter between the Police and the delegates. Finally they were pacified when the volunteers in-charge of this counter came at 9.30 and opened it.

People were making a beeline to the food court in the morning to savour the breakfast of sweet and kara pongal, bonda and tea or coffee.

There is one stall that is attracting the attention of all Kannada lovers and the reason is a foreigner who speaks fluent Kannada, is selling Kannada books written by him and offering discounts.

Henrik Hardeman, who loves Mysuru and made it his home, has set up a book stall at the Sammelana venue. Hardeman hails from Denmark and Dutch is his mother tongue. The three books he has written includes — Namoone costing Rs.15, Sarala Sudoko 1 and 2 costing Rs.30 each. However, if people buy Sudoko 1 and 2 it will be given at a discounted price of Rs.50, while three copies of Namoone is being sold at Rs.40.