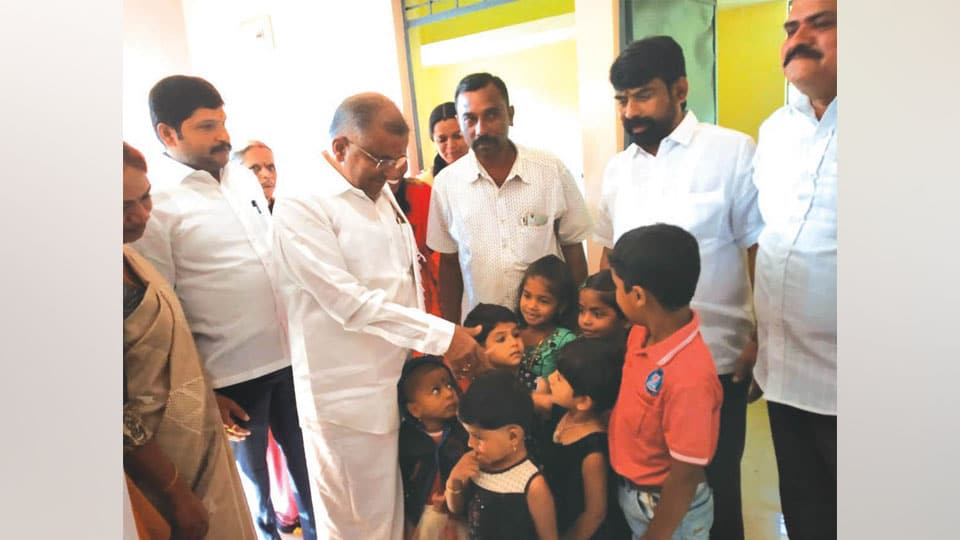 Mysuru: Taking a cue from coalition government’s ambitious initiative of taking the government to the doorsteps of people, District in-charge Minister and  Chamundeshwari MLA G.T. Devegowda (GTD) embarked on a day-long public contact programme in his assembly segment last Friday.

At Shettanayakanahalli, the Minister laid the foundation stone for a library building costing Rs.9 lakh and for an anganawadi building estimated to cost Rs. 6 lakh.

He also visited the Anganwadi centre Nuggahalli and enquired about the quality of food served to children under mid-day meal scheme. Upon Learning that the Anganwadi had no toilet, the Minister directed the PDO to construct one immediately.

As he toured the villages, the Minister received complaints from some Dalit colonies that CESC personnel were demanding money for installation of meters.

The Minister asked CESC officials not to give scope for such complaints and instructed them to provide power connections to all houses under ‘Nirantara Jyoti’ scheme. Taking note of the drinking water problem in some villages, Devegowda directed the officials to take appropriate measures so that no drinking water crisis surfaces in any of the villages, with summer fast approaching.

Devegowda was given a rousing welcome in all the villages which he visited.

Speaking to presspersons, GTD said that the State Government was mulling on hiking monthly pension to Rs.2,000  to all beneficiaries covered under various social pension schemes.

Announcing that the PWD has sanctioned Rs.100 crore for improvement and upgradation of roads in Chamundeshwari Assembly segment, he said that there is a proposal for three lift irrigation projects in Mysuru Taluk, totally estimated to cost Rs. 85 crore and he had talked to the Chief Minister in this regard.