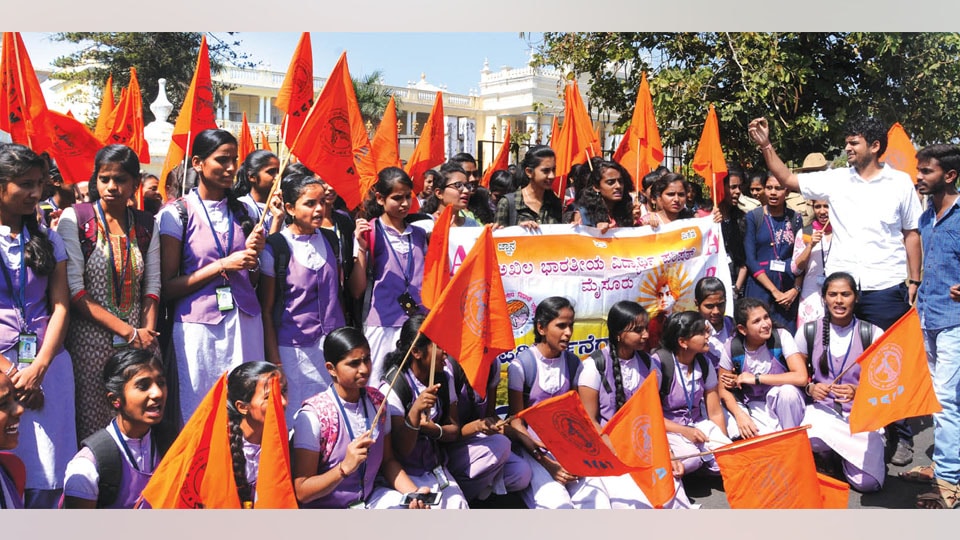 Mysuru: Hundreds of students under the banner of Akhila Bharatiya Vidyarthi Parishat (ABVP) staged a demonstration in front of Crawford Hall here this morning seeking clarity from the University on the newly-introduced (2018-19) CBCS (Choice Based Credit System) scheme in the first grade colleges coming under the University of Mysore (UoM).

Claiming that the CBCS was introduced without proper preparations and that even College Principals and faculty were confused over the scheme, the students alleged that there were grave discrepancies and lapses in evaluation of answer scripts, which has badly affected thousands of students.

Maintaining that revaluation charges of Rs. 1,100 per paper and Rs. 600 fee for single photo-stat copy of answer scripts were too high, the protesters demanded a steep cut in the charges stipulated by the University.

Alleging that the evaluation of answer scripts had gone haywire, the students wanted to know how the marks or grade was awarded under the scheme.

Pointing out that many merit students were declared failed while poor performing students had secured high marks, the protesters accused the University authorities of serious lapses in evaluation which had resulted in a mess.

They urged the University authorities to cut down revaluation fee, address technical faults in the declaration of results, involvement of all stakeholders in continuation of the scheme and a credible evaluation of answer scripts so that no student suffers from any lapses.