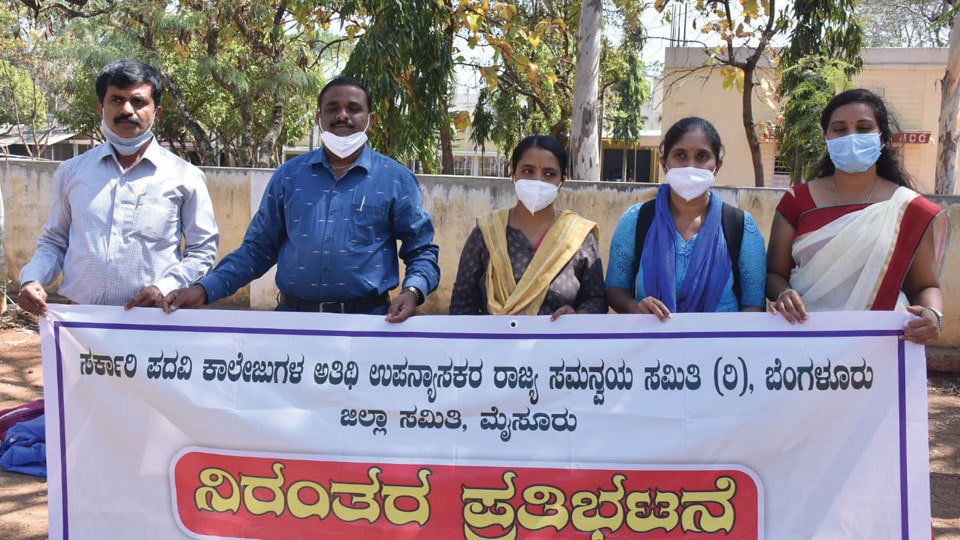 Mysore/Mysuru: Guest lecturers, under the banner of Government First Grade Colleges Guest Lecturers State Co-ordination Committee, staged a demonstration in front of the DC’s Office here this morning and urged the State Government to continue the services of guest faculties of 2019-20 during the academic year 2020-21.

The protestors alleged that the Education Department on Jan. 19 had issued a circular to appoint only fifty per cent of guest faculties (7,091 out of total 14,183) and continue their services till Mar. 2021, which will be an injustice to those who have been serving as guest lecturers for many years.

The protestors also demanded the Government to consider them as Corona Warriors and provide job security to them. Co-ordination Committee District President Hanumantesh, Vice-President Shyamala, Secretary Deepashree, Dr. J.C. Ravindra and others were present.

Protestors alleged that the Forest Department was stating that they have employed 143 daily wagers and had credited their salaries to their bank accounts, but the association is unaware of persons being hired and also details of their salaries being credited. They demanded to know on what basis contractors are employing daily wagers. The protestors also demanded abolition of contract system and urged to provide FDC salary for those who have completed graduation.