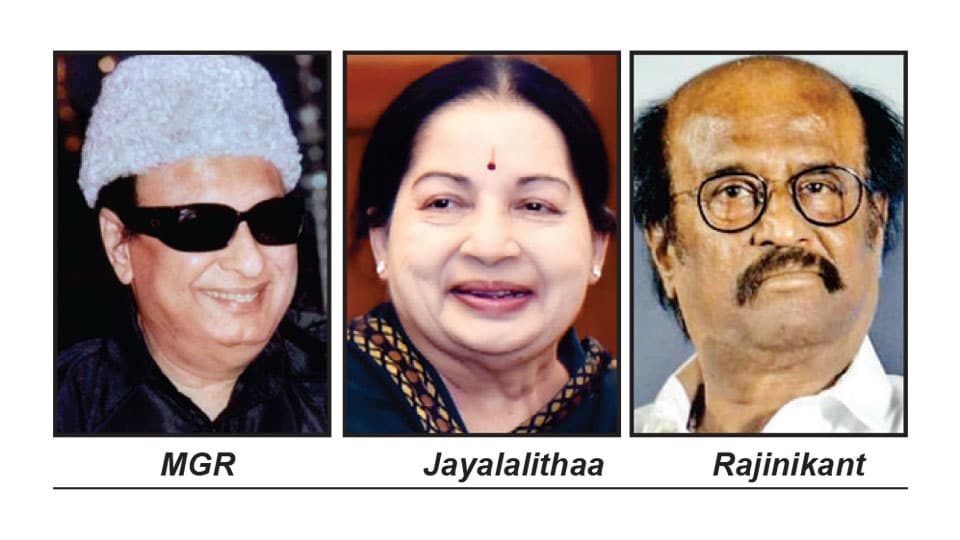 Mgr could, Jaya could, Rajini can’t

Rajinikant had publicly announced his decision to enter politics, a decision that would have changed Tamil Nadu politics drastically.  He was set to reveal the name of his party on December 31.  Then he fell ill.  Seeing that as an order from God, he said: “I regret to announce that I am not in a position to launch a party.”

But finally he fell. He took to the modernist devise of Twitter to announce, not his political party,  but his intention to form a political party.  He was already on record with the statement that there was a leadership vacuum in Tamil Nadu. In the flowery language of a film script, he said: “With great support from people, in the upcoming Assembly elections, an honest righteous, transparent, corruption-free, casteless, secular and spiritual politics will be formed in Tamil Nadu for sure.” He coined  the hashtag ippo illattai eppo, if not now, when? The clarion call was: Let us change, let us change everything. A Tamil phrase was devised, probably to impress locals as well as outsiders. The brave term was: Maathuvom — ellatheyum maathuvom.

What Rajini could not hide was that he had been under BJP’s pressure for long. Being essentially a northern idea, the BJP has been unable to take root in Tamil country. Rajini had to take this into account; despite his ties with BJP friends, he was forced to adopt an independent posture in the launching of his formal party.  Three auspicious dates were finalised, all of them in January, for the final announcements and the formal inauguration.  Then God intervened.

Rajini’s bid to enter politics should not be seen as a continuation of the Tamil tradition of film stars taking on political leadership. The gap between him and the stalwarts of an earlier era is too wide to be ignored. C.N. Annadurai, who brought cinema and politics together, was a thinker and a pioneer.  His was not a narrow provincial mind. He understood the primal force of language in nation-building and accepted it as a factor that separated Dravida tradition from Aryavarta. MGR apprenticed with Annadurai for long, thus qualifying as a politician. Jayalalithaa in turn apprenticed with MGR and turned herself into a formidable politician. Rather than benefit from the film industry, these mass leaders let the film industry benefit from their politics.  And let no one forget the humiliations that Jayalalithaa had to go through before she attained invincibility.

Rajinikant does not fit into MGR-Jaya shoes because, among other things, he did not have a period of apprenticeship under masters of the genre. He had no recognised veterans to mentor him. He has been only a filmic hero with no political credentials. In a land where even living Gods like Shivaji Ganeshan were not acceptable as political heroes, it was over-ambitious for Rajinikant to expect God-hood on the strength of mere filmic stardom.

After all, there are limits that Rajinikant must necessarily face when he is trying to cash in on Dravida pride without being Dravida. There are limits that must be taken seriously when Shivaji Rao Gaekawad wants the filmic stardom of Rajinikant to be automatically transferred to him for purposes of partisan politics. Rajini Gaekawad cannot eat the cake of C. N. Annadurai’s glory and have it too. Everything is possible in filmland. Politics is different.  It is a harsh field where courtesies yield to the power game.

Ask Kamala Haasan. He has been acting and talking like a seasoned politician for quite a while. He even floated his own party, fondly named Makkal Needhi Maiam. But where are the makkal? Will Rajinikant fare any better with makkal, especially when he is tied down to a political philosophy represented by the BJP which has found no takers among his kind of makkal? The lesson to learn is obvious: Stardom in filmland is no automatic route to stardom in politics.

That Rajini describes his politics as spiritual betrays the confusion in him. Mixing politics with spirituality is like mixing milk with rum. The wise will have either milk or rum. The otherwise, unable to distinguish white from dark brown, will end up missing both the elixirs.