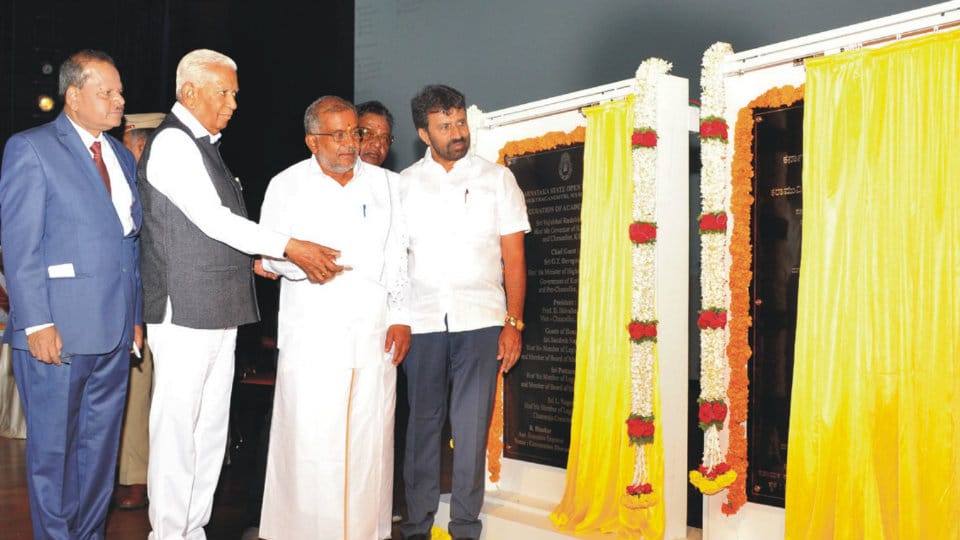 Mysuru: It was a red-letter day for Karnataka State Open University (KSOU) today as after years of stalemate arising out of derecognition by University Grants Commission (UGC) in 2015, Karnataka Governor and Chancellor of State Universities Vajubhai R. Vala inaugurated the plush Convocation Hall at Muktagangothri, the KSOU campus in city at around 11.15 am. The Governor also inaugurated the Academic Bhavan at Mandakalli.

Along with the inauguration of Convocation Hall and Academic Bhavan, Higher Education Minister G.T. Devegowda, who is also Pro-Chancellor of KSOU, inaugurated the nine Regional Centres set up at Mandya, Chikkamagalur, Davanagere, Ballari, Chamarajanagar, Shivamogga, Hassan, Kolar and Tumakuru.

These centres too have swanky buildings and the university has spent crores of rupees in building them. The Convocation Hall, Academic Bhavan and the Regional Centres were inaugurated after the Governor and G.T. Devegowda pressed the remote-controlled buttons that unveiled the screens where the plaques of the buildings were displayed.

In his address, Governor Vajubhai Vala recalled the predicament faced by the KSOU and lakhs of its students after UGC derecognised the courses from 2012-13 through a public notice in June 2015. He said that the UGC had taken this step due to violation in its jurisdiction and other guidelines.

“The past Vice-Chancellors have to be blamed for the mess and for playing with the future of lakhs of students,” Vala said.

Without naming any former VC, Governor Vala said, “VCs who were administering the KSOU in the past ignored several notices sent by the UGC and sat on many warning letters. “This neglect forced the UGC to take the ultimate step of derecognition,” he said.
The Governor, pointing his hands at the present KSOU Vice-Chancellor Prof. D. Shivalingaiah, said that he (Shivalingaiah) had struggled a lot to get back the recognition. “His frequent meetings with UGC Chairman, Karnataka Government and other authorities have resulted in UGC granting back the recognition,” Vala said.

In his address, Minister G.T. Devegowda said that the KSOU was on the right track now after suffering years of derecognition and adverse publicity. He said that the KSOU was a saviour for all those students who want to pursue distance education and at the same time continue in their profession without any break. “We are with you,” he told the KSOU VC asking him to initiate good academic programmes. 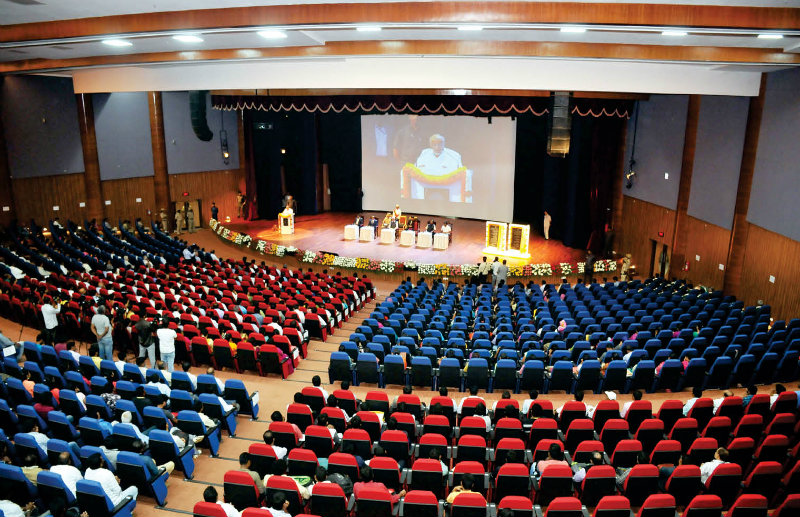 Convocation Hall to be rented out

The KSOU Convocation Hall that was inaugurated by Karnataka Governor Vajubhai R. Vala this morning  is not restricted just to programmes of KSOU but will be rented out for people and organisations to hold events.

Already, the Hall has been booked by Confederation of Real Estate Developers’ Associations of India (CREDAI) for an event on Dec. 6 and 7. Central Food Technology and Research Institute (CFTRI) has booked the Hall for Dec. 12. KSOU authorities said that there are over seven to eight enquiries regarding the bookings and they will be confirmed after receiving a letter from them.

The rent for academic programmes is Rs. 1 lakh per day and for all others it is Rs.1.50 lakh per day. Built at a cost of Rs. 18.50 crore, the Hall can seat over 2,000 people in a built-in area of 3,000 square feet. It has features like wide wooden-floor stage, nine doors, central air-condition, projector facility and advanced fire engine facilities. It is one of the biggest and well-equipped auditoriums among the State Universities. There is wide space for parking and food arrangements and catering at the basement.