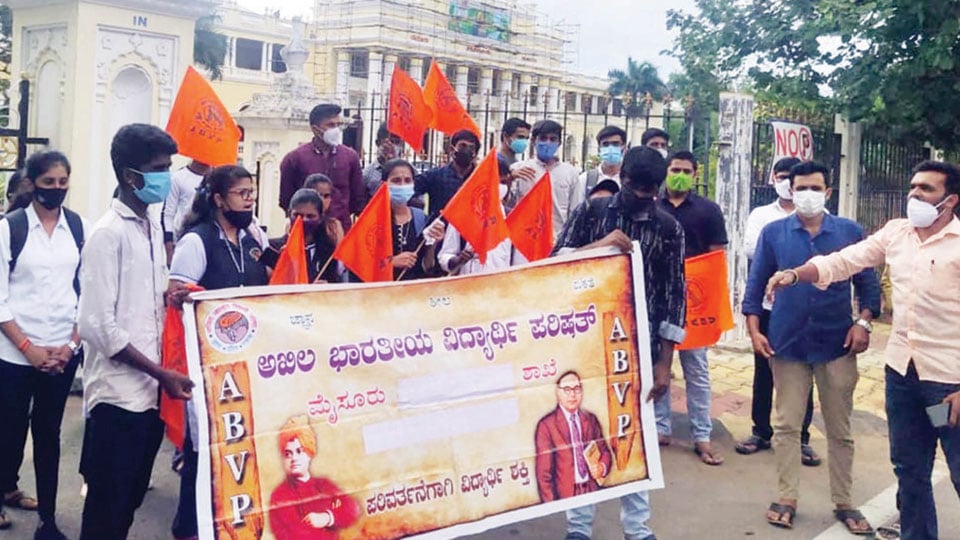 Mysore/Mysuru: The members of Akhila Bharatiya Vidyarthi Parishad (ABVP), staged a protest yesterday in front of Crawford Hall, urging for an impartial probe into the alleged sexual harassment  by a University of Mysore Professor on a research scholar.

The protestors said that the Varsity authorities should not neglect the incident and conduct an impartial probe as such incidents were taking place now and then. A lot of girl students from rural areas come to study at the University and such incidents were creating a sense of fear among them, which would hamper their education and urged the State Government to bring out the truth before the public.

It may be recalled that the Professor, who had called the lady research scholar to his house had allegedly sexually harassed her recently.

The Professor’s wife, who too is a Professor at the University, took the research scholar to Jayalakshmipuram Police Station and helped the victim to lodge a complaint. University of Mysore VC Prof. G. Hemantha Kumar, reacting on the issue said that the incident was making rounds on social media and the Professor’s wife had called him over the phone and informed him about the incident and sought his permission to file a complaint at the Police Station which was given.

He further said that if a FIR was registered and the accused is in judicial custody for 24 hours, the report will be sought which will be put forward in the Syndicate meeting to take further course of action.

City Police Commissioner Dr. Chandragupta had stated that this incident was being discussed since 3 pm on Thursday. He also informed that Police officials had informed him that the Professor couple and the victim had come to the Police Station and he had instructed the Police officials to register the complaint, but till late night on Thursday, no one had filed a complaint.