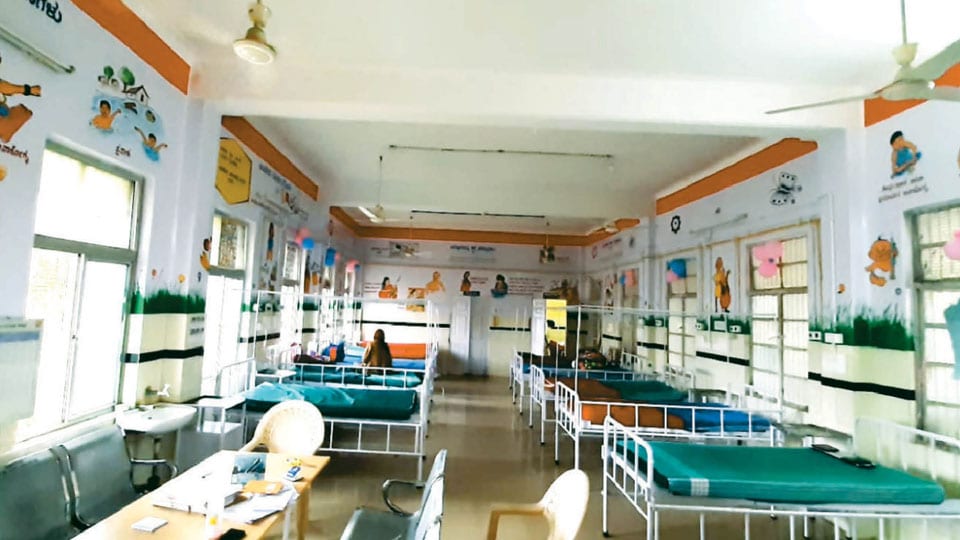 Mysore/Mysuru: The malnourished children rehabilitation centre at Cheluvamba Hospital in the city has now turned into a child-friendly ward, wherein children are getting nutritious food and play time.

Child Fund India has joined hands with HOPE, an NGO, in bringing about a transformation to the Cheluvamba Hospital centre. The child-friendly ward has been made more attractive with paintings on walls that fascinate children and adults alike.

Apart from paintings on the stages of growth of children, the wall paintings also include drawings of a variety of vegetables, educative information on hygiene and nutritious food, tales from Chhota Bheem and wild animals. The ward now also has many child play equipment that are found in parks.

The malnourished children rehabilitation centre was opened at Cheluvamba Hospital in 2013, according to the Hospital’s Medical Superintendent Dr. Sudha Rudrappa. This centre, which has now been transformed into a child-friendly ward, has a Doctor, two Nurses, a Dietician and cooking staff, she said and added that the cause of malnutrition will be explained to the parents and will be suitably advised on nutrient rich foods.

Cheluvamba Hospital’s Resident Medical Officer (RMO) Dr. Rajendra Kumar said that 40  malnourished children from the districts of Mysuru, Chamarajanagar, Mandya, Kodagu and Hassan are getting admitted here in a month and so far in August, nine children have got admitted.

Each child admitted at the centre will be taken care of for about 10 to 14 days and the mother of each child will get Rs. 275 per day as stay and care allowance. The monetary assistance is being provided to ensure that no mother, who works as a labourer, is deprived of her earnings. The money will be directly credited to the Bank Account of the mother, he said.

Continuing, he said that the transformed centre has 10 beds, where severely malnourished children and children suffering from anaemia will be admitted and taken care of. After about two weeks of care, the children will be discharged, when the mothers will be given a prescription on the nature of food to be given for her child.

Nurse Jyothi of the Centre said that every child will be given nutritious food including milk and egg, three times a day. Also, the mothers will be taught on preparation of nutrition-rich foods such as sweet laddu, kichdi, mixed vegetable dish etc., she added.