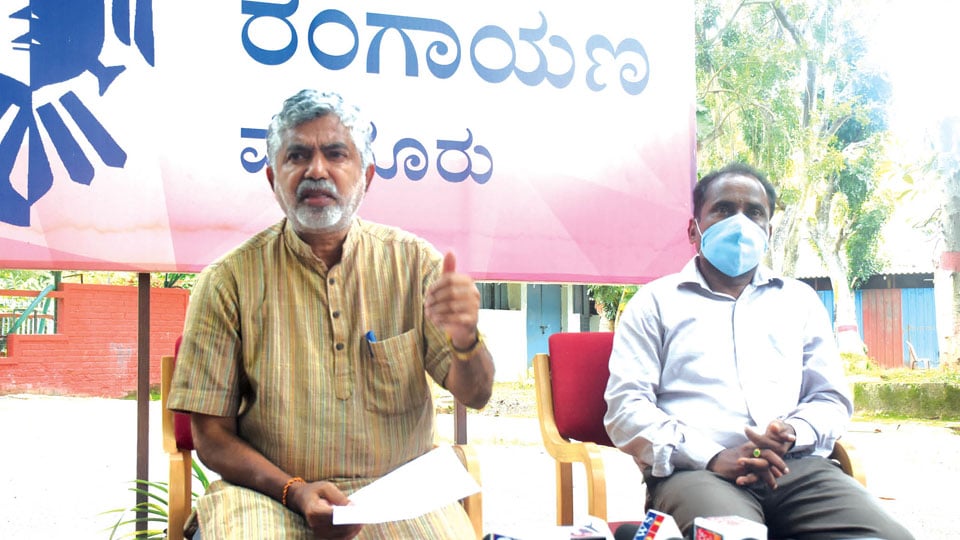 One more stage added at Rangayana to hold theatre activities

Addressing a news conference here yesterday, he said this Ranga Chavadi has been created in recognition of the rich contribution of ‘Ranga Bhishma’ B.V. Karanth who strove hard for the development of this theatre repertory to promote theatre in the State. This Chavadi has been created out of very small expenditure without seeking financial assistance from the State Government but with the help from of donors, and by using the own resources of the repertory. The Chavadi will be helpful for students of Bharatiya Ranga Shikshana (BRS) to learn yoga, martial arts and folklore along with other regular theatre related learning. Many art and cultural programmes could be held in this new facility, he added.

Cariappa said that the Chavadi has been built at a cost of Rs. 8 lakh and has basic facilities. Plans are afoot to add the gallery for spectators. Noted theatre activist, Jairam Patil of Mysuru has extended his co-operation in the completion of this project.

On Aug. 9, Minister Somashekar will open this Chavadi. MLA L. Nagendra, MUDA Chairman H.V. Rajeev and Jairam Patil will participate during the inaugural. He (Cariappa) will preside over the function and Joint Director V.N. Mallikarjunaswamy will be present, added the Rangayana Mysuru Director.

On the same day evening, the ‘Chavadi Sageetha’ has been organised in which Ramachandra Hadpad will perform. At 7.15 pm, there will be Taala Maddale programme on ‘Bhishmarjuna Kalaga’ by Sri Anjaneya Mahila Yakshagana Sangha, Puttur.

In connection with platinum celebrations of India’s Independence Day, he said, three dramas are planned for learning of which Macbeth of William Shakespeare is ready and two others will be ready during the current month.

On August 11 at 6.30 pm, as part of learning, BRS students will be staging a drama ‘Kadadida Neeru’ written by G.B. Joshi and directed by Manju Kasargodu at Sriranga.

On the eve of Independence Day, patriotic songs will be presented by BRS students at the Chavadi at 6.30 pm. This will be the first ‘Raaga Rangayana’ after the Corona crisis. As part of learning, students will present a drama ‘Tamra Patra’ written by Debashish Majumdar and directed by Apoorva Anagalli on August 15 at 6.30 pm at the Ranga Chavadi. This drama revolves around a freedom fighter.

A 10-day training camp has been started by the Scheduled Castes artistes to stage street plays to create awareness on the tenets of the Constitution, as part of Special Composite Planning of Department of Kannada and Culture. It is directed by Katyayini. After 10 days of training, they will stage the street dramas for ten days by visiting various places in city. They will stage drama twice a day. All these programmes will be shown live on the Rangayana website and Facebook. The Covid guidelines are strictly followed, he added.

Rangayana has suffered huge loss due to lockdown following COVID-19 pandemic. The grants from the State Government to theatre repertory have now reduced to Rs. 60 lakh from the earlier Rs. 3 crore to Rs. 4 crore. This has made them to manage Ranayana. The electricity bill will be around Rs. 1.5 lakh for three months due to staging of dramas and training for students, Cariappa said.

The Rangayana earned Rs. 9 lakh by staging seven shows of Dr. S.L. Bhyrappa’s ‘Parva.’ They were supposed to stage more shows but that did not happen due to Covid lockdown. There is a thinking to hold more shows if the Government guidelines are convenient to hold public performances, he noted.

Cariappa flayed University of Mysore (UoM) for not including the subjects on theatre and drama in K-SET held last month. There was a subject under the head Performing Arts which included theatre, drama, music and dance. But 85 percent of questions were pertained to dance and music but nothing on drama or theatre.

There were questions on westerners but nothing on the history of Kannada and its development. “I will condemn this decision of the Varsity on behalf of Rangayana artistes. Such mistakes must not be repeated in future,” he said.