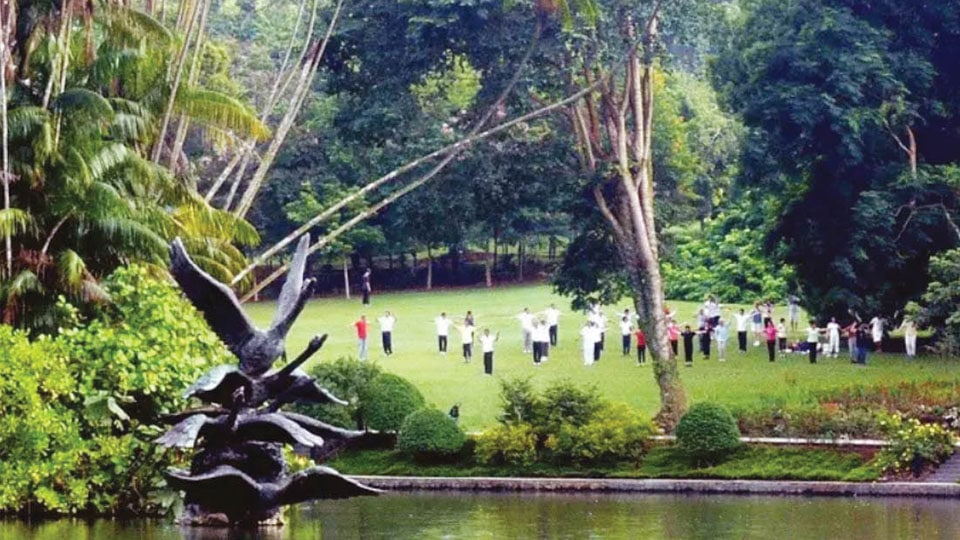 A simple story: A woman came out of her house and saw three old men with long white beards sitting in front of her yard. She did not recognise them and said “I do not think I know you but you look famished and hungry. Please come in and have something to eat.”

Is the man of the house home? one of the old men asked. “No” she replied. He is not in, then we cannot come in they said in unison. In the evening when her husband came in she told him what had happened.

He told her, “Do go and tell them that I am home and invite them in. The woman went out and invited the men in. Madam, we do not go to the house together, they replied. “Why is that?” she asked.

One of the men explained, his name is Wealth, pointing out to one of his friends and then he pointed out to another and said, he is Fame and me, I am Health. Then he added, now go and discuss with your family and tell us which one of us you want in the house. The woman went inside her house and told the family the man’s conditions and asked her husband, “Which of these three men do you want me to invite?” The man was quick to respond, “Wealth” of course. Call him in immediately.

The woman did not agree. She said it is important to be a celebrity. I always wanted to be on a magazine cover or photographed. We are an ordinary family and we can become famous overnight. So let us call “Fame.” Both husband and wife started to argue. Her mother-in-law who was nearby quietly said, “Nothing is more important than Health. You cannot enjoy Wealth or Fame unless you have good Health. So call Health inside.”

Unwillingly, the woman came out and told the group that the family had decided to call Health inside. As soon as he started to go in, Wealth and Fame also started to follow. The woman, perplexed asked, “You had told me that only one of you would come in and now all of you are following Health. Why?” So one of them replied, “If you had chosen either Wealth or Fame only one of us would have come but since you have wisely chosen Health, we have no choice but to go along with him. Where Health is there, Wealth and Fame automatically follow.

Health is Wealth is a very old saying, but why is that we in India do not give importance to health. Recently I had been to Singapore to spend some quality time with our grandchildren. Since we had been to Singapore many a times, we did not venture out for any sightseeing because of the excessive heat and humidity. But to me the unique thing about that city, which has ensured the prosperity of that city is the importance Singaporeans give for health. Come rain or shine, everyday morning on the beach front or lake side, one would find hundreds of young men and women walking, jogging, cycling or running. Frankly I could hardly see an obese Singaporean. Partly this is due to their diet but it is also due to the constant exercise they do.

Opposite our flat in Singapore was a Lake. I went for a walk at 6 am, there were about 300 persons, from 20 years to 70 running, jogging or walking. I could view the Lake from our flat and in the evening, till late night too the whole place would be crowded. Surprisingly hundreds of Indians too would be walking late evening after their work or dinner. Children in the schools are weighed and if found overweight, the parents are called and informed to have a check on their diets! Imagine this in our schools.

The reason I brought out this particular point is that I am also a regular walker and to my dismay I find that only the middle aged, old and the very old come out to walk. Where are the youth of this city? I hardly find any young girls or boys spend time in the open jogging or walking in the morning or evening. I am not talking of the well do to youth who throng the gyms across the city but the aam aadmi, the so-called common man and woman. Why is that we Indians give so less importance to health? A healthy body automatically means a healthy mind. Healthy mind means a healthy society and healthy society means a healthy country.

According to a survey conducted by ipsos, a global market research company, Indians if asked to choose between dieting and enjoying their food, prefer the latter. The study shows that 77 percent of Indians would prefer to choose food if given a choice between eating and being thin. 74 percent also it seems felt that all diet plans ultimately fail ! It is also a fact that lots of youngsters in India do some quick fixing to ensure that they are healthy looking just before marriage and the moment the event is over go back to their old diets.

Let us admit it, we are a race of lazy people, health is of least priority. One has to just see the pot bellies of our people around. Health awareness has to be taught from young and formative years. When my grand-daughter, 7 years old, eats only one ladoo per day and tells me that it is her quota for the day, I felt happy that at this formative age itself she has become aware of her health. She is Indian alright by birth but has become a Singaporean in mind.

A recent celebrity advertisement caught my attention few days back. “Walk 6,000 steps a day”. Celebrities were asking people to walk at least 6,000 step a day for 100 days. I do hope that these ads do encourage our lazy youth to start walking, jogging or running at their convenience. At the cost of repetition, good health means better nation. Do you agree?

Health N.K.A. Ballal Wealth
Left is North, Right is South
Lest we forget their sacrifice-3: The story of Field Marshal K.M. Cariappa