Home » Feature Articles » Lest we forget their sacrifice-3: The story of Field Marshal K.M. Cariappa 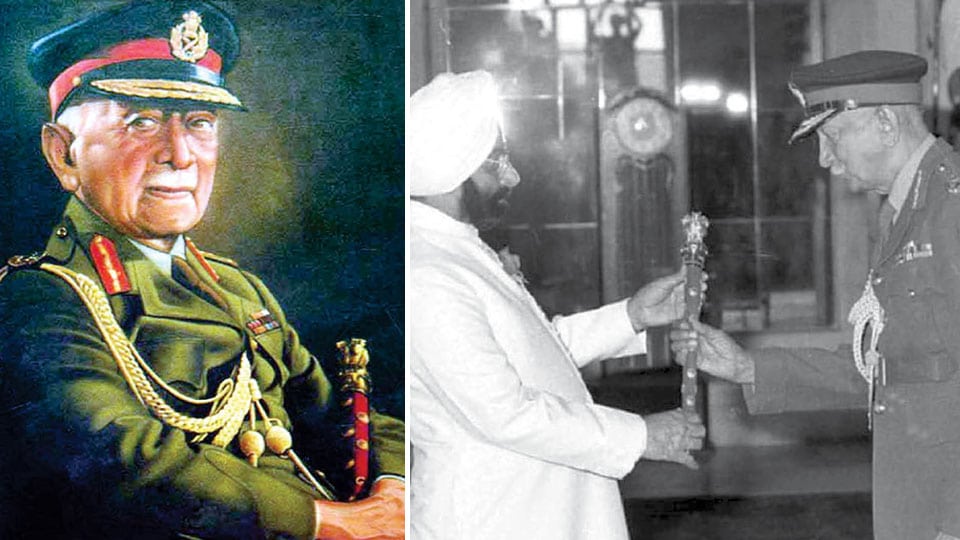 Lest we forget their sacrifice-3: The story of Field Marshal K.M. Cariappa

Gen. K.M. Cariappa was the first Indian Commander in Chief (C-in-C) to take charge. He assumed the office on 15th January, 1949. He was instrumental in introducing ‘Brigade of Guards’ and the ‘Parachute Regiment.’ His instruction to the Army to actively take part in the relocation efforts for ten lakh refugees was greatly lauded. He laid out plans for steadfast modernisation of the Indian Army. He ensured ‘de-politicisation’ of the armed forces for decades to come. He played an active role in the integration of the forces under the command of the Princely States into the Unified Central Command. He quelled Chinese incursions into Rina Tata, Assam and warned Nehru of future incursions — a piece of advice which sadly fell on deaf ears — exactly a decade later, China would wage a full blown war! For fear of politicisation, Cariappa rejected the integration of the INA (Indian National Army) into mainstream forces, but nonetheless borrowed their slogan ‘Jai Hind.’

General K.M. Cariappa retired from active duty on 14th January, 1953. Brigadier Rajendra Singh presented General K.M. Cariappa with a silver statue of the Indian Soldier. This memento would find place on the mantle of his fireplace next to the photographs of his mother and father. Some years later, he accepted the position of Indian High Commissioner to Australia. Incidentally, General Slim was Governor General of Australia at this time and the two seem to have had a fruitful time together, yet again! By 1956, Cariappa was back in Madikeri for good and built a house by the name of ‘Roshanara’ on a 50-acre plot, formerly owned by a British planter. General Cariappa divided this land and gave away few acres to his brother, some to an orphanage and the rest to Madikeri City Council. The little pond on his estate still supplies drinking water to the citizens of Madikeri.

Cariappa was awarded the Legion of Merit by the American President Harry S. Truman. His brief stint in politics was not met with much success. He contested the Lok Sabha seat for North East Bombay as an Independent candidate against Krishna Menon and J. B. Kripalani and lost.

General K.M. Cariappa is believed to have loved listening to M.S. Subbulakshmi’s devotional recordings. His taste in Western Classical Music was well- known. He enjoyed long walks in the Devarakadu, chasing tree smugglers. He dedicated an hour every day replying to a mountain of letters addressed to him. After an hour’s rest, he would spend the evening playing cards with his brother. General K.M. Cariappa was appointed as the President of ‘All India Council of Sports’ at this time. He was a devotee of Swami Shivananda and Sri Sathya Sai Baba. He loved playing Polo in his free time. He would always have chocolates in his pockets for children.

During the time of Chinese Incursion, General Cariappa travelled across the country galvanising the youth to join the Army. He travelled to Pakistan on more than six occasions in attempts at brokering peace. In the 1965 war with Pakistan, General K.M. Cariappa’s son Air Marshal Nanda, who parachuted into the Pakistan territory, was captured as a Prisoner of War (PoW) by Pakistan. General Ayub Khan sent a word to General K.M. Cariappa that, if he so willed it, his son would be released immediately and that he was being taken care of very well. General Cariappa replied saying that, all the PoWs were like his children and that all of them should be taken care of as per Geneva Convention. In January of 1966, most of the PoWs were eventually released back to India.

At a time, when our people seem to have developed doubts about the sacrifices of our armed forces and possess the temerity to ask for ‘evidence’ for their heroism and valour, let us remind ourselves of the legends who have gone by, without whose sacrifice and forethought, we wouldn’t have the unified country, which we take for granted today !

ONE COMMENT ON THIS POST To “Lest we forget their sacrifice-3: The story of Field Marshal K.M. Cariappa”