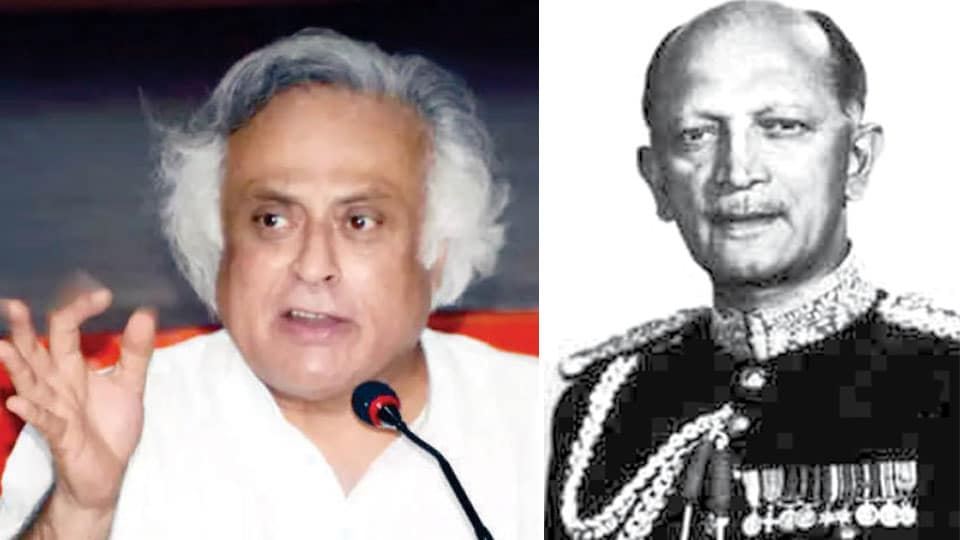 Be that as it may, in retrospect, one will wonder if what the General Cariappa had said in 1970 was prophetic because Indira Gandhi soon in 1975 declared Nationwide Emergency which is similar to a military rule in its enforcement and it also turned out to be temporary for two years. This being the context and situation for the General’s opinion, what Jairam Ramesh said, and as reported in the Press, gave a wrong understanding to the public.

V.K. Krishna Menon was a famous name as a great orator and Pandit Jawaharlal Nehru’s great friend and alter ego. Naturally, he was a Leftist and pro-Soviet Union. He was the High Commissioner of India in London and later the Defence Minister of India. He also became famous for arguing the  case of India in the United Nation’s Security Council on the Kashmir issue as one who delivered the longest speech ever in the world body.

There have been several biographical studies of him, but almost all of them were biased and partisan — either pro-Menon or anti-Menon. In India and even abroad, his detractors were legion. There was hardly a definitive biography of Krishna Menon, according to T.J.S. George who I think was the earliest biographer of Krishna Menon and the book, as George himself confesses in his recent article, was a partisan account. However, George, as always, is highly readable and naturally must have sold enough and more copies of the book.

In his article, George has discussed the latest biography of Krishna Menon titled “A Chequered Brilliance: The Many Lives of V.K. Krishna Menon” by Jairam Ramesh, again a Left intellectual and a Congress loyalist. In book publishing, no matter how high and tall the author of a book is, he needs publicity to sell his books. Even a hen screams aloud her cackle to tom-tom to the world when she lays an egg. It is in this exercise that Jairam Ramesh is going around the country to meet the Press or to speak in the Book Clubs and Literary Festivals about his new book.

READ ALSO  Of Journalism and Journalists !

In one of his such publicity programmes, he was in Bengaluru a couple of days back to participate in the ‘Times Lit Fest’ and discuss about the ‘relevance of political biography’, apparently focussing on his new book. He spoke of Veer Savarkar and others and also Field Marshal K.M. Cariappa in the context.

It appears a signed note of April 7, 1971 was recently discovered in Karnataka State Archives. The note was a clarification for the public after (then) General Cariappa had met the then Prime Minister, Home Minister and Speaker of Lok Sabha following a Parliamentary debate about his comments advocating these measures in an informal talk with the Press in Dhanbad in March 1970. According to reports, the General issued a clarificatory note stating that he was in favour of “a military rule, only as a temporary measure to put things right in the country.” This was in 1971 after Indira Gandhi won a landslide victory in the Lok Sabha elections of 1971.

Be that as it may, in retrospect, one will wonder if what the General had said in 1970 was prophetic because Indira Gandhi soon in 1975 declared Nationwide Emergency which is similar to a military rule in its enforcement and it also turned out to be temporary for two years.

This being the context and situation for the General’s opinion, what Jairam Ramesh said, and as reported in the Press, gave a wrong understanding to the public.

Field Marshal K.M. Cariappa is known as a great nationalist, patriot and a democrat from his speeches and writing over the years even before and after he retired. Field Marshal Cariappa is also a great humanitarian and as a result landed in trouble when he was the Indian High Commissioner to Australia and New Zealand  in 1953 – 1956. The reason was that he questioned the “White Australia” immigration policy that was in vogue since 1901.

But one should remember that General Cariappa’s campaign went a long way in shaping liberal thoughts in Australia and the immigration policy was finally changed in 1973.