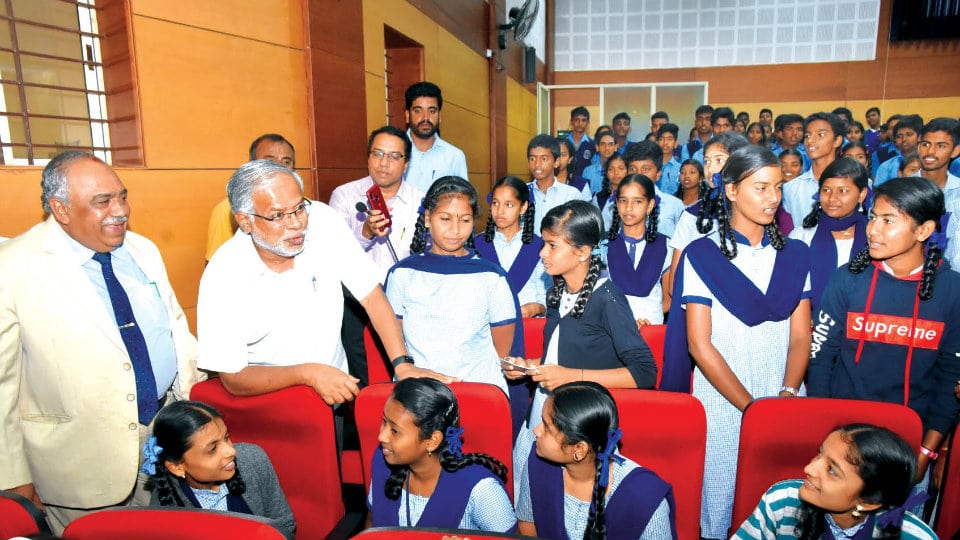 Mysuru/Mysore: To achieve excellence in the field of science and technology and to promote good learning of these subjects right from secondary school stage where students are at a transformation stage, the Committee for Development of Science in Schools, University of Mysore, in association with Doordarshan’s Chandana Channel, had organised an interaction programme with Primary and Secondary Education Minister S. Suresh Kumar in city this morning.

The Science Interaction Programme was held at Vijnana Bhavan where the Minister interacted with over 200 High School students from Mysuru, Mandya, Chamarajanagar and Hassan. The day-long interaction will end at 5 pm. The Minister was impressed by the questions asked by the students and their theories based on basic science or pure science. Many ideas were polished and needed further innovation for the betterment of the humanity, the Minister felt.

The interaction between students and Minister and Professors of University as well as Scientists of Central Research Institutes is the first-of-its-kind in the country. With financial assistance from Karnataka State Science and Technology Promotion Society (KSTePS), Mysore Varsity has already established a Mobile Science Laboratory which is being taken to various Government High Schools in the rural areas.

In addition to allowing the students to perform science experiments, they are provided an opportunity to interact with Professors from the University Science Departments and Scientists from reputed schools.

Interacting with students, the Minister said curiosity leads to scientific experiments and the result will better human life. Scientific temper must be nurtured at a young age and there must be a thrust on pure science, he opined.

“I am seeing some future scientists here. Students are participating in this event with enthusiasm. I welcome them to the world of knowledge. Nowadays, students are moving towards Arts and Commerce in more numbers. I was observing the questions asked by the students. Suchitra, a student of Hootagalli asked a brilliant question. She says everyone knows that the earth goes around its orbit. It takes a day to reach the United States in flight. She asks why can’t we stay in the sky and come down when the US comes beneath us,” he said.