Home » Feature Articles » Lest we forget their sacrifice-2 : The story of Field Marshal K.M. Cariappa 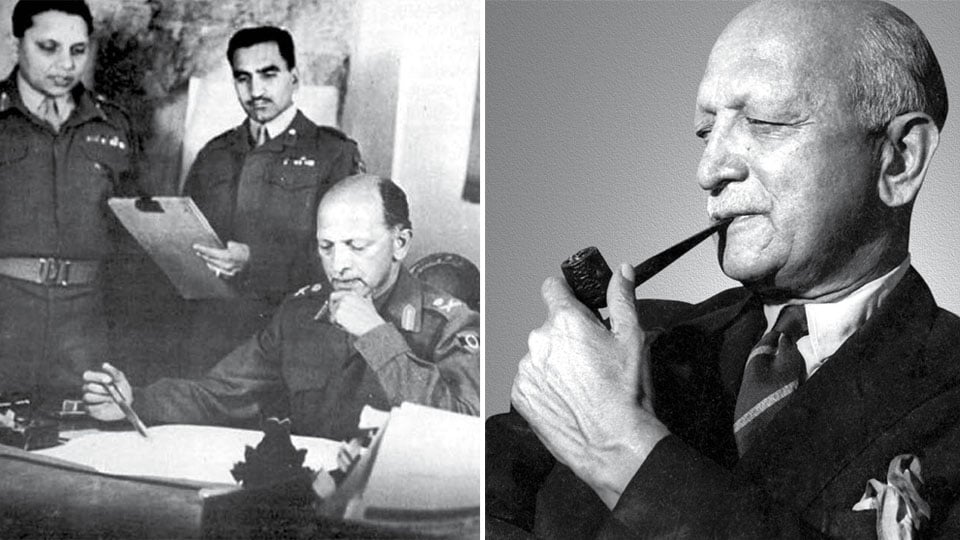 Lest we forget their sacrifice-2 : The story of Field Marshal K.M. Cariappa

Many of the top officers were being short-listed by the British to be groomed into future Commanders of the Indian Army with Independence just round the corner. Among these were J.N. Choudary, N.N. Vandu, N.T. Naqvi and K.M. Cariappa. These chosen few were sent to ‘Imperial Defence College (IDC)’, London, for further training. As luck would have it, General Slim was the Chief of IDC then. The increasing communal tensions in the months leading up to the Partition wore heavily on the minds of these Officers. In order to quell the communal tensions, K.M. Cariappa on his return from England mooted the idea to Nehru and Jinnah not to divide the Army between India and Pakistan, but to keep it status quo. This idea found favour with both Nehru and Mountbatten, but sadly not with Jinnah!

K.M. Cariappa’s goal was to keep the Army united for five years after Independence before gradually and slowly dividing it. Sadly this was never accomplished. Instead, on the day of Independence soldiers and officers were given a choice to join either Indian or Pakistani Armies. Cariappa who had recently been made Major General was officially appointed as ‘Deputy Chief of General Staff’. He threw a farewell dinner party at the Delhi Gymkhana Club to his Pakistani counterparts, where he raised a toast saying “Au Revoir” (We will meet again) and not “Auld Lang Syne” (Goodbye)! His gesture of goodwill and friendship was sadly not reciprocated by the Pakistan Army.

Towards the end of 1947, General Cariappa was elevated to the rank of Lieutenant General and was appointed as Eastern Army Commander. Just three months down the line, the deteriorating geo-political landscape in J&K made the Government get Cariappa back in Delhi as GOC-in-C. His first action in this capacity was to move the Western Command HQ to Jammu. He decentralised the command for greater penetration and appointed Lt. Gen. Kodandera S. Thimayya as GOC Jammu & Kashmir Force and Atma Singh as GOC of Jammu Division.

When General K.M. Cariappa met Gandhiji for the first time, he was observing his day of silence at the Birla House. Cariappa who never digressed from his attire is rumoured to have taken off his shoes before entering the Mahatma’s chamber. When someone asked later the reason for this, he apparently replied “When one is going to see a Godly person, keeping one’s shoes on is mighty disrespectful.” In their later meetings, Gandhiji repeatedly broached Cariappa’s plans from a military perspective.  Cariappa’s answer on one such occasion is quite telling — “One War begets another. War must be the last option and even then every conceivable effort must be at hand to stop it !”

Sadly just two months after Partition, Pakistan Army sent infiltrators into Baramulla area. The Maharaja of Kashmir on 26th of October, 1947 signed the Instrument of Accession to the Union of India. Indian Army had to be shifted urgently to Srinagar to defend the territory. A lot of delay was caused by both Lord Mountbatten, the Governor General of India and by the PMO’s Office in giving a green signal. General Cariappa managed to shift the Indian Army by air in nick of the moment. The Indian Army successfully repelled the attack and drove back the infiltrators. Both General Cariappa and General Thimayya were ready to take back the Pak Occupied portions of Kashmir, but unfortunately Prime Minister Nehru declared ceasefire without consulting his Commanders. During the battle with these razakars, the Indian Army managed to kill 900 of them and this came to be known as ‘Operation Kipper.’ At this very moment, General  Cariappa was transferred to New Delhi away from the theatre of action !

Lack of Political Will

Independent India’s first Commander in Chief (C-in-C) was General Sir Robert Lockhart. When Lockhart sent Nehru a plan for modernisation of the Indian Army, Nehru’s response was lukewarm. He even remarked that the Army as an institution could be dispensed off and that the Police Force would more than suffice in any emergency! Adding insult to injury, Nehru issued an order to reduce the Army strength from 2,80,000 to 1,50,000! By January 1, 1949 Nehru declared a ceasefire — if not for this abrupt cessation to fighting, General Cariappa was confident of taking back all the lost territories. In spite of this, General Cariappa conducted clandestine covert operations in Ladakh and thus secured it for India. Lockhart was succeeded by Gen. Roy Bucher as the Second C-in-C of the Indian Army.

[To be concluded tomorrow]

ONE COMMENT ON THIS POST To “Lest we forget their sacrifice-2 : The story of Field Marshal K.M. Cariappa”