Home » Feature Articles » Lest we forget their sacrifice-1 : The story of Field Marshal K.M. Cariappa 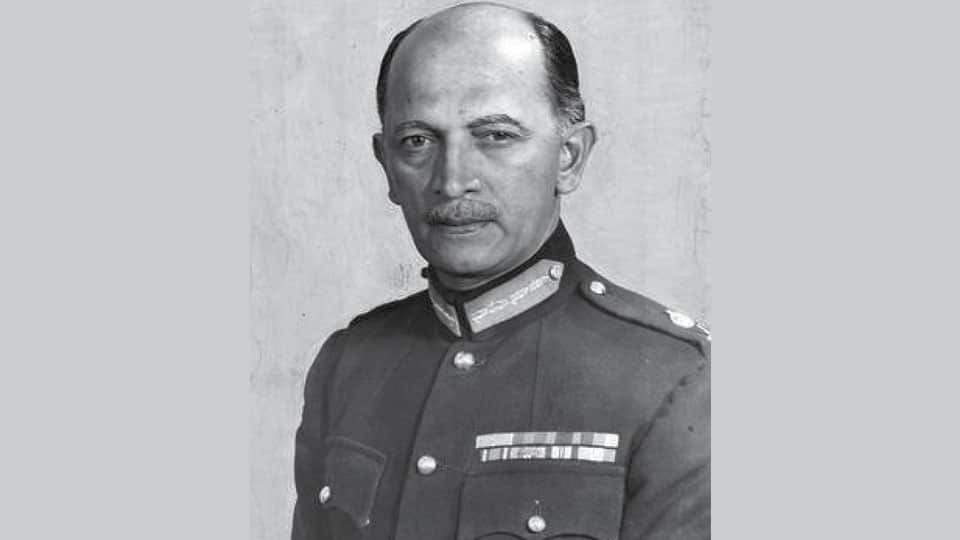 Lest we forget their sacrifice-1 : The story of Field Marshal K.M. Cariappa

A Leader, Commander, Benevolent Father to his children and a guiding beacon that led an entire nation and her armed forces — Field Marshal Kodandera Madappa Cariappa was the first Indian Commander-in-Chief of the Army. He was to his men the epitome of gentlemanly conduct and selflessness. His ideals still hold sway in the Indian Military Establishment. His greatest gift to the Indian People, probably was a fighting force that was no less compared to any other in the world and yet had the commendable restraint that prevented the Army from ever meddling directly in the political machinations of the country. This delineation lent a sense of integrity and unique purpose to the Military Establishment that has held it in good stead all these years. The credit for this must go to K.M. Cariappa. May 15, 2019 was his 26th Death Anniversary and it would indeed be a good time for a look back on his life and events…

On the 28th of January, 1899 the residents of Shanivarasanthe in Coorg heard a shot fired from the revenue quarters heralding the birth of a baby boy. The boy’s parents were Kodandera Madappa and Ammayya. He was the second among six children and was fondly called ‘Chimma.’ Madappa was a Sub-divisional Magistrate in Shanivarasanthe at that time. Chimma would one day command the Indian Army in Independent India and play definitive roles in WW-II and wars with Pakistan soon after Independence. He nurtured an Army that has stood the test of time. Till the very end of his life, he dedicated to the Army, a spirit of camaraderie and patriotism which remains legendary to this day.

Field Marshal K. M. Cariappa stuck to one particular daily habit — he would get up every morning, finish his ablutions and before his breakfast, walk up to the fire place by his bed side to render his salute to three things lined up there — the two photographs of his mother and father and a small silver statue of the unknown Indian Soldier! Like a true gentleman he sat for breakfast wearing a full suit, often alone.

K.M. Cariappa had his schooling at Madikeri. His English teachers C. Rensford and W.H. Whiteworth made quite an impression on the young Cariappa and imbibed British values in him. He was fond of playing Cricket and Hockey. In 1918, he went to Presidency College at Madras for his graduate studies. On his return to Coorg, there was an ongoing recruitment for the post of “Commissioned Officers” for the Army. Chief Commissioner Cobb was impressed by K.M. Cariappa and selected him over others.

Cariappa joined ‘Daley Cadet College’ on June 1, 1918. His first posting was in the 88th Carnatic Infantry (2nd Battalion) wherefrom he was transferred to 125 Napier Rifles. This regiment was stationed at Mesopotamia (Iraq) for two years. At the end of two years, he was transferred to ‘Prince of Wales’ 37th Dogra Regiment, which was at that time stationed in Afghanistan. During these postings, Cariappa learnt and incorporated into his men the tricks of guerrilla warfare — a move that caught the attention of his British superiors which eventually resulted in his promotion to the post of Quartermaster. He is believed  to have got the nick-name ‘Kipper’ around this time. This nickname was later adopted by Nehru and Indira Gandhi as well!

As a representative of the British Indian Army, K.M. Cariappa had the opportunity to visit and observe many other armies. While in Japan, he sadly lost his mother in India. Upon his return, his reputation as an able officer had begun to make rounds in the higher echelons of the British administration. He was entrusted with the onerous task of escorting Viceroy Lord Irwin to Madikeri on an official visit. Cariappa was just 24 years old ! By 1927, Cariappa was a Captain in the Army. Cariappa’s coaching at Royal United Services Institute in 1932 and his time at Small Arms School (SAS) and Royal School of Artillery (RSA) prepared him well enough to clear the Quetta Staff College Entrance Examination. In 1936, he was appointed as Staff Captain and in 1938 he was promoted to the rank of Major.

On his 37th birthday, he was sent back to India and was stationed at Hyderabad. In the same year, he got married to Muthu in a traditional Coorgi style wedding. He had his first child, a boy (Nanda Cariappa) in January of 1938. His daughter Nalini Cariappa was born in February of 1943. His tedious and hectic schedule and the constant transfers across the continent eventually took a toll on their marital life. The couple separated in 1946. After the separation, Cariappa took both his children (aged eight and three years) under his wings. He was ably assisted in this effort by his sister. A sudden transfer for Cariappa’s sister’s husband to Andaman & Nicobar Islands meant that he could no longer take care of both children by himself. He decided to send his daughter with his sister and retained his son with himself. In 1954, Cariappa learnt of the sad demise of his former wife Muthu in a car accident.

At the start of Second World War (1939), K.M. Cariappa was stationed in Iraq under General Slim in the Tenth Indian Division. By the end of 1939, Slim recommended Cariappa for the prestigious ‘Mentioned in Dispatches’ distinction. The next year (1940) saw Cariappa taking command of the Indian Divisions in Iran & Syria. In the succeeding decade, Cariappa became the first in Indian history to be offered the post of a ‘Commander.’ He took command of the ‘Rajput Machine Gun Battalion’ as acting Lieutenant Colonel in 1942. In 1943, the Japanese army occupied Burma and Andaman & Nicobar Islands. K.M. Cariappa was transferred to Calcutta (Eastern Command) to take back territories of Burma and Andaman & Nicobar Islands. His valour and able leadership at the height of Second World War earned him the ‘Order of the British Empire’ in 1944. Soon after World War II, he was promoted to the post of Brigadier.