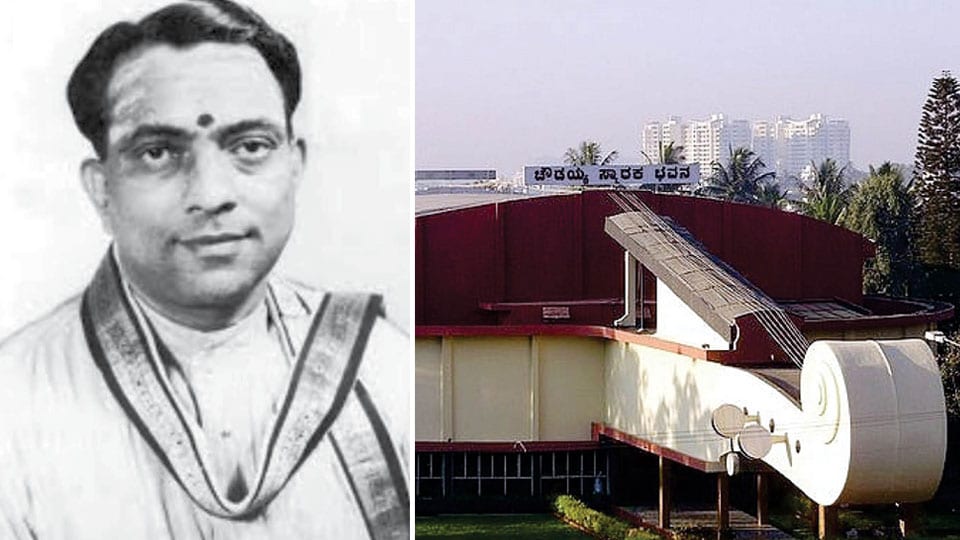 A similar episode concerned a rich Chettiar businessman in Mysore by the name of Sahukar Channaiah. When Channaiah suffered substantial losses in his later years, he went into depression and ill health. Bidaram Krishnappa (Chowdaiah’s Guru) sang for Sahukar Channaiah for a couple of weeks, apparently hastening his convalescence. Channaiah was magnanimous and wished to repay Krishnappa in some form. Krishnappa suggested that Channaiah donate some amount towards the girders for a temple construction which was ongoing.

Chowdaiah accompanied many a titan on stage over five decades. There is an interesting narrative as to how Chowdaiah and Ariyakudi Ramanuja Iyengar came together. Ramanuja Iyengar was an eminent Karnatak vocalist and had his concert scheduled at Madras. His violinist could not turn up for some reason and this left the organisers in a quandary. Incidentally, Chowdaiah was in Madras on that day. They approached him and begged him to fill in the vacancy. He consented. Ariyakudi was none too pleased but agreed begrudgingly. Due to inevitable reasons, Chowdaiah was delayed in arriving at the venue and upon entering the room found Ariyakudi already in concert. Chowdaiah felt slighted, but nonetheless joined Ariyakudi on stage. The evening special “Shankarabharana” was among Ariyakudi’s favourites and he was superb. Not to be outdone, Chowdaiah rose to the occasion and gave a spectacular performance. This established their adversarial relationship.

A fortnight later, they were on stage together again and this time Ariyakudi chose a keerthana by Thyagaraja titled ‘Nidhichalasukhama.’ This keerthana requires one to start allowing for a gap of one moment — a technicality that is traditionally adhered to. Ariyakudi started with a gap of one-and-a-half moment, instead of one. His rendition was none the less superlative. The idea was that Chowdaiah could not match this impromptu improvisation. Chowdaiah started his rendition with a rather disdainful smile and not only equalled the technicality in metric terms but gave such a performance that he received a standing ovation!

After this, Chowdaiah looked at Ariyakudi and remarked “Iyengar Sir, please do not assume that we are unaware of these technical wizardries. We are not only aware of them, but we are equally adept at using them to advantage. But you see, these gimmickries are seldom done and tradition requires being adhered to.” Ariyakudi was taken aback. This incident, surprisingly enough did not engender long-term enmity, but instead fostered a warm and affectionate relationship that saw the duo appear together on innumerable occasions over the next four decades — to the point that they were deemed inseparable!

His legacy continued in the long list of great Violinists who came under his tutelage. To name a few — R. K. Venkatarama Sastry, V. Sethuram, Palghat S.R. Mani, V. Ramaratnam, K. S. Alagiriswamy, H.R. Seetaram Sastry and H. S. Anasuya. Chowdaiah is credited with at least seventeen keerthanas and five tillana compositions. He was a regular musician at Akashvani Studios in Mysore. Along with Veena Doreswamy Iyengar, he had the rare distinction of playing music at Chief Minister S. Nijalingappa’s family wedding function!

Chowdaiah founded the Ayyanar School of Music in Mysore at Prasanna Seetha Rama Mandira. He is popularly remembered as ‘Pitilu (fiddle) Chowdaiah’ to this day. The Concert Hall in Malleswaram, Bengaluru, is named in his memory. He passed away on 19th January, 1972 at the age of 72. His affable, endearing persona still lingers on. His music remains timeless.