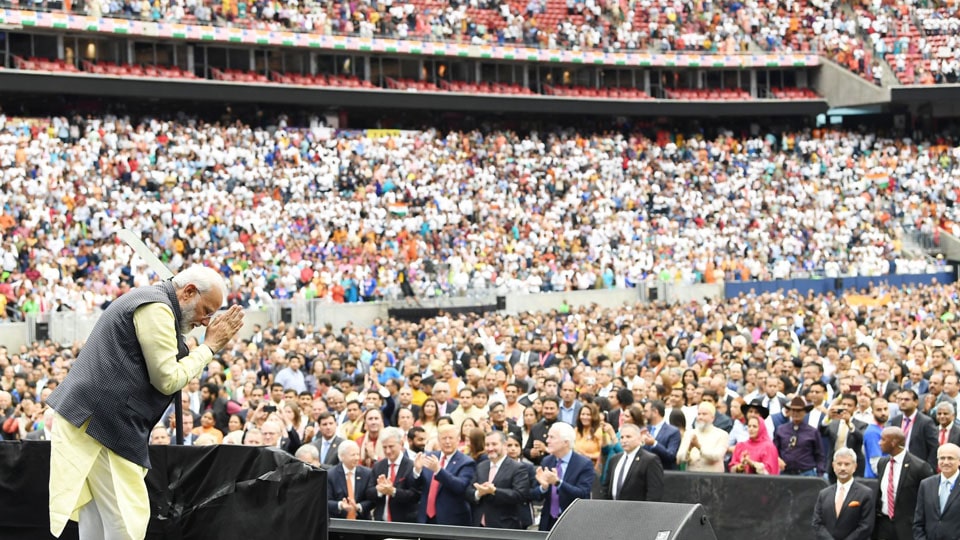 What spectacle! What drama! What breathtaking orchestration! Narendra Modi’s pulling power was in evidence all through his triumphant tour of the US and especially his thundering performance at Houston with the US President himself playing second fiddle.  Such was the impression he made that influential newspapers like New York Times and Wall Street Journal featured him with big pictures as the lead story on the front page; usually India gets only an inside mention in such papers.

Not that this was the first time Narendra Modi received such adulation on foreign soil.  Madison Square Garden in the heart of Manhattan saw a massive gathering applauding him. In Silicon Valley, ditto.  In London’s Wembley Stadium, the British Prime Minister joined the cheering mass of Indians to sing Modi’s praises.  In Australia, too, there was a gathering such as that country had never seen in praise of a foreign political leader.

There is no doubt that Modi has become the most celebrated political figure in the world. Russia’s Vladimir Putin and China’s Xi Jinping preside over more powerful countries. India is nowhere near the US-Russia-China camp in terms of economic or nuclear muscle. Yet, Putin and Xi have never been felicitated the way Modi has been on another country’s soil. Not even when China has a larger overseas diaspora than India’s.

Obviously they were not interested. Just as obviously, Modi is interested.  Hence, the spectacle of India developing special skills without hesitation.  An elaborate system has been put in place to mobilise forces across the world for the Houston kind of dramaturgy.  The best of brains are marshalled and unlimited funding made available.

READ ALSO  And now, be ready to get smashed

For the Madison Square Garden show (2014) and the Silicon Valley show (2015), meticulous arrangements were made by skilful organisers months in advance.  Apparently, the man in charge was Ram Madhav, who moved from RSS to BJP and became Prime Minister Modi’s confidante and Ambassador-at-large. His first step was to sideline local Indian Associations that were steeped in rivalries and ego clashes.  In Silicon Valley, for example, he persuaded local activists to come under one umbrella: a newly-formed Indo-American Community of West Coast with a website of its own, Pmmodiinca.org.  For a similar show in Sydney,  he set up the Indian Australian Community Foundation.  With petty infighting thus pushed aside, and propaganda material liberally provided (face masks, balloons, T-shirts, placards), Ram Madhav was able to present a grand show with all Indians apparently participating. The New York Times started its report in 2014 with words that reflected all-round enthusiasm: “They wore his face on their chests, waved it as posters, chanted his name and quoted his slogans, 19,000 fans drawn to a single star.”

In Texas last week, the Ram Madhav imprint was everywhere. The show was organised by the Texas India Forum backed by 650 diaspora groups as partners. It was grander and more glittering than anything before. (An unexpected anti-climax was the spectacle of a middle-aged, apparently Gujarati woman, at the post-speech community reception, unashamedly stealing dhoklas from the table.  She saw the camera focussing on her, talked about it to someone nearby, then put some more dhoklas into her bag. There are things in this world that neither the Ram Madhavs among us nor the magic of Modi can stop.)

When the hurly burly’s done and the battle is never lost, always won, a question remains: How important is showmanship in governance? Although Xi never organised mass demonstrations to underline his importance, he managed to make himself lifetime President of his country. The West detests Putin but is unable to do anything against him because of his power which he gathers and exercises without organising shows of mass popularity.  Evidently a leader does not need showmanship to exercise power.  Showmanship takes over when there is an inner yearning for approval.

To some leaders, showmanship is important.  P.T. Barnum is a celebrated name in the history of showmanship. In 1835, he purchased a decrepit Negro slave and put her up as an exhibit claiming that she was 161 years old.  He made good money and went on to found the Ringling Brothers — Barnum and Bailey Circus, which in turn became known as The Greatest Show on Earth.  Three years ago, an American academic recalled this and wrote: “Today the country is gripped in a populist fervour, just as it was in Barnum’s time.  Advertising saturates all parts of our lives.  And, of course, there is the country’s new President. Barnum’s showmanship pulses through every fibre of Donald Trump’s political style.”

4 COMMENTS ON THIS POST To “Secret of success: Showmanship”