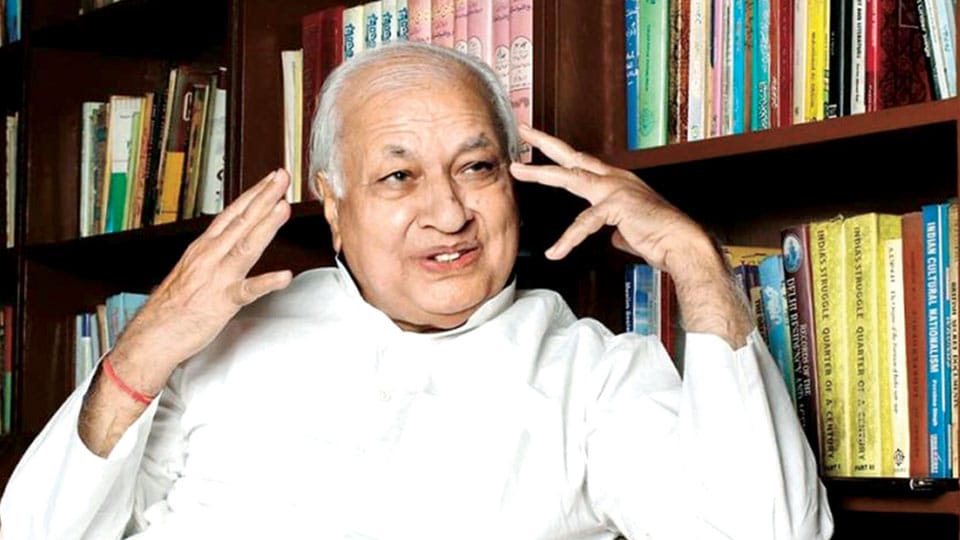 Columnist thinks he is God: Governor

With apologies to readers, I would like to share this week’s column with Sri Arif Mohammed Khan, Governor of Kerala. He disapproved of some critical remarks I made about him and wrote:

I am writing this letter not to rebut what you have written in your piece in The New Indian Express today, that is on 27.12.2020.  I feel I am an avid reader of books and newspapers but I have rarely come across a piece which makes one say: “But for the grace of God, here is a piece written by God himself.”

I would like to thank you for spending so much time and energy to read my heart and intentions and judging me as the “most frustrated politician.”  From your piece it appears that you are more privy to my convictions than I am, and have chosen to articulate them by saying that: “He has been made Governor when his own conviction is that he can serve the country best by being a power-wielding Minister.”

You further say: “He is taking out his frustration on the elected Government in Kerala.” In your judgement you sound like God who is all-knowing about innermost feelings and has the right to judge, and not like a veteran writer who is supposed to give his opinions based on available facts and not distort facts to project this biases and prejudices.

First, you hold my ‘frustration’ responsible for the “ugly situation” and in the next para you allege that what I have done is to prove my loyalty to Modi Government which sees farmers as enemies. Now surely both contentions cannot be true at the same time.

About my alleged conviction to become a power-wielding Minister, I would like to bring to your notice the following facts which are public knowledge but you have chosen to ignore.

That I became a junior Minister in UP Government in June 1977, when I had just completed 25 years, but few months later when I developed differences with the Chief Minister on handling of law and order situation, I immediately resigned from the Government.  So much for my love of power at that young age.

That in 1985, as MoS in the Ministry of Home Affairs I had defended the Supreme Court verdict on Shah Bano in Lok Sabha. But in 1986, when the then Prime Minister Mr. Rajiv Gandhi developed cold feet and succumbed to the divisive and communal demand of Muslim Personal Law Board, I resigned from the Government on the day the Bill to reverse the Supreme Court judgement was introduced in Parliament.  Before his volte face, the Prime Minister had transferred me to Power Department with independent charge, possibly to mollify me. In 1986, when I resigned, the Prime Minister had a Parliamentary majority of 400-plus members and no one at that time had even remotely entertained the idea that the Government of Mr. Rajiv Gandhi may face any threat in near future.  And for your information in 1986, I was just 35- years-old.

READ ALSO  The State as a conspiracy ?

In 1990, after Chandrashekhar Ji, for whom I had great feeling of respect and fondness, became Prime Minister.  He was kind enough to invite me to join his Government but I politely refused.

I do not wish to give you similar other instances but it would be appropriate to mention that in September 2014, I received a communication from BJP leadership about taking some responsibility which again I declined politely due to personal reasons.

In past I had to sever my political links, but every time this happened, I gave up some position of power and did not do it to get into some new powerful position.

But speaking psychologically, human beings are prone to see others in the mirror of their own dispositions and inclinations and therefore you have every right to view me accordingly.

You have further insinuated that “ugly situation” created by me “has been saved from becoming a public scandal only by Chief Minister Pinarayi Vijayan’s diplomatic handling of it.”

I do not know what are you referring to. It is true that on 22.12.2020, he expressed his regrets on my seeking clarifications but on 24.12.2020, while proposing to hold emergent session on 31.12.2020, he has detailed out the grounds to justify an emergency Session, as I had suggested in my queries to the earlier proposal which had casually mentioned “to discuss some important issues.” So while the validity of the queries that I raised became clear to the Chief Minister and Ministers, you have decided to ignore them in your article.

Further you have asserted that “the State Government wanted to call a special session of the legislature to express support to the ongoing farmers’ agitation.”

For your kind information, there is no mention of special Session in the Rule Book.  Yes, the Book says that a Session can be summoned on a short notice or emergently.  I have already made it clear that as far as the regular session is concerned, which requires 15 days notice, the Governor has no discretion and since I have assumed office, I have always approved their proposals to summon sessions without any delay.

READ ALSO  When the best among us falter

But legally speaking when a proviso is invoked to summon an emergency session then it must be accompanied by a detailed note containing grounds to show the nature of emergency.  The proposal of 21.12.2020, mentioned no grounds; it merely said: “to discuss some important issues.” I hope you remember how severely eminent Jurists had criticised the then President of India, Sri Fakhruddin Ali Ahmad, for signing all documents during emergency without applying his mind.  It was then that the term “Rubber Stamp” was frequently used.

You may differ with me but I am convinced that whenever the Government decides to depart from normal rules and takes recourse to emergency provisions, I shall not give my approval without applying my mind and satisfying myself that genuine grounds exist which justify invocation of emergency rules.  In this case I have done what my understanding of law dictated me to do and shall do the same in future in the eventuality of Government not spelling out the grounds while invoking emergency provisions.

For your kind information my Government has already agreed to this proposition and the fresh proposal to summon Assembly has come with an exhaustive note.  I may or may not agree with their reasoning but they have fulfilled the requirement.

I do not wish to comment on the rest of your article which is full of baseless charges like “Modi Government seeing farmers as enemies.”  That is your opinion and opinion is free but the facts are sacred.  And the fact is that by elimination of middlemen, farmers have already started benefiting and hopefully will substantially increase their income in few years when the new laws come into full play.

You are a veteran journalist and writer, I feel you have every right to scrutinise my views and actions, but you or for that matter anybody else has no right to attribute motives or scrutinise what you presume are my intentions.  I am not asking The New Indian Express to publish it, but I have a duty to put the record straight by giving you fact which you may not be aware of.

To this I replied:

Thank you for your note.  I am too mundane a journalist to have any pretensions of being God.  Also, I have no allegiance to any party, any ideology, any religion.  My only allegiance is to my profession.  I will happily publish your letter so that your views reach the public as freely as mine do.  I trust God won’t mind that…