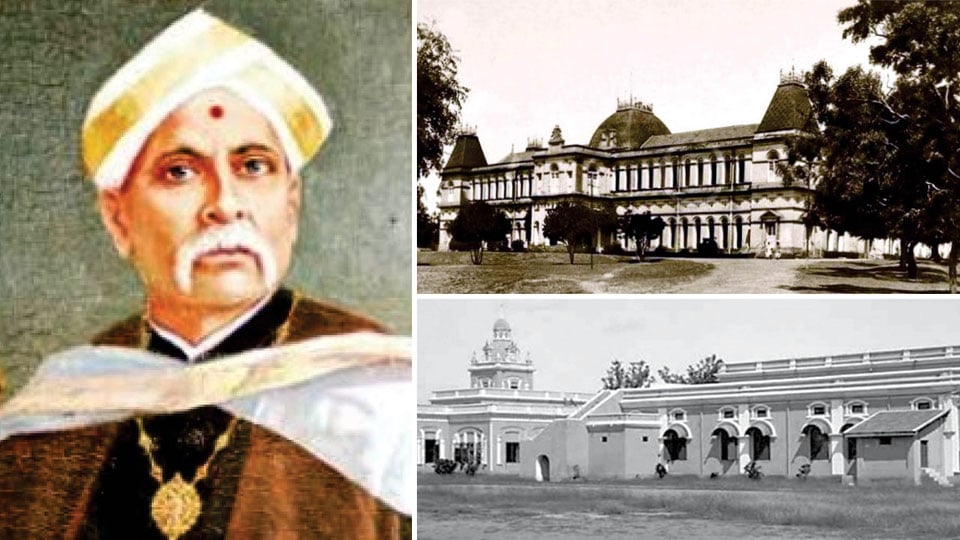 A Judge, a teacher, an astute administrator and a true far-sighted visionary  H. V.  Nanjundaiah laid the foundation for the first native University among the Princely States of Pre-Independent India. His painstaking and meticulous devotion to this enterprise left behind a lasting legacy that hundreds of scholars, writers, litterateurs and intellectuals today refer to as their beloved Alma Mater — University of Mysore. This is but a small glimpse into such a man’s life.  Now read on…

Hebbalalu Velpanuru Nanjundaiah was born on 13th October, 1860 to Subbaiah and Annapurnamma. He had his preliminary education at Wesleyan Mission High School, Mysore and later at Madras Christian College. He secured a B. A. degree in 1880. After completing his B. A., he worked briefly as Sub-Registrar at Kollegal and as a clerk at the Accountant General’s Office, Madras. He did his Bachelor’s Degree in Law (B. L.) in 1883.

In 1885, H. V. Nanjundaiah became Munsiff at Nanjangud. The same year, he completed his M. A. as well. Following this, he was appointed as Assistant Commissioner at Hassan, Shimoga and eventually at Mysore. In 1892, he became a Sub-Judge at Bangalore Court. The next year, Nanjundaiah completed his Master’s Degree in Law (M. L.). He was made a Fellow of the Madras University in 1895. He was appointed as Under-Secretary to the Government of Mysore in 1895. From 1897 onwards, Nanjundaiah would hold many positions such as Deputy Commissioner of Shimoga, Chief Secretary to Mysore State, Chief Judge of Mysore State and Vice-Chancellor of the University of Mysore.  He was fluent in Kannada, Telugu, English and French.

Nanjundaiah married Annapurnamma in 1876. But she passed away during the delivery of their seventh child.Nanjundaiah was 37. He then married Krishnavenamma who was 14 years of age. She bore him three sons and three daughters.

Sir Herbert Hope Risley was a British Ethnographer and member of the Indian Civil Service who conducted extensive studies on the tribes and castes of the Bengal Presidency. Nanjundaiah under Risley’s direction took up the laborious ethnographic survey of the Mysore State from 1904 – 05. In 1904, Nanjundaiah was made President of the Maharani School Administrative Council. During this period he started a widow’s home. He presided over the Educational Chair in the conference held in 1911 by Sir M. Visweswaraiah on ‘Economic Progress’. He was invited to Madras to preside over the Humanities Chair in the ‘Indian Science Congress’ held in 1915. In 1917, Edwin Samuel Montagu came to India to spearhead the Montagu-Chelmsford Reforms. Nanjundaiah’s memorandum to Montagu highlighting the lack of pay parity between Britishers and Indians in the Indian Civil Service was well-received and found mention in the British Parliament.

By 1910, the Princely State of Mysore had three main colleges. These were the Central College at Bangalore (1876), Maharaja College (1890) and Maharani College at Mysore. These were under the administration of the Madras University. The idea for the Mysore State to have its own University took shape in 1913 – 14. The initial steps in this direction were taken by the Maharaja HH Nalwadi Krishna Raja Wadiyar, his mother Kempa Nanjammani Vani Vilasa and Diwan Sir M. Visweswaraiah. Nanjundaiah, who was in charge of the Education Department, spearheaded the practical aspects of this dream into fruition. 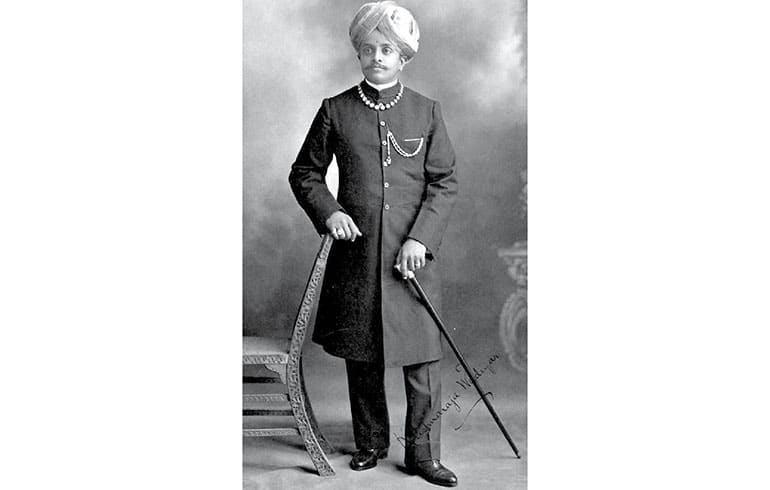 University of Madras was perceived to be ‘distant and detached’ not only in terms of the obvious geographical separation, but also due to the linguistic differences and the prevalent economic challenges in sending poor students all the way to Madras for a University education! These factors fostered in the minds of the rulers of Mysore an indispensable need for a University that was very much our own. Among the Princely States of Pre-Independent India, Mysore was the first to have its own University.

Nanjundaiah played a key role right from the inception of the University. He procured all the syllabi and curricula from Universities across the country. He wrote extensively to National and International Academic experts for their valuable suggestions. He would rely heavily on the inputs of Miller in England. Nanjundaiah drew up a long list of names of illustrious scholars and teachers from Universities and Colleges across the country, who could be invited to chair departments at the nascent University of Mysore. Nanjundaiah was made Chairman of the Committee constituted to oversee the setting up of the University in April, 1916. By July of 1916, he was elevated to the post of Vice-Chancellor of the new University.

The motto of the University was coined as “Na hi Jnanena Sadrusham” (English: Not-hing is equal to Know-ledge). The estimated cost of founding the University was Rs. 15 lakh. The college at Bangalore was dedicated mainly to the Sciences while the colleges at Mysore focussed exclusively on Humanities subjects.

The University of Mysore became autonomous in 1917. The Administrative Hierarchy was thus: Maharaja was the Chancellor, H.V. Nanjundaiah was the Vice-Chancellor, an oversight committee of nine members (six of whom had to be from the Educational field), the University Senate and the Board of Studies for academic matters.

Denham was the first Registrar of the University. B. M. Srikantaiah would succeed Denham for this post. Anderson, Rollo, Macintosh and Metcalfe were some of the Europeans who were invited from Pachiyappa’s College. The above list in itself, bears testament to the exhaustive groundwork done by Nanjundaiah in selecting some of the finest minds of his time to teach in the new University. 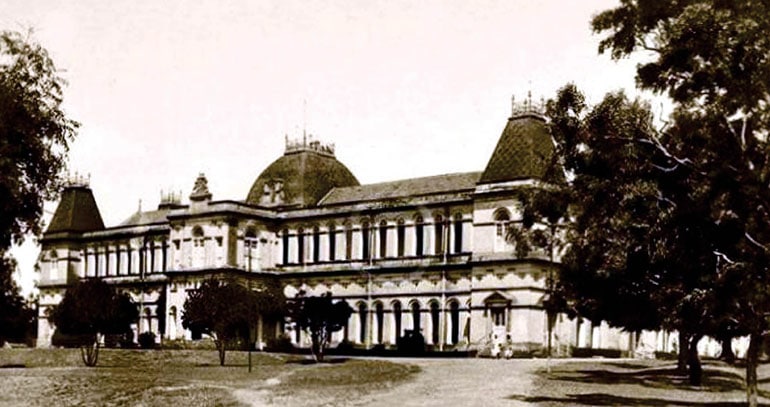 A view of Maharaja’s College, Mysore.

The Maharaja was invited to be the Chancellor of the Banaras University. Subsequently, the Maharaja was made an honorary member of the Royal Colonial Institute. On both these occasions, the Maharaja is believed to have sought special advice from Nanjundaiah before accepting these positions.

Among the writers he loved most were Bacon, Carlyle and Tennyson. He authored many books in his time. “Lekhya Bodhana” (Guide to Writing), “Vyavahara Deepike” (1890) [Guide to Law and Administration] — dedicated to Sri Chamarajendra Wadiyar, “Arthashastra” (1901) [Economics], “Anglo-Indian Empire” (1915) and “Vyavahara Dharmashastra” (1917) — dedicated to Nalwadi Krishna Raja Wadiyar are a few of them.

Delhi Durbar: Nanjundaiah was invited to the Delhi Durbar of 1911. In 1913, the Maharaja conferred upon him the title of ‘Rajamantra Praveena’. In 1914, Viceroy Hardinge bestowed on Nanjundaiah the Companion of the Order of the Indian Empire (C. I. E.).

Though his mother tongue was Telugu, Nanjundaiah was an avid proponent of Kannada language and literature. He was among the pioneers of the Kannada Sahitya Parishat in 1915.

V. Nanjundaiah passed away in May of 1920, while still in office at the age of sixty. He was a true visionary who was blessed with a foresight that was unparalleled. The State of Mysore ought to remember this titan with gratitude for the gifts he bore us so ungrudgingly. A vast bastion of scholars, writers and litterateurs, who call the University of Mysore their proud Alma Mater, owe it in no small measure to a visionary like H. V. Nanjundaiah for their success.