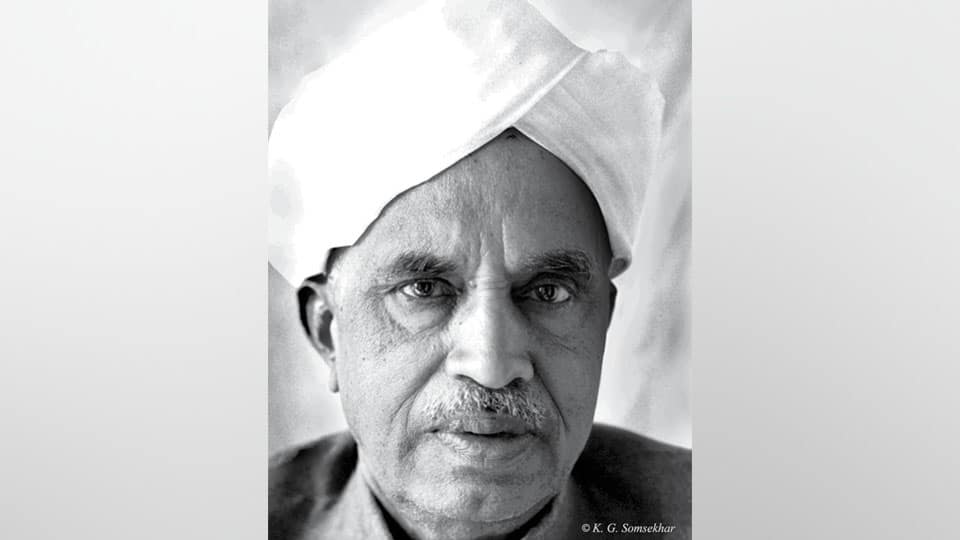 He was the very personification of gentlemanly behaviour, of genteel manners and warm affection. A gifted poet, an accomplished writer, a voracious reader, sharp but well meaning critic, able editor and translator, — V. Seetharamaiah was all of these and more. A generation of students who came under his wings remember him as a literary colossus in his own right — a sentiment shared by readers to this day. D.V. Gundappa described him as Goodness itself. Here is a small tribute to this gentle giant of Kannada literature V. Seetharamaiah. —Ed

Venkataramaiah Seetharamaiah (Vi. Si.) was born in Budhigere village, Devanahalli on 2nd October, 1899 to parents Venkataramaiah and Doddavenkamma. His parents were a devout couple and his father conducted priestly rituals for a living at Bangalore. Till the age of six, Vi. Si. was raised by his grandmother at Devanahalli. Afterwards, he was sent to Bangalore for his schooling. He attended the Municipal and Anglo-Vernacular Schools at Bangalore, where he got a double promotion. T.P. Kailasam, K.V. Iyer and C.S. Venkatachar were his classmates during these school years. He completed his Intermediate in 1916. He would later remember with fondness teachers like Pandit Jayarama Venkatacharya and Doddabele Narayana Sastry from these formative years.

In his later memoirs, he recollects with some nostalgia and fascination, how he was genuinely impressed with the oratorical skills of Right Honourable Srinivas Sastri who happened to visit his school for a lecture. In addition to his impeccable English, his large turban and imposing stature had captured young Vi. Si.’s imagination! Vi. Si. also recollected attending concerts by great musicians like Veena Seshanna, Bidaram Krishnappa and Mysore Vasudevachar and art exhibits by renowned artists like M. Venkatappa and A.V. Varadachar during these years.

After finishing school, many of his seniors routinely set sail to either Madras or Pune for higher education. Sadly, Vi. Si. could afford neither. Fortunately for him, University of Mysore (UoM) had just then come into existence and Mysore was well within his reach. Vi. Si. took the entrance exam at Bangalore. One of the exam valuers J. Tate is rumoured to have remarked thus while correcting Vi. Si.’s English papers:  “Not bad, pull the young fellow’s nose and ask him to write simpler English & keep his sentences shorter.” (This was high praise indeed!). Vi. Si. passed this entrance exam and gained admission to UoM. In fact, he holds the rare distinction of being in the very first batch of the nascent University!

Seetharamaiah completed his Bachelor’s degree (B. A.) at UoM in 1920. His chosen subjects were Political Science, Philosophy and Economics. Upon completion of his Bachelor’s degree, he was awarded ‘Sir Seshadri Gold Medal’ for highest marks in Economics. His teachers in B. A.  included M. Hiriyanna and Sarvepalli Radhakrishnan. Even though he had a keen interest and aptitude for Philosophy and Political Science, Vi. Si. ended up choosing Economics as his main subject for his Master’s degree. The reason for this was two-fold — ‘Economics’ as a subject had a far greater likelihood of earning him a scholarship and secondly, entering the Economics Department would mean coming under the tutelage of Prof. N.S. Subba Rao at Maharaja’s College.

Subba Rao was an alumnus of Cambridge University where he had studied Economics alongside J.M. Keynes under the eminent Economist of his times  Alfred Marshall. Subba Rao’s reputation as a sound economist and able teacher had already spread far and wide. Vi. Si. succeeded in this endeavour and joined M.A. course under Prof. Subba Rao.

Unfortunately, this departure from Philosophy did not go down well with either Hiriyanna or Radhakrishnan. In fact, Radhakrishnan is rumoured to have remarked thus: “Look at this fellow. He has deserted us for Economics. He has prostituted his intellect!” Of course, both Hiriyanna and Radhakrishnan meant well for Vi. Si. but were nonetheless sorry to see a student of his calibre stray away from their field.

During these years at the University, Vi. Si. worked many a job on the side to make ends meet. During his B.A. years, he worked at Mysore Government’s Education Department. During his M.A. years, he worked for a brief period at Sarada Vilas High School as a Kannada teacher. He completed his M.A. in 1922. In his later memoir, he describes Maharaja’s College as “Oxford of Karnataka” and his years there in the words of William Wordsworth:  “Bliss was it in that dawn to be alive. But to be young was very heaven.”

After his University education at Mysore, Vi. Si. set sail for Bombay to study for a L. L. B. degree (Law). During these years, he penned many of his first Kannada poems and works of prose. He used to mail them to A.R. Krishna Shastry, who was then Editor of ‘Prabuddha Karnataka’ at UoM. When Krishna Shastry offered to publish his poems, Vi. Si. shot back a letter prohibiting any such exercise! Shastry was not one to relent easily. He kept prodding Vi. Si. for more of his poems and writings and his permission to publish them. Vi. Si. finally relented. Unbeknownst to him, A. R. Krishna Shastry shortened V. Seetharamaiah to Vi. Si. and published his first poem in ‘Prabuddha Karnataka’. This ‘pen name’ (Vi. Si.) would come to represent the doyen of Kannada poetry for decades to come!