Home » Columns » Abracadabra By K. B. Ganapathy » In India old order is changing, yielding place to new under Modi 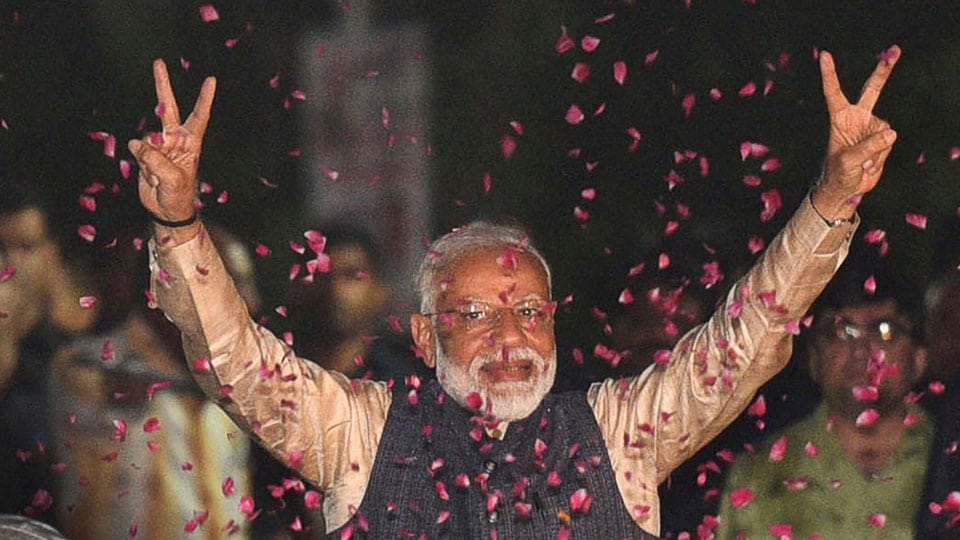 In India old order is changing, yielding place to new under Modi

I am inspired, nay provoked, to write this Abracadabra after reading one of the most popular Weekly columns Point of View by T.J.S. George. A veteran journalist, author and highly regarded political commentator, George is honoured with Padma Bhushan. The title of his article was “All set for the next 20 years.” He was talking about the possibility of BJP Government lasting for another 20 years under Narendra Modi and Amit Shah considering the self-imposed BJP’s official age limit of 75 to hold an Office.

This is how George arrives at his conclusion. He says, “The power so carefully planned and attained cannot be short-lived. It is safe to predict that the present BJP leadership will stay in power for the next 20 years, perhaps longer. Here is the breakdown. Modi will complete his second term in 2024. That year he will be 74 years old and Amit Shah 60. Amit Shah will succeed Modi and win two terms ending in 2034 when he will be 70. He can remain PM for a third term until he is 75, the BJP’s official age limit.”

Surprisingly, George has not taken into consideration the most vital factor in politics — uncertainty. In fact, uncertainty is the only certainty in politics. We have seen it happen all over the world. In India too any number of times during the long and chequered rule by the Congress Party and even later.

Atal Bihari Vajpayee was considered a very tall leader. Pandit Jawaharlal Nehru, it is said, had even prophesied that one day Vajpayee would become the Prime Minister and it happened! But then, what happened thereafter? He could not bring the BJP to power for the second term despite the slogan ‘India Shining.’ The voters found this slogan as fake as that of Rahul Gandhi’s ‘Chowkidar Chor Hai.’ Many changes may take place in the next 20 years and it is possible that BJP might lose because of its reckless pursuit of extreme nationalism. Who knows?

No doubt the present result has surprised and shocked many. The stunning victory of the BJP, George admits, has stunned him no end. A couple of days back, I found a print-out of an article by senior journalist Tavleen Singh that appeared on Twitter lying on my desk. It was its headline that made me interested in reading the article. It said, “No revival of that old order: The idea of India in which there are privileges and not rights is dead.”

Claiming herself as someone born and bred in India’s ruling elite group of privileged Indians, she says, “We controlled everything. Politics, Government, Business, Foreign Policy, the Police, the Military and the Media.” This was possible, she says, because all those belonging to this ‘group of privileged Indians’ were courtiers in the court of the Nehru-Gandhi dynasty since Independence. The dynasty’s ‘Idea of India,’ Socialism and Secularism were all fake. Only Indians who spoke English well, went up in life during this period. All this made the Parliament a private club and the democratic process itself became the dynasty, according to the writer. Being born seven years before Independence, in retrospect, I find much truth in her observation.

READ ALSO  Are you out to build your son’s political career on Ambarish’s grave?: Sumalatha to HDK

An ordinary Indian for the first time was told that the voter has to choose between Kaamdaar and Naamdaar. ‘A working man and a Prince.’ A common man and the Congress. Congress mocked Modi in many ways and made fun of him. Here are some gems. Modi used to hug the Heads of States during his meeting with them and this gesture of his was sarcastically called Hugplomacy. I wonder what we should call Rahul Gandhi’s hug and wink in the Parliament. Remember? Similarly, the GST was called Gabbar Singh Tax. Though demonetisation helped bring out lakhs of crores of black money, the Opposition said it was intended to steal money from the public.

When Modi described himself as the Chowkidar of the country who will protect its wealth and borders, the Opposition brought in the issue of Rafale and called him Chowkidar Chor Hai. If you listen to Rahul Gandhi’s campaign speech, you would hear him use the words Chowkidar Chor Hai any number of times exhibiting bankruptcy of knowledge to speak about other issues. How can a chaiwala become the Prime Minister of the country? It was not just Mani Shankar Aiyar’s problem. It was the problem of the Lutyens’ elite club members. Modi is a Neech, declared an old Congress acolyte of Nehru family. This was the man who on his visit to the Cellular Jail in Andaman, when he was a Minister, got a commemorative tablet, put up in the solitary cell where Veer Savarkar was imprisoned for 13 long years for fighting for the freedom of our country, removed from its place. This is one example of how the ruling elite of Nehru-Gandhi era foreclosed for themselves the name and fame connected with our country’s freedom. According to an English TV channel, there are 464 institutions, buildings, airports and schemes named after Nehru and Gandhis.

Unfortunately, our own political leaders in the Opposition were demeaning their own Prime Minister. Fortunately, voters were not impressed.

According to Tavleen Singh, the past five years had been difficult for India’s good-old ruling elite led by Congress and its allies in the UPA. All those high officials, made-famous writers, editors of English newspapers, high profile TV anchors, inheritors of regional political dynasties, the Leftists and the so-called liberals suddenly discovered their importance diminishing; vanishing with Modi firmly entrenched in his Prime Ministerial Office. Both Hindi and Hinduism got redeemed, from the morass to which it had sunk, following the rise of BJP to glory and power.

The very same Left-liberals and leaders of the dynasty, who today scream that institutions of Democracy (Constitutional Bodies) are in danger under BJP, were conspicuously silent when these very institutions of Democracy like Election Commission, CBI, Judiciary and the very Parliament itself were made puppets in the hands of the Congress Party during 1975-77 Emergency days. Public memory may be short but when people are subjected to deceit and disinformation for too long, there will be someone like Modi to remind the people.

Incidentally, I have received a forwarded WhatsApp message enumerating how the national political scenario will unfold following the election results. It says, be prepared for a huge propaganda about EVMs being faulty and manipulated. Already a mass protest is planned in Mumbai in this regard for today at 5 pm.

Now, like in 2014, let us get ready to read about Lynching and Intolerance. We will soon read about Award-wapsi, activities by Urban Naxalites, anti-Hindi protests in Tamil Nadu, covert plans to discredit Modi and bring in Nitin Gadkari for the PM’s post, making allegations against the RBI, Income Tax (I-T) Department, Enforcement Directorate (ED) and Paramilitary forces and may be a press meet by Supreme Court Judges like in the last year.

All things considered, it is best for the country if our leaders of the Mahagathbandhan, UPA and NDA together work for Sabka Vikas with Sabka Vishwas — Development of all by taking everybody into confidence, both the majority and the minority.

Probably, BJP wants the Hindus to be considered as First among the equals in this Hindu majority country and its policies guided by the spirit of Hindutva. As a corollary we can give the example of a Ministerial Cabinet. Though, all Ministers are equal, the Prime Minister is the First among the equals. We are all brothers, but one is the elder brother.

6 COMMENTS ON THIS POST To “In India old order is changing, yielding place to new under Modi”