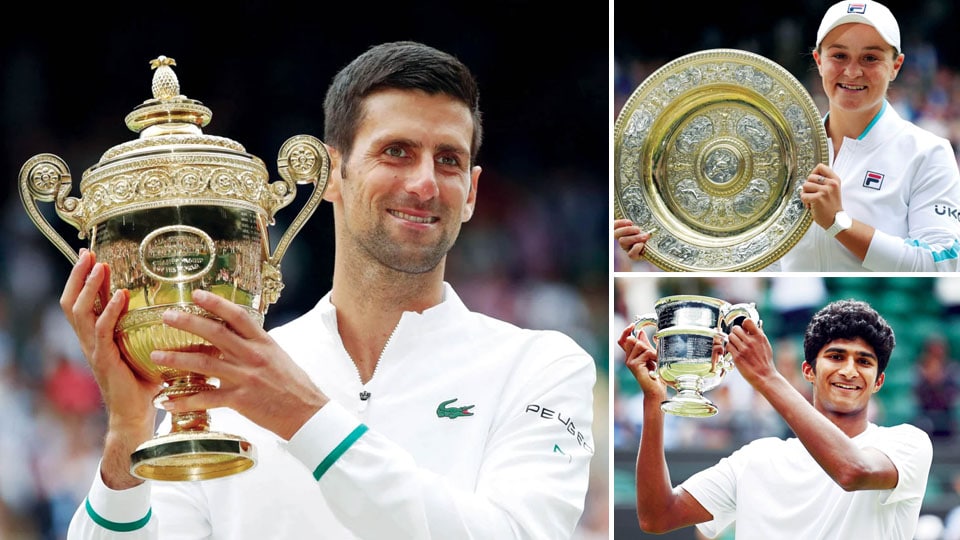 London was agog with sporting activities last week-end. Italy won the European Championship for the 1st time since 1968 in a 3-2 shootout win at Wembley. 17-year-old ‘Indian American’ lifted the 2021 Wimbledon Juniors Trophy. Cool and composed Barty lifted her 1st Wimbledon Title. Invincible Djokovic lifted his 6th Wimbledon and 20th Grand-Slam Title; his 3rd successive at the Wimbledon; well on way to ‘Golden Slam’ at the Flushing Meadows, New York, later in August/September.

In relaxed COVID protocols, 15,000 plus watched the tennis matches live. Millions of TV viewers across the globe enjoyed a great fortnight of exhilarating Tennis and Football. Reportedly, all the Pubs in Italy and England were jam-packed when the football finals was on. That is Magic of Sports. Isn’t it a great feeling.

All was not ‘Hunky Dory’ this time at the Wimbledon. Champions and the budding ones made over from ‘Clay Courts’ of the French Open to ‘Grass Courts’ barely in a gap of a fortnight. London was experiencing mild showers. Courts were lush green. But, for the contestants they were nightmarish; especially the centre court. Roof cover was rolled over off and on. Trapped moisture took time to evaporate. Grass blades were shiny and beautiful — but slippery. Bounce off the grass was unpredictable at times. Players slid and toppled frequently.

It all started with Mannarino on Day 2. Federer hung on providentially committing endless unforced errors while Mannarino was progressing impressively with 7-6 and 6-3. He slid and toppled, straining thigh muscles. Tragically he had to retire in the 4th Set. On the same Day-2, Serena sustained muscular strain in the 34th minute against Sasnovich and had to retire. Later Raducanu followed suit. Even stalwarts like Federer and Djoko slid many times. In a Sporting gesture, however, both admitted over the mike that “It was expected to be slippery at the beginning — but would settle after a few days.” But, the situation continued until the last day.

In lighter vein and good humour I wondered — “Was it Wimbledon or Tumbledon this season??”

Back to the games, in the Juniors Section, it was redeeming to see the 17-year-old unseeded Indian American Samir Banerjee beating fellow American Victor Lilov (17) in straight sets — 7-5, 6-3 in the finals. We all wish Samir a great career ahead.

Ladies lighted up Wimbledon with tremendous skill and power plays. Stalwarts Barty, Kerber, Pliskova, Sabalenka and youngsters Boulter, Gauff, Jabeur played highly competitive tennis. Two matches that interested me most were Boulter Vs Sabalenka (6-4, 3-6, 3-6) and Sabalenka Vs Jabeur (6-4, 6-3). Both were power-packed encounters. Surprisingly, ‘Laid Back’ Pliskova edged out gutsy and gusty Sabalenka in the Semis (5-7, 6-4, 6-4). In the other, both Kerber (33) and Barty (25) played composed and tactful games — but Barty won crucial points to win the 6-3, 7-6 Semis.

In the Finals, Pliskova looked like one on a ‘Picnic’. Her body language and approach looked tentative/ casual at such a huge moment. She suddenly sprung back to take the 2nd set in a ‘Tie Break’ 7-4; but lost momentum in the 3rd set in a 6-3, 6-7, 6-3. Thank you Ladies for lovely entertainment over the fortnight.

In the men’s section we saw several untoward happenings. Exit of Mannarino on retirement. Tsitsipas exiting on Day 1. Medvedev’s exit on Day 2 etc. But, Federer approaching 40 was extremely lucky to go past Gasquet and Norrie especially. Eventually, 14th seeded young Hurkacz; 24 years of age; from Poland defeated him in the Quarters; straight sets; 6-3, 7-6, 6-0; the young lad who admitted on mike having grown emulating Federer. He was ecstatic. In the Semis, he was overpowered by the Italian Berrettini 6-3, 6-0, 6-7, 6-4.

The other Semis, young Canadian Shapovalov, 22 years old, took the wind out of the stalwart Djokovic. Card reading 7-6, 7-5, 7-5 needs to be read in context of 19 points the Canadian won. But for his impetuousness at times, he would have shocked Djoko. This belligerent youngster surely will reach great heights in times to come.

The 34-year-old Novak Djokovic is more of a Mathematician/ Doctor/ Scientist. In the first set, he uses his Stethoscope to study opponent’s lungs and pulse. Studies Pathology of the court. Doesn’t waste more than 60% of his tactics and power in the 1st set. He puts his foot on the accelerator from 2nd set onwards. From thereon, “He Floats Like a Butterfly and Stings Like a Bee”. That is “Novak, the Serb Superman” for the world. It takes courage and conviction to say over the mike “I believe that I am the Best currently”.

In the finals, the Italian Betterrinni seemed nervous. In the first two sets, he had chopped into the net 21 times; all unforced errors. His drops were weak. It is not that Djoko had a free run. He struggled too on suspect court conditions — conceding the 1st set and ‘Steam Rolling’ the Italian in the next three to register 6-7, 6-4, 6-4, 6-3. If he does the Golden Slam, he will be first after Rod Laver; who did it in 1969. Best to him and all the budding Champions at the Flushing Meadows.