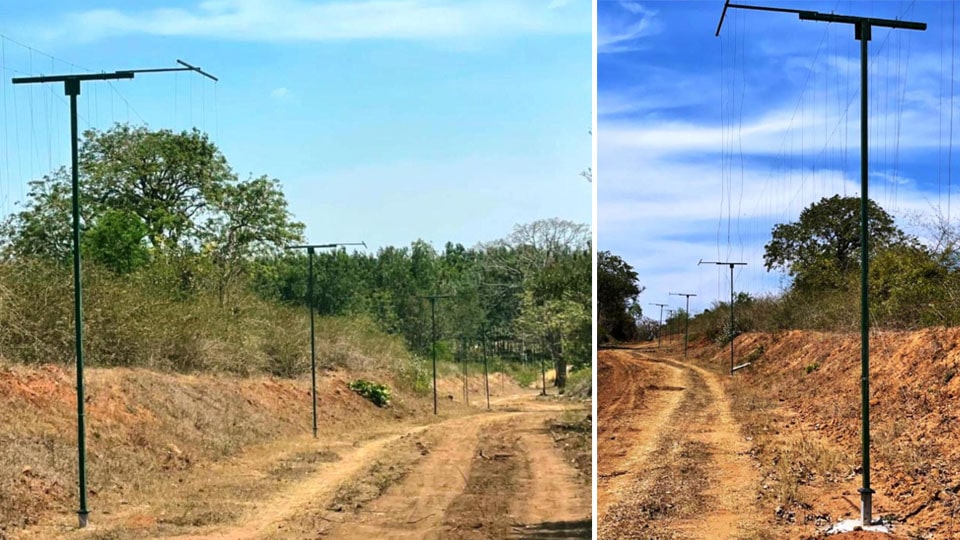 After trenches, railway line barricades, hanging solar fence and other methods failed to keep elephants and other wild animals from entering human habitat and destroying crops and properties, double tentacle solar fence (solar-powered energiser connected to the fence) is being installed at village borders of Nagarahole National Park to keep wild animals at bay.

Nagarahole Reserve Forest is spread over 843 square kilometres and villages bordering the reserve forest are raided by wild animals such as leopards, tigers and elephants, which enter the villages in search of food and water. In the process, the wild animals sometimes kill human beings and livestock and elephants not only destroy crops but also destroy properties causing huge loss to villagers. This also used to give rise to man-animal conflicts.

Though elephant trenches was successful in keeping wild elephants at bay initially, sub-standard works taken up while digging trenches and also elephants filling up the trenches with mud and then crossing over the other side had become a headache to the Forest Department. Hence, along with Railway line barricades, installation of solar fences too was taken up and wild elephants crossing over to the other side at these places has been controlled, say Forest Department officials. In a bid to control wild elephants from entering human habitat in forest borders, the Union Government came forward for erecting Railway barricades seven years ago. Now, the Government has decided to install 102 km long solar fences at Nagarahole Reserve Forest out of which installation of solar fences has been completed for 74 kms.

Solar fences to Railway barricades have been installed in Metikuppe, Veeranahosahalli and Antharasanthe Ranges in Nagarahole Reserve Forest. In the same way, installations has been completed at Hunsur, Kallahalli, Nagarahole and Anechowkur range limits.

In a first at Uttarakhand, ‘Tentacle Solar Fencing’ has been installed in Gaindakhali village in Haldwani forest division in the vicinity of Nandhaur Wildlife Sanctuary to mainly prevent human-animal conflicts.

This fencing is different from the regular solar fencing. It is designed like barbed wires on 4-5 feet iron poles supported by concrete on the floor, tentacle solar fencing is hanged from 15-feet pole at least two to 3-feet above the ground. The fence electrified by solar panels renders a 12-volt non-lethal low intensity shock to animals trying to venture or cross into human populace.

Officials of Uttarakhand Forest Department had said that the tentacle fencing cuts the cost to half and is 100 percent effective and damage-proof in comparison to conventional fencing. We started working to find a way for the co-existence of humans with wild animals and human beings share the planet with wild animals, they added.

At the three forest ranges in Nagarahole, solar fences are installed to Railway barricades, mainly to prevent elephants raiding villages in forest borders.

In recent years, man-wild animal conflicts have drastically come down in Nagarahole National Park limits. If the installation of Railway line barricades is completed fully, it would be very beneficial to farmers in forest borders.

Along with solar fencing, if there are other effective technologies, the same would be implemented to prevent wild animals from entering human habitat, Forest officials said.