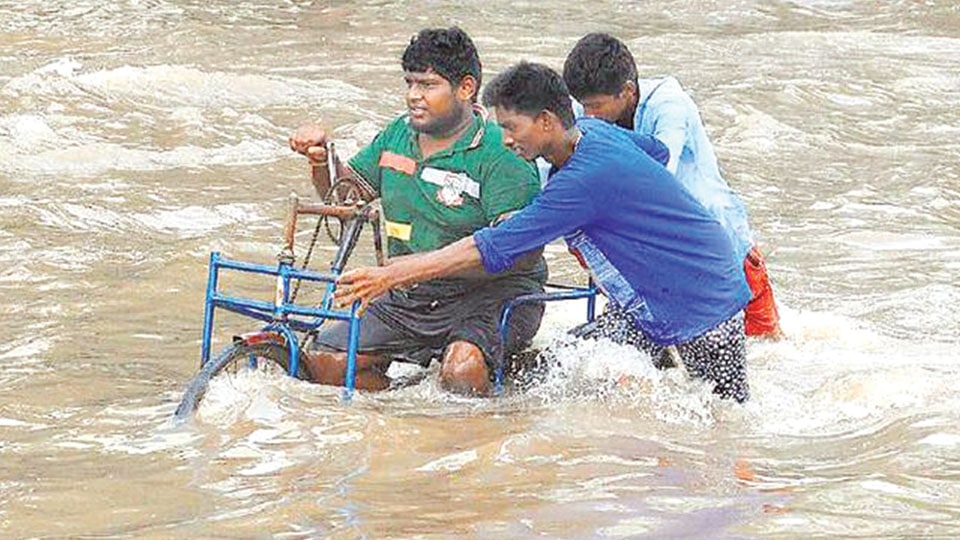 Helping People with Disability during Disaster

Interaction with officials in the Government and other establishments revealed that there is little or no awareness of the needs and difficulties faced by Persons with Disabilities (PwDs) during disasters. PwDs have always been found to be the most affected during disasters like tsunami, building fire, earthquake, flood and recent pandemic.

A study in the selected public spaces reveals lack of amenities to make their life easier with accessibility.  This vulnerable community experiences helplessness to access the emergency facilities like ramps, lifts, wheelchairs, telephones, door latches, toilets and its accessories during disasters. Instances of negligence and discrimination by the establishments have led to their isolation and poor healthcare leading to increased risk.

Disasters have caused injuries, deaths and increased impairment to the persons with disabilities due to improper planning and implementation of schemes and projects. The experiences show that the recent pandemic pushed them to suffer even more severely as a result of series of lockdowns and resultant loss of earning.

Even the public on the street were unwilling to extend support to disabled persons to cross the roads due to the fear of the virus. We saw PwDs struggling in the same queue alongside others in relief shelters for ration and medicines.

Karnataka has 13.24 lakh persons with different disabilities which constitutes 2.17 percent of the total population of the State. Among the persons with disabilities in the State, 54.86 percent are male and 45.14 percent are female. Past studies show that PwDs have two to four times more mortality rate than the general public during the disaster. Generally, there is neither representation of members from PwDs in the Disaster Management Committees, nor the authorities pay attention to include them in planning.

PwDs include those who have long-term physical, mental, intellectual or sensory impairments which in interaction with various barriers may hinder their full and effective participation in society on an equal basis with others. This includes aged persons since the aging process not only deteriorates the existing health status but also aggravates the disabilities.

Situation of a market in Mysuru

The field survey in one of the heritage markets with palatial look covering an area of 3.2 acres in the heart of Mysuru city, which attracts thousands of people daily for vegetables, fruits and traditional items, is fraught with barriers, obstacles and inaccessibility. In the event of fire or stampede, PwDs are bound to get trapped inside the market complex. The entire market area did not have a ramp or barrier-free exit. Narrow lanes inside the market with encroached passage have restricted the movement of persons with disabilities with congested circulation area during peak hours.  Over 90 percent of respondents expressed that the PwDs visiting the market face difficulties in movement. Public spaces like markets should be made accessible for PwDs by providing stable, non-slippery walk-ways that are free from obstructions like stone posts, steps and encroachment. Irregular surfaces laid with stone slabs at different levels cause bumpy rides for wheelchair users and should be replaced by even surfaces with ramps.

Tactile guiding blocks indicate a correct path/ route to follow for a person with visual impairment. Tactile ground surface indicators shall be installed at an entrance/exit to a ramp, staircase,  pathway and platforms. When it is impractical to provide a lift or a ramp due to shortage of space, a wheelchair stair-lift or platform lift should be considered as a reasonable alternative. Handrails on both the sides shall be provided for stepped path, stairs and ramps.

Section 46 of the Right of Persons with Disabilities Act, 2016 (RPwD Act, 2016) makes it mandatory for all the public and private buildings to make them accessible as per the guidelines issued by the Centre. Section 16 makes it compulsory for all educational institutions to make their buildings provided with facilities accessible to PwD. The persons with disabilities shall have equal protection and safety in situations of risk, armed conflict, humanitarian emergencies and natural disasters.

It is informed that Section 61 of the Disaster Management Act 2005  and Section 3 of the RPwD Act 2016 prohibit all forms of discrimination — be it  based on sex, caste, community, descent or  religion — in any activities related to disaster risk  reduction, disaster relief or humanitarian  assistance to the affected people.

Establishments both from Government and NGOs must plan and implement barrier-free and accessible facilities.  Almost all old buildings need to be modified with the accessible amenities as PwDs have been experiencing difficulties and often are physically hoisted leading to a feeling of loss of dignity. At the same time all new buildings and housing projects planned by private and Government agencies must compulsorily incorporate disability friendly facilities as per NBC 2016.