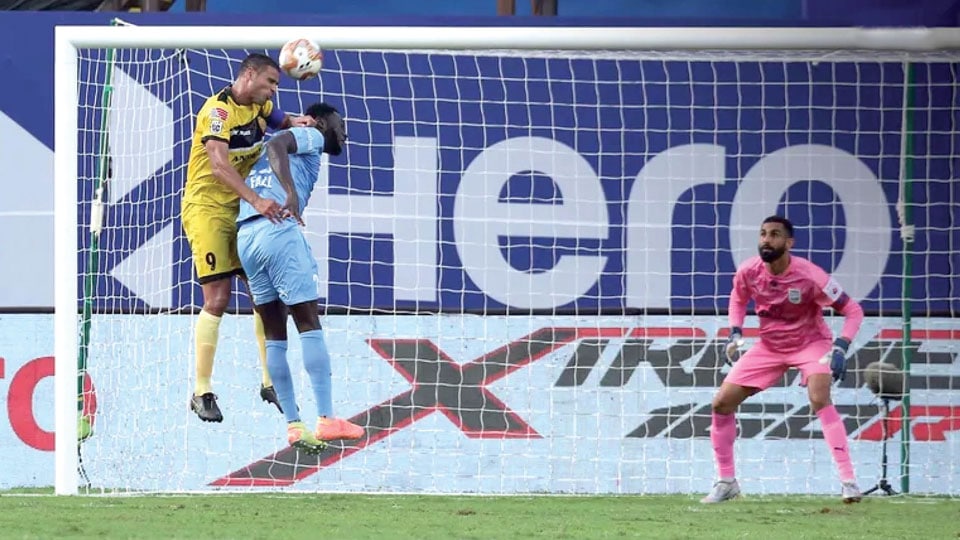 Jeakson Singh (Kerala Blasters FC) heads the ball in the match against East Bengal at Bambolim.

Mumbai City returned to winning ways in Hero ISL 2020-21 after a 2-0 victory over Hyderabad FC at the Tilak Maidan Stadium in Vasco yesterday. Vignesh Dakshinamurthy scored Mumbai’s opening goal in the 38th minute and Adam le Fondre added their second before the hour mark.

Ahmed Jahouh had a typically assured outing at the centre of the park for Mumbai. The midfielder’s dynamism saw him cover all areas of the pitch and finish with a passing accuracy of 76%. One of Mumbai’s most influential players, he had 96 touches of the ball and made two successful interceptions, four successful tackles, four blocks and four clearances.

Kerala beat East Bengal: A goal in injury time helped Kerala Blasters FC to a draw against SC East Bengal in Match 35 of Hero ISL 2020-21 at the GMC Stadium in Bambolim yesterday. After an own goal from Bakary Kone that put them ahead, SC East Bengal held on to their lead and almost clinched the victory before Jeakson Singh headed in the equaliser in second half stoppage time.

Anthony Pilkington was a key player for East Bengal and created one chance for his team. The Irish midfielder had two shots on target and was a strong presence defensively as well as he made one successful tackle and one successful interception.