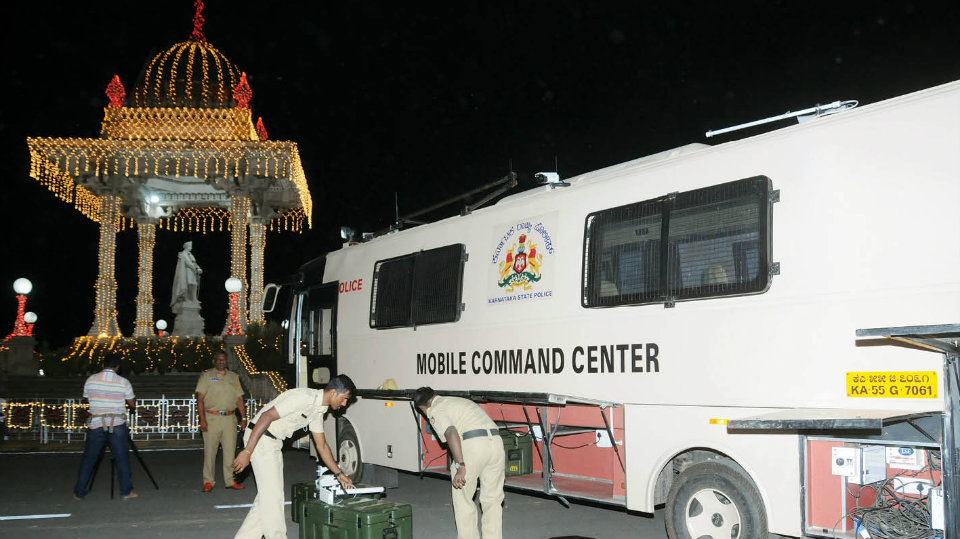 Mysuru: Help from Mysuru Police for assistance and control at any troubled area is just minutes away. A full-fledged Mobile Command Centre vehicle will work round-the-clock this Dasara to respond to any emergencies. And this state-of-the-art Command Centre is being used during Dasara for the first time.

The Command Centre helps surveillance especially during bigger events like Dasara and VVIP visits. Equivalent to a thousand eyes within a large area, the Command Centre (a hi-tech vehicle, which has all the features of a Police Control Room) will be on the move to capture all the action, live at all the places where it is stationed.

The mobile facility, for which Rs. 2.16 crore has been spent, will help in surveillance during bigger events or happenings as it has a reach of around one kilometre. In all, the Centre has 19 cameras including four around the mobile unit, four jacket cameras and a drone camera. There are only four such Command Centre vehicles in Karnataka. While Bengaluru has two, Mysuru has one and the twin city of Hubballi-Dharwad has one such centre. 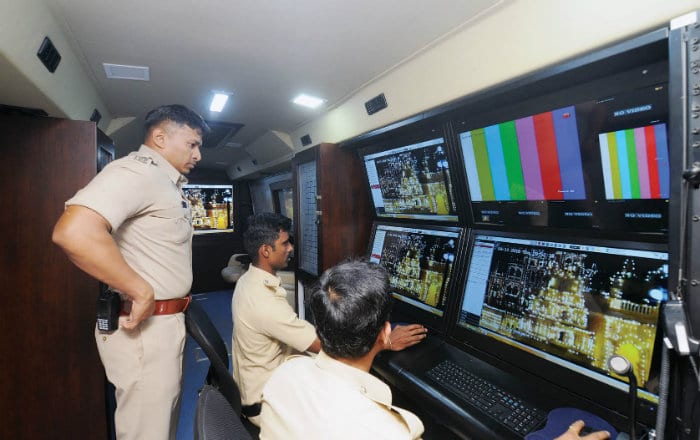 A Police official, who has been trained to operate the Mobile Command Centre, said that the mobile unit could effectively do the work of over 50 Police personnel on ground. It would be easy to keep vigil on activities of miscreants especially during large gatherings, he said.

Mistral Solutions, a technology design and system engineering company providing end-to-end surveillance services, has developed the technology for this Command Centre and has also trained select Police personnel in operations and reporting. 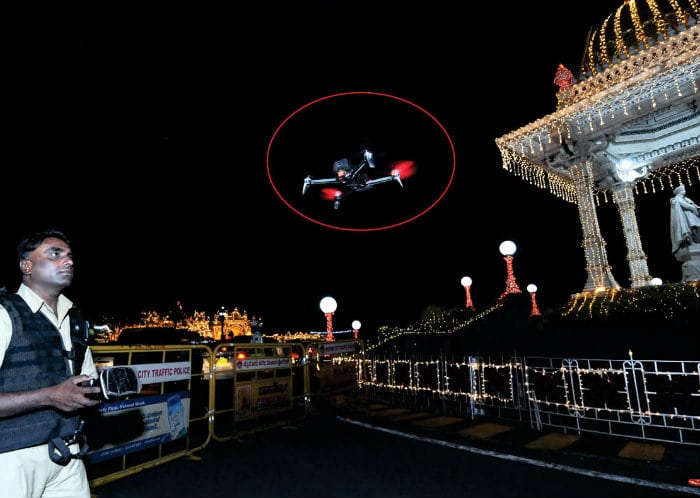 A cop operates drone camera (circled) that is part of Command Centre.

As of now, there are three operators for 24×7 monitoring — Nagesh from V.V. Puram Station, Raghu of Mandi Mohalla and Mayanna from Vijayanagar Police Station. The mobile unit is driven around by ASI Sardar from City Armed Reserve.

The Command Centre vehicle has four fixed cameras at the top and one zoom camera that can capture images and visuals up to one kilometre radius. Photos and live visuals can be relayed to the Control Room at City Police Commissioner’s Office. Also, information can be passed on to the respective jurisdictional Police if help has to be rushed within minutes.

There are four body-worn cameras where Police officers can capture images and videos as they move in a particular area. These high-definition cameras can also capture visuals up to one kilometre range. This apart, the Command Centre has a drone camera that can take high-resolution photos of the ground situation even from a height of 300 metres and can cover a distance of half-a-kilometre. 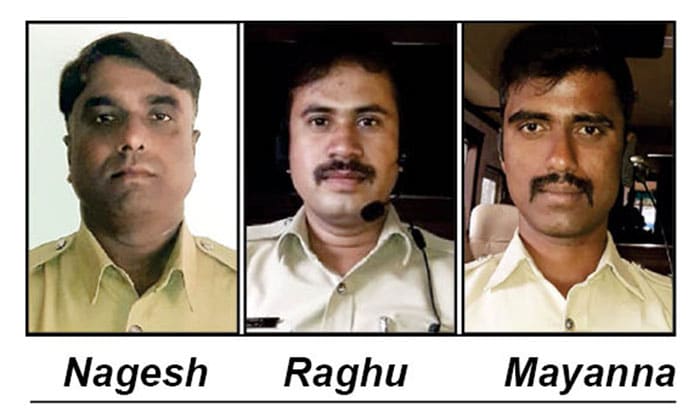 The multi-purpose vehicle can house 30 Police personnel inside at a time. “The main advantage of this hi-tech vehicle is we can see who is creating trouble in a particular area and it will help us track all the people involved. We can build case files on such people based on the photographs and footages   captured at the Command Centre,” said a Police officer.

This Dasara, the Command Centre vehicle will be used at places where there will be maximum crowd such as Yuva Dasara, Vijayadashami procession and the Torchlight Parade.