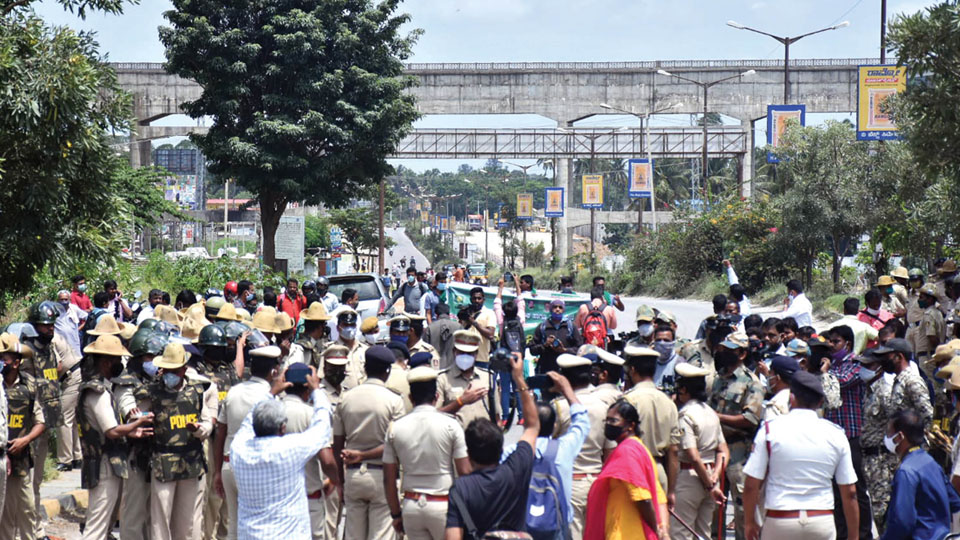 Mysore/Mysuru: Vehicular movement on the ever-busy Mysuru-Bengaluru Highway was disrupted for a few minutes this morning as farmers under the banner of Raitha-Dalita-Karmika Aikya Horata Samiti and a host of other farmer, labour and social organisations blocked the highway by forming a human chain at Columbia Asia Hospital junction as part of their ‘State and National Highways’ blockade stir. The stir was called today in protest against the recent amendments to Land Reforms, APMC and Labour Acts.

As part of the stir, more than 100 farmers carrying drums, a percussion instrument, converged at Colombia Asia Hospital junction and attempted to block the highway junction where four important roads (Ring Road towards Hunsur, Ring road towards Bannur, Mysuru road and Bengaluru road) intersect. But as the farmers did not have the necessary Police permission, the Police tried to stop them from carrying out road blockade, which led to a tense situation, with the protesting farmers entering into a verbal duel with the Police.

DCP Dr. A.N. Prakash Gowda arrived at the spot and diffused the situation by convincing the farmers that they had no permission for staging protest. However, the farmers managed to form a human chain blocking the highway  at for a few minutes, when they were taken into custody by the Police and sent to the CAR Ground in two KSRTC buses. The farmers will be let away later today.

Meanwhile, barring Mysuru-Bengaluru Highway, the much announced road blockade did not take place on any other highways as the Police, who were deployed in large numbers at important junctions had taken measures for thwarting road blockades, it is learnt.

2 COMMENTS ON THIS POST To “Highway Blockade: Police take protesting farmers into custody”