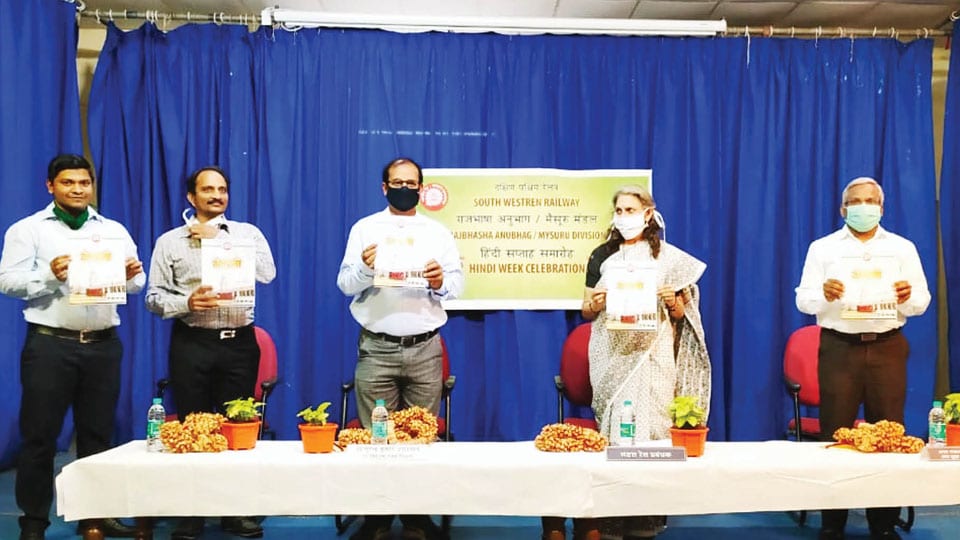 Mysore/Mysuru: As per statutory guidelines, Sept.14 is celebrated as Hindi Diwas in all Central Government Offices and  Mysuru Division of South Western Railway (SWR) also celebrated Hindi Day-2020 at Chamundi Club in Yadavagiri.

Divisional Railway Manager Aparna Garg inaugurated the programme by lighting the lamp along with others. She read out the message of Minister of Railways and later released the in-house magazine ‘Roshni.’

Surendra Kumar Upadhyay, Deputy Director (Official Language), Silk Department, Mysuru, who was the chief guest, said people should respect all regional languages and develop Hindi as a national language like a gardener protects and preserves different plants and flowers in his garden.

Ayush Kumar Pandey, Rajbhasha Adhikari, presented the annual progress report on the achievements made by SWR Mysuru Division. A. Devasahayam, Apar Mukhya Rajbhasha Adikari, read out the message of the Home Minister and informed that with the implementation of e-Office, the Mysuru Division has moved towards becoming paperless. Circulars, letters, etc., are also being sent in Hindi in e-office, he said. The programme concluded with singing of National Anthem.

During the fortnight-long celebration, various competitions are organised for Railway staff of the Divisional Office, according to a press release from Priya Shetty, Divisional Commercial Manager and PRO.