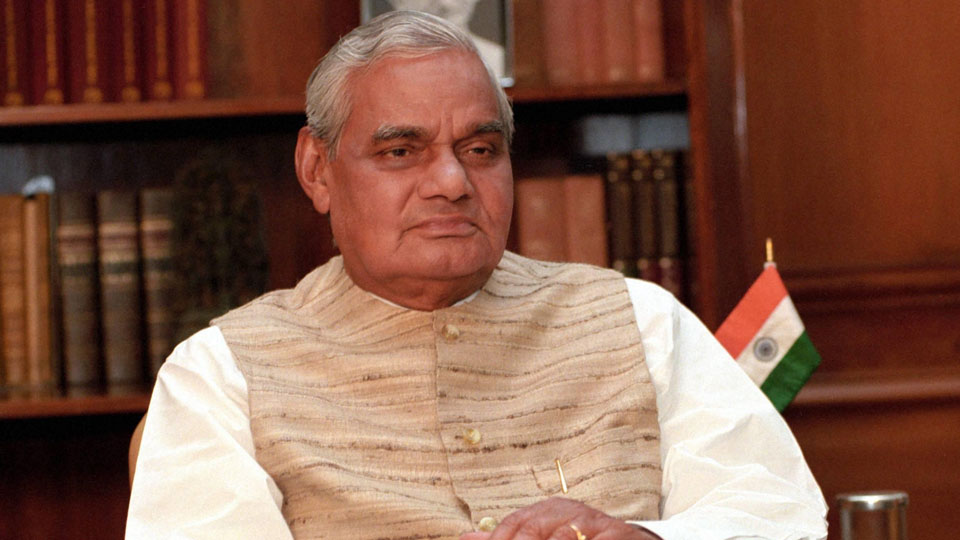 It was my good fortune to have met Vajpayee twice in New Delhi. He had not yet become the Prime Minister but was an MP. My first meeting with him was formal and not important. The second meeting was important. Swaraj Prakash Gupta, who founded the Indian History and Culture Society, was its Chairman also. I was entrusted with the responsibility of looking into the affairs of the Society in South India. This Society had arranged a conference in which Atalji, P.C. Chandar, Dr. B.N. Puri, Awadh Kishore Narayan and I took part.

I was the chairman of one of the sessions of this conference. It was to discuss the problems of Indian administration. Atalji had to speak on Kautilya’s Arthashastra. Due to some other programme, Atalji could not attend that session. But he attended the dinner. On that occasion, Gupta introduced me as a student of the famous South Indian scholar Prof. K. A. Nilakantha Shastry.

We were worried on why Atalji did not attend the session. Atalji, who was there, said that “I had prepared a research paper on Kautilya’s Arthashastra. But I learnt that a scholar Dr. Murthy from Mysore will preside over this session. I was scared of participating in this session.” Everybody had a hearty laugh. I felt happy and at the same time, I thought my responsibility has increased.

The present generation may know that Atalji was a Prime Minister of India. But many people may not know his greatness and more than that the poems he wrote. He was a great Parliamentarian besides being an orator. Whenever he spoke in Parliament, there used to be complete silence and other MPs were eager to hear his speech.

He was respected by all because of his sense of humour, generous personality and his impeccable behaviour. Atalji was born on 25.12.1924 in Gwalior. His father was Krishna Bihari Vajpayee while his mother was Krishnadevi. His early education took place in Victoria College at Gwalior and DAV College at Kanpur. He obtained M.A. degree in political science. In 1942 he took active part in ‘Chalejao’ Movement against the British Government. He was arrested and jailed. He later took interest in RSS.

By about 1951, he entered into active politics. He also played an active role in the establishment of Jan Sangh. He played an active role as leader of Jana Sangh from 1955 to 1977. He was elected as MP for five times from Lucknow, Uttara Pradesh, Gujarat, Madhya Pradesh and Delhi. During the eleventh Parliament he was the Opposition leader and was the Minister for Foreign Affairs (1977-79) during the rule of Morarji Desai. His contribution was the restoration of relation with China.

Additionally, Atalji found time to take interest in social and cultural activities. He was also a good writer in Hindi. As a journalist he edited ‘Rashtradharma’, ‘Panchajanya’, ‘Swadeshi’ and ‘Arjun’ and got a good name.

He has also published books such as ‘Meri Ikhyavan’Kavitaye’, ‘Sankalpa Kala’, ‘Sakteese Shanti’, ‘Loksabhame’ Atalji’ and ‘Mrityuyahatya. When he was in the prison he wrote ‘Kaidi Kaviraj ki Kundaliya’. His publication in three volumes is titled ‘Four Decades in Parliament’ in English.

As Prime Minister, Vajpayee gave permission to test nuclear bomb. As such, India entered the elite league of countries to produce nuclear weapons. But he said “it is not for destruction but for experiment only” because he was against killing innocent people.

Atalji had great faith in Gandhiji’s methods of working. He had realised that unless villages, States and India co-operated in this endeavour, nobody, no State nor India can be happy. Hence Atalji took care to see that the economic conditions of the villagers were improved. And he worked towards it.

His ambition was that India should be self-supporting without waiting for any foreign help. During the Independence Day speech from the Red fort he said, “I have a dream of great India in which nobody should die of starvation and be free from poverty.” On hearing this, people there gave a standing ovation. He continued and said, “Nobody in this country should be illiterate.”

In 1992 he was awarded the coveted Padma Bhushan. The administration of Prime Minister Narendra Modi declared in 2014 that Vajpayee’s birthday, Dec. 25, would be marked as Good Governance Day. In 2015, he was conferred India’s highest civilian honour, the Bharat Ratna. He passed away on 16.08.2018. Many people felt that this is the end of a Golden Era.

2 COMMENTS ON THIS POST To “Homage to Atal Bihari Vajpayee”