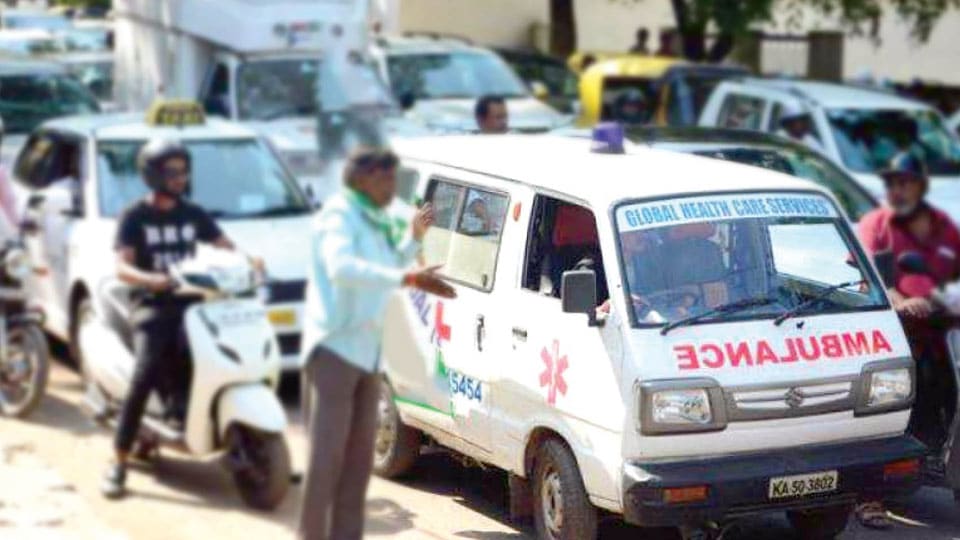 Blocking Ambulance should be criminal offence?

A week ago, the city Police arrested a car driver for deliberately blocking the way of an ambulance carrying an aged person who suffered a heart attack. The patient, 85-year-old Chandrashekar Acharya, was being brought to Narayana Multispecialty Hospital in Mysuru when a Hyundai i20 car moving ahead of the ambulance started driving in a zigzag manner.

Finally when the ambulance reached NH Hospital, Chandrashekar Acharya was declared brought dead. His family was informed that they had missed the Golden Hour, the critical period of one hour after an injury when a patient requires medical assistance to have a chance of survival. The death of Acharya was because of delay, caused by the arrogant and inhumane driver.

So, how was he punished? He was arrested and produced before a Court, which imposed a fine of Rs.11,000 and then let off with a warning!

A man is dead because of this driver and he was let off with a fine of Rs.11,000 and with a “stern” warning! The life of a man killed because of an arrogant driver, who delayed an ambulance with full knowledge that there was a patient inside the ambulance, is cheaper than the offence of overloading a goods auto? The fine for overloading is 20,000! But you kill a man by delaying his medical need you can go home after paying a fine of Rs. 11,000!

This was an opportunity to make an example and put fear among people who block ambulances and race behind them. But alas!

The IPC Sections under which this driver was booked carries an imprisonment of six months, but alas.

We wonder if the family will go in an appeal. It also makes us wonder if the car driver would have been let off if he had caused the death of a VIP? No way. The reaction is always different when it happens to your own.

This reminds me of two incidents. First, when mosquitoes infested Delhi High Court premises, in spite of many requests the PWD did nothing to control the menace. Then five judges fell ill. Then Lo and behold, the Indian Penal Code 303(A) which says: “Whoever causes the death of any person by doing any rash or negligent act not amounting to culpable homicide, shall be punished with imprisonment or fine or both,” was applied on PWD engineer in-charge. The Delhi Court said that the PWD engineer in-charge remained negligent in discharging his official duty and did not prevent breeding of Aedes mosquitoes in the District Court Complex. So, yes, serious action was taken when Judges fell ill.

Then, in a second incident, a few years ago, the Mysore-Ooty Road near the Gun House Circle was dug up and a huge crater was left uncovered, posing a traffic hazard. Two motorists fell into it and one child was hospitalised. Many small accidents continued and numerous requests were made by the public to the Engineer in-charge to close the death trap. But the Engineer did not respond. Then one day his own son fell into it with his motorcycle and died. The crater was closed immediately.

Unfortunately, we tend to respond only to extremes and continue to be only reactive. We forget to make examples when we have the opportunity. We miss the chance to send a strong message, to irresponsible members of our society who put others’ life at risk.

No wonder, the injured in the violent clashes in Northeast Delhi were ferried to hospitals on bikes and vans as protestors were blocking ambulances and other vehicles from entering the areas. Even in Mysuru just last year when an overzealous Police towed students’ vehicles, a bunch of students blocked a major State Highway and an ambulance that came from Hunsur could not pass through. All this just because 13 bikes were towed away! Couldn’t they have simply protested in front of the Police Station? Even worse, some of the students were grinning as they protested like it was a funny event.

For now it only seems that for every regression there is no repercussion. Only a price to pay. And the price for blocking an ambulance and taking a life is just Rs. 11,000 and Oh! a “stern” warning.

P.S.: May be it’s time to change this ‘blocking ambulance’ law. May be another clause should be added that states that “intentional blocking of ambulance leading to death, is culpable homicide not amounting to murder.”