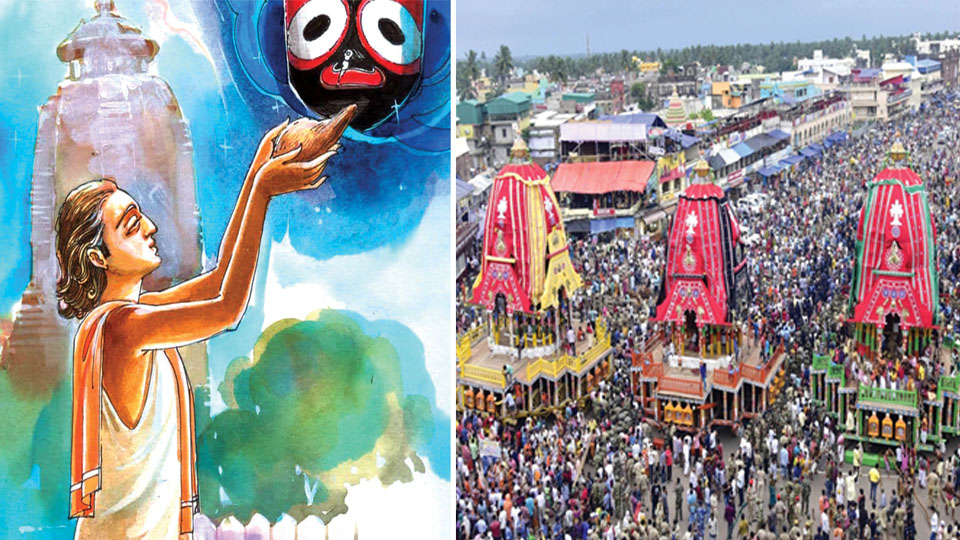 Among the Hindu Gods, Krishna, for me, is by far the most human, and that’s why I like him. He is a God of paradoxes, like us mortals.

His name literally translates as ‘black’, challenging the traditional Indian discomfort with the dark complexion. He is visualised as either cowherd or charioteer, never as priest or king.

Krishna’s mother is not his real mother, his beloved is not his wife, and the women he rescues are neither his subjects nor members of his family.

Krishna embraces worldly life with its myriad sensual and spiritual complexities, rather than seeking to reject or control it.

A very ‘unreligious’ attitude for a God! And that makes him very interesting and relatable.

In these very polarised times, I have two stories related to Lord Krishna that should remind us that we can be better Indians. They are stories of how art and society benefit when there is kindness and acceptance above religion.

Salabega was the son of a Mughal Subedar in 17th century Odisha. He followed in his father’s footsteps and joined the Mughal army, and during a war campaign, Salabega was severely injured.

Since his mother was a Hindu and a devotee of Lord Jagannatha, the other name for Krishna, he prayed to Lord Jagannatha. He became well and was so grateful that he went to Puri to visit the Jagannatha Temple. He was not allowed inside because he was Muslim.

Salabega was heartbroken, but he didn’t give up. Instead, Salabega expressed his thanks by composing and singing Bhajans in praise of Lord Jagannatha. He then waited to get his darshan during the Rath Yatra when the deity of Lord Jagannatha is brought out in a huge chariot allowing the public to have darshan.

The story is that, while Salabega got his darshan, he did not get entry into the Temple, so he built a hut on the Rath Yatra route to see his favourite God every year.

READ ALSO  Pushing for an Emergency?

One year, Salabega was out of town; he fell sick and could not make it back in time for the Yatra. He prayed to Lord Jagannatha to wait for him. After all, he gets to see him only once a year since he is not allowed into the Temple.

Sadly, the Rath Yatra began, and as the chariot of Lord Jagannatha was being taken on the usual route, the wheels got stuck. The Yatra stopped. It happened to get stuck right in front of Salabega’s hut.

He prayed to his heart’s content and then stepped back. After a while, the chariot wheels, which were reluctant to budge, suddenly moved!

Even today, 400 years later, the Chariot of Lord Jagannatha, one of the most celebrated Gods in the Hindu pantheon, stops for only one mortal, and that is for a Muslim man!

This is the beauty of India. Yes, modern politics makes us forget that being humane comes first.

The second story is a personal one I wrote about earlier, but it is relevant to present an abridged version on Krishna Janmashtami.

In 2020, for New Year, I got a gift. It was a beautifully wrapped slim package. The note on it said it was from R.G. Singh of Ramsons Kala Pratishtana Art Foundation.

The gift was tedious to unwrap as it had too many layers. So when R.G. Singh called to check if I had received the present and what I thought of it, I asked him if he had sent me Draupadi.

Confused, he asked me, “What do you mean?” I replied, “Because unwrapping your gift seems to be never-ending.” Finally, at wit’s end, I ripped it apart and viola! A beautiful painting of Lord Krishna playing with his friends lay before me.

But what made this painting a great gift was not just the image of Lord Krishna but the painter whose work I always wanted but never could get — Kamal Ahmed from Gadag.

Artist Kamal Ahmed has evolved a unique style of painting that does not conform to any of the known Indian schools of painting, but they are beautiful. His life story is just as admirable as his paintings.

Kamal was born in a poor Muslim family in Gadag, North Karnataka. That he had six other siblings didn’t make life easy. The financial burden hindered his education until he was accepted into the Thontadarya Mutt in Gadag.

At the Mutt, he got free education and food. And it was here that he was exposed to Hindu mythology which inspired him to begin his artistic journey.

Today, he is a practising Muslim who loves painting Hindu Gods and their stories! In the case of Kamal, he likes painting, especially Bala Krishna.

Now, thanks to an open-minded Muslim family that admitted their son to a Hindu Mutt, choosing their child’s education over religion and thanks to a Mutt that saw a poor boy who needed education rather than an ideal candidate for conversion, we have art today.

Also, thanks to a non-threatening environment, a young boy absorbed the stories of a new religion without prejudice or suspicion, and today, we have an exemplary artist with a unique style.

An artist who, while performing namaz at his local mosque in Gadag, travels all the way down to Udupi to visit the Krishna Temple to feel inspired.

This painting hangs before me as a symbol of what India should be. This painting is a new addition to a painting by Mohammed Osman, also a Muslim artist from a village near Hyderabad, who too loves painting Lord Krishna but more so decorated Basava during Sankranthi.

In these turbulent times where people have become so divisive, and as we celebrate Krishna Janmashtami, let’s take hope from the stories of Salabega and Kamal Ahmed. And let’s be inspired by Mutts like Thontadarya Mutt, who chose to propagate knowledge, acceptance and kindness rather than sneakily plan conversions.