Home » Columns » God save America for the sake of Democracy 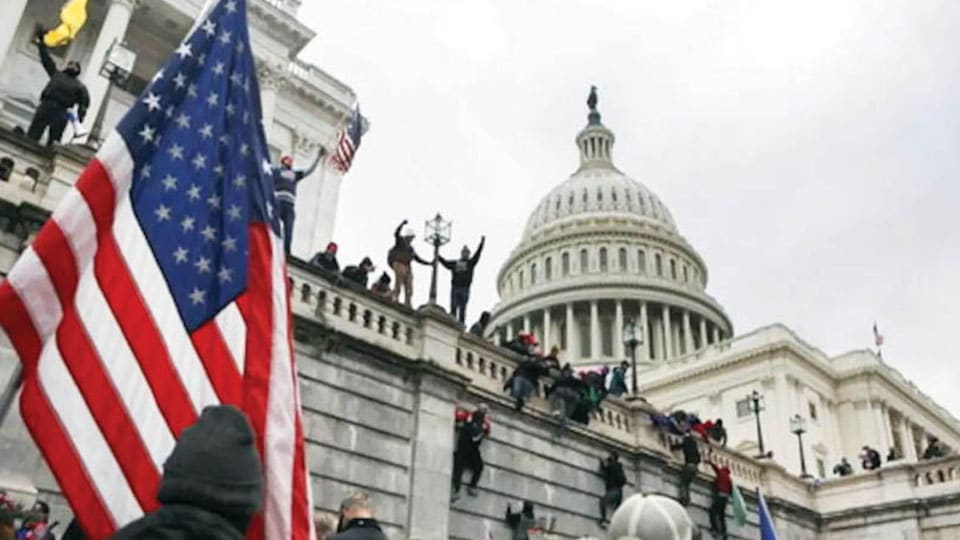 God save America for the sake of Democracy

The United States of America (USA), the global purveyor of Democracy took a hit to its democratic credentials as a group of rioters took over Capitol Building, the seat of the US Government. As the rioting unfolded, many had that “Schadenfreude” feeling, the joy one feels when something bad happens to a person they don’t particularly like but can’t confront. And it is understandable.

The USA has, for far too long, self-anointed itself as the flag-bearer of Democracy across the world. And it has used that position to “deploy” USA-certified Democracy in nations that had none, and even in nations that already had one! Now, some leaders and writers say USA got a taste of what they do in other countries — a coup.

President Trump may have tried to have a coup, but it was a Trump kind of coup, which means it was not. Not even close. Only Trump supporters and media that is obsessed with showing Trump as a deranged super villain think it was a coup.  May be they should hear Lord Mountbatten’s line from the Netflix show ‘The Crown’ to understand the complex machinations that goes into pulling off a coup.

Mountbatten, when approached to head a coup against Prime Minster Sir Harold Wilson, says “What all successful insurgencies have in common are five key elements. Control of the media, control of the economy and the capture of administrative targets, for which you need the fourth element, the loyalty of the military, tens of thousands of unquestioningly loyal servicemen, and even in my heyday, I could never command that. Which brings me to the fifth element. Legitimacy. Now, our Government draws its strength from long-established institutions that support it. The courts, body of common law, the Constitution. For any action against the State to succeed, you’d have to overthrow these as well. But in a highly evolved Democracy such as ours, their authority is sacrosanct. Which is why, gentlemen, a coup d’état in the United Kingdom… doesn’t stand a chance.”

So no, what happened in the US Capitol was not a coup, it was just an angry mob of daring sore losers.

It was an exhibition of misguided rage by a mob of mis-fits taken in by a golden-haired false messiah who fed their deepest prejudice and insecurity with hate, fear and misinformation through large feeding tubes of social media.

This daring exhibition of hate makes one wonder, how did USA, a nation that elected a black President for two terms,  a President who spoke sense, a President who inspired people across the world not just his country, end up electing a President who destroyed the most cherished ideology of the United States of America  — Democracy.  The answer is,  “Opportunistic Liberalism.”

The liberals have failed Democracy by their failure to uphold true liberalism which turned conservative politics into fanatic right wing politics.

Liberals’ constant treating of citizens of one nation with two different yard sticks, their habitual minority appeasement policy (I wonder how former PM Dr. Manmohan Singh would distribute vaccines if he still was the PM, after all it was he who said minorities have the first right to resources in our country!), their constant feeding of a sense of “victimhood” to one group and projecting other as “the enemy” has today rendered liberalism a farce and has led to the rise in right wing fanatics which we have to suffer.

Liberals feed off the “fear” of minorities, the Right feeds off the “disenchantment” of the majority. But both make political merry while the social fabric of a nation is shredded. This can be seen in most Democracies today.

As Shashi Tharoor, the few rational and truly liberal politicians we have,  said there is a lesson for us in what happened in the USA. He is right.  So now will his party ask the farmers to stop threatening the Government saying “Take back laws or we are ready to die.”  If this is how we make laws, then this nation’s Highways will become permanent sites of protest.

There is also an important lesson for our Prime Minister Modi in the American saga. Just like how we don’t like Justin Trudeau meddling in our country’s politics and policies, our PM shouldn’t play campaign mascot in others’. Where was the need for PM Modi to endorse Trump? May be, the Prime Minister would have done well to heed to the late President Pranab Mukherjee’s advise.

In his posthumous book “The Presidential Years 2012-2017,”   Mukherjee says “I do not subscribe to the belief that such special friendships have any worth when it comes to international relationships, where every relationship is impersonal.”

That said, how will PM Modi deal with Biden after having endorsed his opponent? Can he hug his way out ?

For now, Trump’s Presidency will end soon, but what has ended sooner is America’s image as a stable Democracy. It is indeed a sad sight.

As much as anyone hates American behaviour as the “Policeman of the World” or the constant chest thumping proclaiming to be  “the greatest country in the world,”  they did push for Democracy by example. They were indeed a great example for what robust Democracy brings to its people, such as strong economy,  an ecosystem of innovation and upholding of personal liberties, which many followed.

Let’s not forget post-World War II, it was the Americans who inspired both Western and Eastern Europe to chose Democracy.

More importantly, it is a Democracy we desperately need to be stable and strong as powerful Communist nations like China and undemocratic ones like Russia restlessly circle the globe trying to feed off weak nations to further their ideology and create a world in their own image.

To express a pedestrian analogy, America is to world Democracy, what Virat Kohli is to Indian cricket. Yes, he is a showman, comes across as being arrogant,  at times even a jerk and sometimes does not even deliver as a cricketer, but we need him on our side, because he has the capacity to instil confidence with his talent, tenacity and work ethic which makes the Opposition wary and most times helps us win.

For now, guess it’s time for American politicians to change their standard speech ending line from “God Bless You and God Bless America” to “God Help Us and God Save America,” for the sake of World Democracy. Amen.