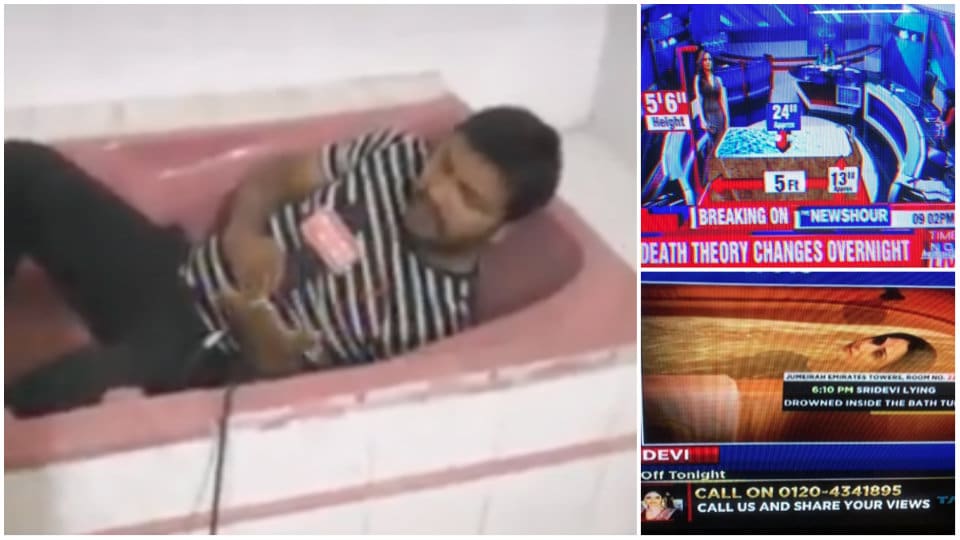 On Feb. 24th Sridevi died. On 25th our decency died. Following Sridevi’s death, everyone; the media, celebrities and the public went overboard with their expression of grief and praise.  Then they turned into vicarious pleasure seekers, publicity mongers and conspiracy theorists.

TV news channels were the worse of the lot. In the initial hours of the news of her death, when it was reported that she died of a heart attack, news agencies did their job – reported news.

The only unusual reporting was when they suggested that Amitabh Bachchan had become Nostradamus, the soothsayer. The previous day Bachchan had tweeted, “I don’t know why, I feel this strange fear.”  So, the media concluded that Bachchan had predicted Sridevi’s death.

All was restrained and solemn about Sridevi’s death, until the media sniffed an opportunity to up their TRP. The moment it was reported that Sridevi had drowned, news channels turned into Balaji Telefilms as news anchors and reporters turned actors.

English news channel CNN-News 18 had super imposed an image of Sridevi lying in a bathtub with a caption “6:10 PM Sridevi Lying Dead in the Bathtub”. Meanwhile, Times Now showed a picture of Sridevi standing with her height marked along with a bathtub with its length, width and depth labelled. It looked like a physics classroom, with the anchor calculating how a 5-foot-6 inch woman could drown in a tub that was just 5-feet long, 3-feet wide and 24-inches deep!

I then flipped to see what the regional channels were up to. I landed on a Telugu news channel whose reporter actually got into a bathtub. He then enacted the many ways Sridevi could have drowned by sliding into the bathtub. Finally he concluded that Sridevi could not have drowned. I, on the other hand, was drowning in my own sorrow that my profession has been reduced to, a tamasha.

While the TV news channels fought for TRP, celebrities and politicians got their own moments of fame. Soundarya Rajinikanth said, “We will miss you Pappika” while Rani Mukerji said, ‘Will miss Sridevi calling me laddoo”. Who cares if Sridevi called someone Pappika or Paprika? Who cares if she called someone laddoo or rasogolla? All that these statements did was convey to us that these celebrities were close to Sridevi and nothing more.

It seems that people have little inclination to really reflect on what Sridevi meant to them, what they learnt from her and share those life lessons.

The once brilliant filmmaker Ram Gopal Varma expressed his anger in an over-dramatic  blog titled “I HATE GOD FOR KILLING SRIDEVI AND I HATE SRIDEVI FOR DYING.”  Later it was reported that he may be making a biopic on Sridevi. Already?!

Then came the politicians. Celebrity politician Amar Singh informed us that had Boney Kapoor not left his wife alone in Dubai she would still be alive. Later it was time to show off that he was well-connected as he said, “I have talked to Abu Dhabi’s Sheikh Al Nahyan, he assured me that all formalities and reports are complete. Her mortal remains should reach India by midnight’’.

Even Shashi Tharoor had a message, a quote from Austrian poet Rainer Maria Rilke’s Sonnets to Orpheus. It was in his ‘English-Vinglish” style. I didn’t get it. Sridevi too may not have.

These days no celebrity death escapes the keen eye of Dr. Subramanian Swami who claimed that Sridevi was murdered and added saying “We should be wary of the illicit relationship between cinema actors and Dawood Ibrahim”!  Case closed.

Many condolence messages from celebrities, politicians and fans were so over the top and lacking in substance that it came across as self-promotion. They seemed  “modestly immodest”.

Sridevi would cringe at the way some of the people are professing their love and grief. In some cases it seems insincere like when Rakhi Sawant could not stop crying and kept repeating again and again “I love you so much”. We were worried she would drown in her own tears.

We are all obsessed with birth, marriage and death, more so of a celebrity. And in a celebrity death, we derive some perverse satisfaction that no matter how rich, beautiful or famous, in the end we all have to go the same way. But our obsession with Sridevi’s death has taken a ghastly turn.

Sridevi died young, it was sudden. But now, even the people who post # Sridevi RIP… by posting private pictures, and consuming conspiracy theories about her death have done anything but let Sridevi Rest In Peace.