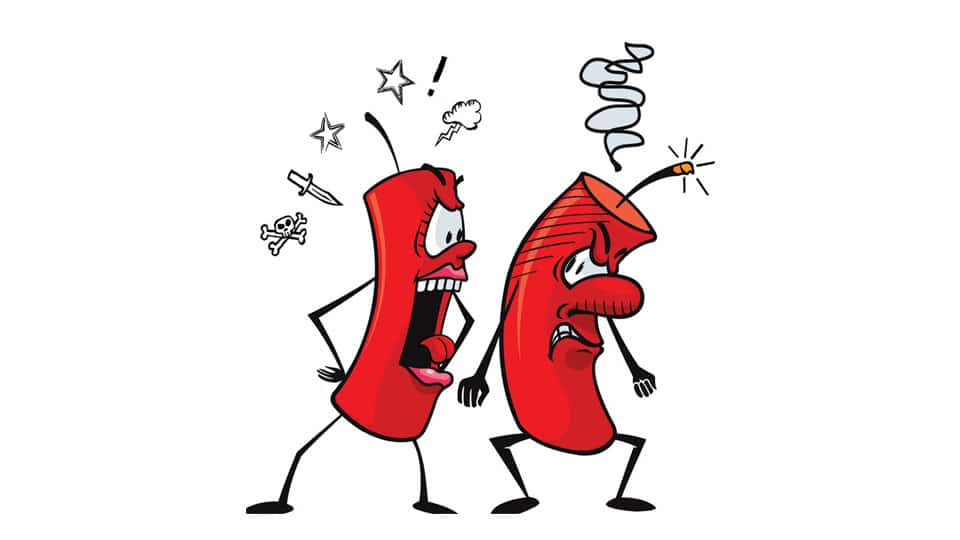 The Month of Tipu & Crackers

Come November, two controversies will always crop up — Tipu Jayanti and bursting fire crackers. And both reflect lack of insensitivity to fellow citizens.

In the case of Tipu Jayanti, we wonder if this coalition government would have celebrated the Jayanti had Tipu Sultan done in Mandya what he did in Kodagu?

Tipu Jayanti is being celebrated because the government says the ‘Tiger of Mysore’ was a secular king and a freedom fighter. Tipu was a benevolent king as he donated money to Nanjangud temple and Sringeri Mutt but he was buying peace to have control, not because he was secular.

Also the inscription on the hilt of Tipu’s sword begins with the words, “My victorious sabre (sword) is lightning for the destruction of the unbelievers…” Does that sound secular?

And was he a freedom fighter? Truth is Tipu was a warrior. In fact, none of the kings who fought the British Raj were freedom fighters. They were warriors trying to either expand or save their kingdom and uphold their Pride, not Indian Pride of course, because there was no India back then. But who cares for such details.

The truth is our politicians are ignorant and callous. Ignorant of our history and callous in their attitude towards the sensitivity of people, especially the ones who are not a vote-bank. And Kodavas, who were massacred by Tipu Sultan are not a vote-bank and so they don’t matter to the State government.

Now, as Kodavas are forced to witness a Tipu Jayanti under Police protection in the district capital Madikeri, this Valley, like Kashmir, may soon turn into a Valley of Discontent. And like Kashmiri Pundits, Kodavas too may be driven out of their homeland but who cares.

For now, thanks to Tipu Jayanti the hills that were filled with mist and fragrance of coffee blossom, now reeks of fear and disharmony.

Thank you, Congress and JD(Secular) for your special brand of secularism — insult one community to appease the other. How different are these two parties from the BJP whom they accuse of insulting minorities to appease Hindus?

Of the 27 Jayantis that the State government celebrates, Tipu Jayanti is the only one that doesn’t have political consensus. Interestingly, a few BJP leaders also celebrated Tipu Jayanti until it was declared a State festival and became a political tool.

Now what has left many of us wondering is why both the CM and the Deputy CM were missing from all Tipu festivities? Is it because our superstitious CM is worried about the rumours that bad luck befalls any one who celebrates Tipu? From Sanjay Khan to Vijay Mallya and from Siddharamaiah to… may be the present awkward coalition?

To begin with, the cracker issue has been one big mess of misinformation and confusion. The Supreme Court said we could burst crackers BUT… only GREEN crackers ! But what is this green cracker the SC speaks of?

According to the SC, a “green cracker” is one which reduces the pollutants and harmful gases by 30-35% and doesn’t contain any chemicals, which have been banned. But does such a cracker exist? Yes, but it is not available in the market.

So the public only took note of the news that they can burst crackers from 8 pm to 10 pm and since the cracker market was not regulated, the shop owners sold regular crackers which people bought and burst them well beyond 10 pm.

Before we assume people of Karnataka are law-abiding citizens, we must consider that our law-keepers were deaf because many people in our own city were bursting crackers beyond 10 pm.

Even in a country like USA where on July 4, their Independence Day, they have a tradition of bursting crackers, nearly 23 States out of 50 banned sale of crackers. Instead, the State puts a fireworks show for a few minutes that people can watch.

In urban China, all fireworks by citizens is banned unless specifically allowed by a licence. Everyone one is taking steps to reduce air and sound pollution and we should too considering that by 2030 half of Indians will live in cities.

This being the case it’s time we prepare now. Already air pollution is the fifth largest killer in India. According to “The Global Burden of Disease (GBD) Report” published by the World Health Organisation (WHO), 6,20,000 premature deaths occur in India from air pollution-related diseases every year ! Yet, Indians don’t do much to  reduce pollution.

Yes, indeed Supreme Court can ban old vehicles,  governments can tax vehicles entering city centres, they could increase metro lines, the RTO can have emission checks, the Pollution Control Board could do a better job of controlling industrial pollution, but …

May be we the people can also do our bit  by just lighting lamps and may be burst fewer crackers for a short time. Is there really a need to burst crackers for hours polluting and disturbing your fellow citizens?

May be, the SC needs to take a serious look at all religious pollution — from the loud call to prayer to bursting of crackers to pendals playing music all night.

It’s time to stop the ungodly pollution in the name of God. It is unfortunate that people celebrate festivals and birthdays even when it can cause inconvenience and heartache to their fellow citizens, be it Tipu Jayanti or bursting crackers late into the night.

Yes, we may build smart cities, but if we are not smart about our environment and are weak in implementing the law… we are just going to end up with giant dump cities !!

3 COMMENTS ON THIS POST To “The Month of Tipu & Crackers”