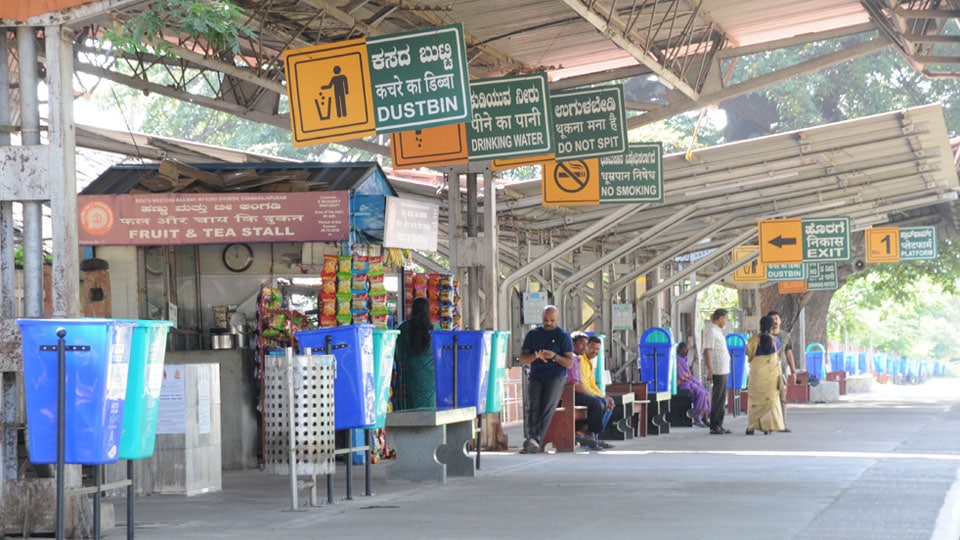 A Railway Station is usually known for its beautiful ambience, passenger-friendly amenities or its imposing structures — the City Railway Station, for example. Will a Railway Station ever be famous for its dustbins? Not really. But if there are no dustbins, that it will hit the headlines.

Here is a Railway Station in our own Mysuru that is becoming famous for its dustbins. So many are the dustbins that every step one takes inside this Railway Station invariably leads to a dustbin! In fact, there are more dustbins here than the number of people at this Station at any given point of time.

These brightly-coloured dustbins are omnipresent here and more than talking about trains and their lives revolving around trains, people arriving and leaving this Railway Station talk about dustbins — Bin here, Bin there and Bins everywhere.

Well, this is the Chamarajapuram Railway Station where the authorities have taken the Railway Minister’s diktat to maintain cleanliness tad too seriously. But have these dustbins made a difference and is the place clean? The answer is a big NO. The number of bins is also marring the old-world charm of the Station. Unhappy with the cleanliness levels on Railway premises, the Indian Railways, under its Swachh Bharat Abhiyan, instructed its various wings for efficient disposal of waste arising out of pantry car services and static units and also directed to provide adequate bins on platforms and by the side of stalls at all Railway Stations for environment-friendly disposal of waste.

Enthusiastic to implement the bosses’ orders, more than 150 dustbins have been placed at this small Railway Station and it looks like the authorities have dumped these bins as they have procured more dustbins than the required number. 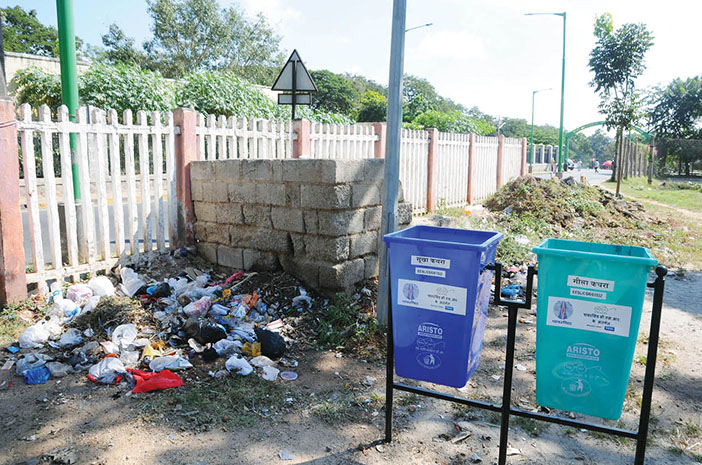 Dustbins not put to use

Enter this Railway Station and you cannot miss the green (wet waste) and blue (for dry waste) bins. They are placed in close succession both inside and outside the Station. Unfortunately, most of the dustbins are not put to use and people are dumping waste right under these bins. Checking for waste inside these dustbins itself is a herculean task for Railway Station cleaners every day.

The Railway authorities installing many dustbins would be justified if thousands of passengers arrived daily at Chamarajapuram Station that is located at K.G. Koppal. But only five to six trains pass this station and only a handful of passengers come here to board the trains in the morning or in the evening. Having more than 150 dustbins at a Station which has only one platform is a criminal waste of money and resources. 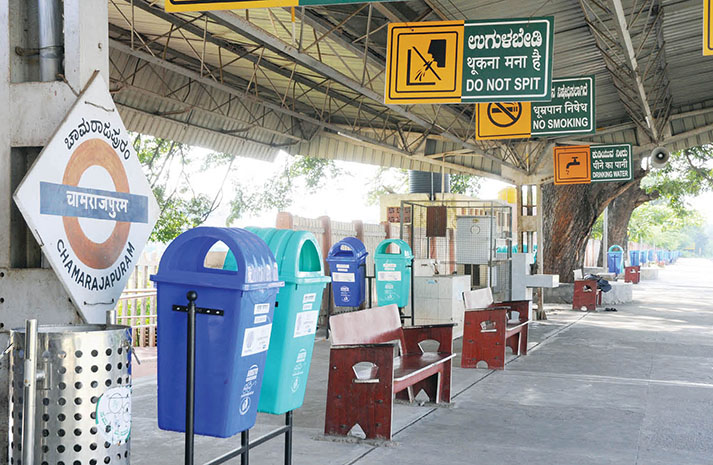 While dustbins are placed indiscriminately on the platform and adjacent to stone benches, one can find many bins inside the small and congested waiting room where at the most there is a need of only one or two waste collectors.

Apart from the green and blue bins, iron dustbins have also been placed all over Chamarajapuram Station making it a literal Bin-Station.

Moreover, if the Railway authorities are so much bothered about cleanliness, why have they kept the toilet for the physically challenged locked permanently, ask passengers. Disabled passengers have to struggle to relieve themselves as the toilets are kept locked.

Officers manning the Chamarajapuram Railway Station are too scared to come on record on the issue of ubiquitous dustbins. They just say that they were following orders from the higher-ups and this is a temporary measure. Excessive dustbins will be cleared and shifted to stations that require them the most, they said on condition of anonymity.