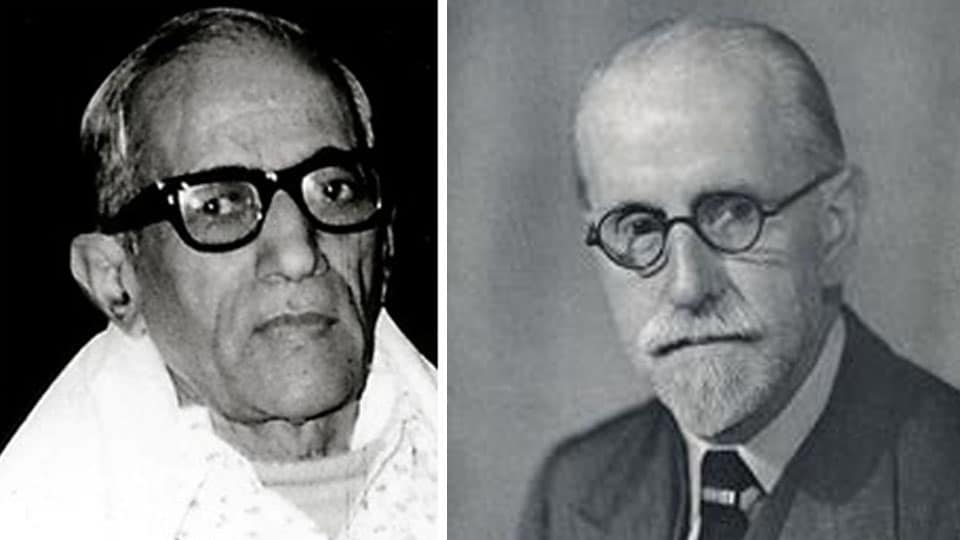 When I was browsing through some literature on Prof. H. M. Shankaranarayana Rao, a write-up in Kannada with the title ‘Unwin of Kannada’ written by M. Satyanarayana Rao of Geetha Book House-fame, attracted my attention. A great Publisher can understand and appreciate another equally great Publisher more intimately.

For the benefit of those who are not familiar with Unwin, I may add that Sir Stanley Unwin of England was one of the Publishers known all over the world for publishing books of everlasting value written by distinguished authors. For want of a better title, I simply copied that title to pay homage to Prof.  H. M. Shankaranarayana Rao, the architect of Sharada Mandira, a Kannada Publishing House which has made Mysuru City proud.

Though he was elder to me by two decades, I had the privilege of knowing him fairly intimately. Placing Prof. Shankaranarayana Rao on the same pedestal occupied by Unwin is perhaps the best tribute to Prof. Rao.

Prof. Shankaranarayana Rao (1913-1997) was born at Harihara, a place of great antiquity sanctified by Harihareswara temple built by the Hoysalas eight hundred years ago. Shankaranarayana is another name for Harihara, a composite deity which establishes the identity of Siva and Vishnu, a wonderful concept. Instead of continuing as the priest of this temple, Shankaranarayana Rao chose to get modern College education. Any other person would not have even dreamt of College education when poverty was staring at him. But the young Rao had a dream of his own.

In those days, the concept of weekly meals was very popular among poor students. Weekly meals did not mean taking food once in a week but eating each day at a different house in turn with the consent of the owner of the house. In fact most of the distinguished persons have grown under this umbrella of weekly meals.

Shankaranarayana Rao had arranged for weekly meals for all the seven days of the week. He joined the Maharaja’s College and automatically got 50% exemption from the payment of the tuition fee. But Rao could not afford to pay the remaining 50%. He met Principal Prof. J.C. Rollo (Englishman) and told him that he is poor and surviving on weekly meals.

Prof. Rollo understood this as eating once a week and asked the College Manager if this is true and the latter replied ‘Yes, Sir.’ And Prof. Rollo granted Rao exemption from the payment of the remaining 50% of the College fee. This enabled Shankaranarayana Rao to prosecute his College education. This incident sounds like a fairy tale to the students of the present generation.

H. M. Shankaranarayana Rao had the good fortune of getting a Master’s degree in Kannada literature under the luminaries like B.M.Sri, Ti.Nam.Sri, T. S. Venkannaiah, A. R. Krishnasastry, DLN, M. H. Krishna, Srikantha Sastri, Rallapalli, M. Hiriyanna  and others. His friends like Paramesvara Bhatta and K. Venkataramappa gave him good company. After some initial struggle, Shankaranarayana Rao joined the Sarada Vilas College as a lecturer in Kannada, became a Professor and finally emerged as the Principal of that College.

During his leadership, Sarada Vilas College attained name and fame as a great centre of education and became popular. H. M. Shankaranarayana Rao paid great tribute to the management of this College by saying: ‘This is perhaps the only College where the Principal and the staff are allowed to work without any interference from the Management.’

Prof. Shankaranarayana Rao was a man of innovations. His creative mind always aspired for new things to help the society. Once he wrote a long essay in Kannada and wanted to get it published. Instead of going and waiting at the doors of the Publishers, he thought of starting a Publishing House of his own and serve Kannada.

At the suggestion of Ti.Nam.Sri, it came to be called ‘Sharada Mandira’ (House of Goddess Sharada, the presiding deity of Knowledge). From that day onwards neither Sharada Mandira nor Shankaranarayana Rao looked back and Rao became a Kannada Publisher.

In the beginning, he published his own books and began approaching other authors who came in search of Shankaranarayana Rao with a request to publish their books. Rao has published over four hundred titles of great authors including A.R. Krishna Sastry, Veesi, Gorur, Ti.Nam.Sri, DLN, K. Venkataramappa, Pu.Thi.Na, Murthy Rao, Krishnamurthy, Ashwattha, Tarasu etc. Thus practically all illustrious writers of that period have found a place in Sharada Mandira. This is not a mean achievement.

Prof. Shankaranarayana Rao enriched Kannada literature by publishing his own 25 books. As a student of History and Epigraphy, I have always admired his scholarly monograph on Harihareswara temple at Harihara. I had suggested to him to get it translated into English so that non-Kannadigas would be benefitted by it.

Another virtue which has endeared Prof. Rao to the Authors and Publishers is the way he respected the authors. He believed that an author is the focal point of the literary world and hence he should be respected and rewarded properly. He started the practice of giving royalty to authors in a single lumpsum. In addition he has helped many authors by giving financial help in times of needs such as marriage, buying a site or completing a house etc. This showed his concern for the authors who were the backbone of the Publishing industry.

In this connection I may quote what Prof. Rao told me once. ‘I very much desire to give you royalty; please give me a manuscript.’ Unfortunately, I could not do it and the loss is mine.

Prof. H. M. Shankaranarayana Rao was not merely a great Publisher but a great scholar in Kannada. He has written more than 25books in Kannada including independent works and edited old classics. Fortunately, many of his works became text books and the students were the real beneficiaries. His beautiful Kannada handwriting has been admired by his contemporary scholars. Some twenty years ago, I received a beautifully written post card from him.

It seems he was reading Ranna and at one place, he saw a phrase ‘posa-pon’ meaning new gold and it did not suit the context. In my book on coins of Karnataka, I had indicated that ‘pon’ is a gold coin and this meaning suited his context, as newly minted gold coins. He congratulated me for this interpretation.

I used to meet Rao occasionally in the evenings at the first floor of the famous Geetha Book House at K. R. Circle. Though it was a small place surrounded by books on all sides, it was made a pleasant place by the brothers Satyanarayana Rao, Gururaja Rao and Gopalakrishna. Prof. Rao, Venkataramappa, HSK, H. M. Nayak used to be there with pleasant conversation on literature, men and matters laced with generous comments without malice to anybody. Light eatables were always there. I was the youngest of the lot and the horizon of my knowledge was broadened greatly. Alas! Such meetings are not held nowadays either in Colleges or in homes or when friends meet. Now it has passed into the pages of history.

In the meantime, it is our duty to salute and pay homage to Shankaranarayana Rao who has made Mysuru city proud by his Publishing House Sharada Mandira.

7 COMMENTS ON THIS POST To “Homage to Unwin of Kannada: Prof. H. M. Shankaranarayana Rao”