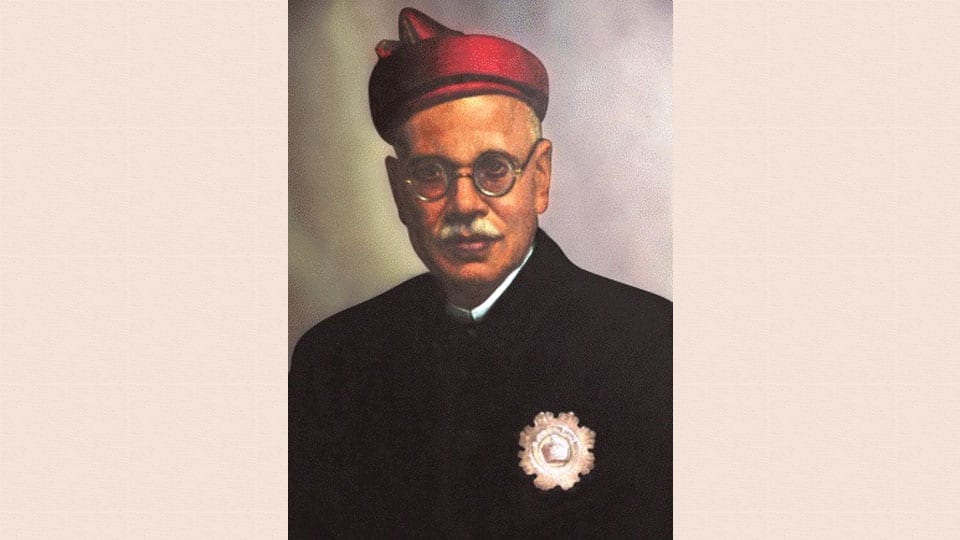 Some years ago we (Sudha Murty, N. Ramanuja, Mathoor Krishnamurthy and myself) were discussing about various cultural events, publications and spiritual discourses at Bharatiya Vidya Bhavan (BVB), Bangalore. Without our knowledge our conversation veered towards Dharmasastras and its modern interpreter Bharat Ratna Dr. P.V. Kane.

This multi-volume publication in English, known as History of Dharmasastra running to about 6,500 pages was the magnum opus of this great sage-like scholar. It was not an archaic publication dealing with socio-religious-legal history of ancient India but a vibrant modern book of knowledge without which an advocate cannot argue in a family litigation dealing with property, adoption, division, divorce etc. Perhaps such a compendium may not exist in any other language of the world.

Thus when we were admiring this publication, Sudha Murty lamented that this great treasure of knowledge is not available in Kannada, and the Kannada speaking public are denied of this great classic. She went a step further and offered to sponsor it if BVB could take it up with Mysore University.

Immediately, I told her that during the times of Prof. Dejagow and Ha. Ma. Nayak the translation work had been completed with the first volume being published and the entire manuscript was available in Kuvempu Institute of Kannada Studies, Manasagangothri.

They authorised me to negotiate with the then Vice-Chancellor. Our great Kannada writer Dr. S.L. Bhyrappa also wrote to the VC. I met the authorities and got an assurance of its publication immediately. The manuscript had been safely preserved by Dr. Pradhan Gurudatt (then the Chairman of Kuvempu Bhasha Bharathi, Bangalore). Everything seemed rosy but nothing happened.

Any serious student of modern legal history cannot afford to ignore History of Dharmasastra authored by Mahamahopadhyaya Dr. Pandurang Vaman Kane. He was born in a village called Parasuram near Chiplun in Ratnagiri district of Maharashtra on May 7, 1880 in a Chitpavan Brahmin family of a good Sanskrit background.

After studying Sanskrit and Law he became a lecturer and subsequently enrolled himself as an advocate in Bombay High Court. In the midst of these professions, he found time and energy to write books and research papers running to about 15,000 pages in print.

He began his academic career by editing many Sanskrit classics. However, he planned the History of Dharmasastra in 1930 and completed it in 1962 in five volumes — 6,500 pages (1930, 1942, 1946, 1953, 1958). The list of books, manuscripts, inscriptions, records he had consulted in writing this book runs to 257 pages! He showed to the world that Dharmasastra is not a static text but an ever-growing revised versions of the code of conduct in social, economic, religious and legal fields.

High Court Judges, while disposing of cases of Hindu law, would ask the advocates, what does Dr. Kane say in this aspect? This publication brought great laurels to Kane. He was made Mahamahopadhyaya, conferred D. Litt, Honorary Membership of School of Oriental Studies, London, Doctorates from Poona (Pune), Allahabad and many other Universities. He was awarded the Sahitya Akademi award in 1956 for History of Dharmaśāstra, Vol. IV for his research under Sanskrit translation category.

He became National Professor, Member of Rajya Sabha, Vice-Chancellor of Bombay University, received Rashtrapathi’s honour etc. To crown all these achievements, he was conferred Bharat Ratna by another Bharat Ratna and President of India Dr. S. Radhakrishnan. A rare sight to witness two Bharat Ratnas together.

Though he studied and analysed various Dharmasastra texts, he had no hesitation in pointing out their commissions and omissions with reference to modern thoughts and practices. He was a great humanist and took healthy interest with regard to poor and downtrodden. He helped many families in distress irrespective of their caste and community.

A widow (without the head shaven) went to Pandarapur and wanted to prostrate before Vithala by touching her head as was done by others. But the temple authorities did not permit her to do so till she shaved her head. Dr. Kane took up her case and argued without charging any fee and won her case.

Some poor people were fighting against the Indian Railways without any success. Dr. Kane took up their case without any fee and won their case which helped hundreds of people. Thus he became a man of the masses doing social service.

Late K.R. Mohan, a resident of our city, gave me details of Kane’s visit to Mysuru in 1951 and meeting Kaulagi Seshachar, V. Sitaramaiah, T.N. Srikantayya and others. I had the good fortune of meeting him once at Bombay but did not have the courage to argue with him regarding the early geography of Maharashtra. I just got his blessings. Dr. Kane will be remembered as long as Indian legal system lasts.

An honorary member of the Bharatiya Vidya Bhavan, Dr. Pandurang Vaman Kane left for his heavenly abode on May 8, 1972, aged 92.

2 COMMENTS ON THIS POST To “Bharat Ratna P. V. Kane: An Embodiment of Dharmasastra”