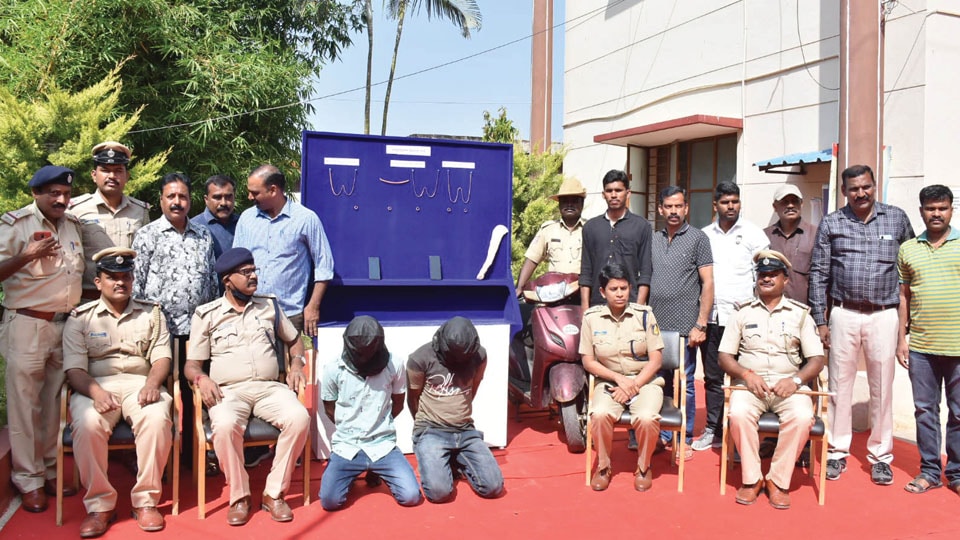 Home-alone women are their easy targets

Mysore/Mysuru: Two members of the notorious dacoit gang who were arrested by the Vidyaranyapuram Police on Feb. 1 in Chamundipuram were part of a gang that not only threatened morning walkers but also robbed home alone women.

Two members of the gang — 30-year-old Shiva alias ‘Tagaru Shiva’ a resident of K. Salundi in Mysuru taluk and 33-year-old Harish Yadav alias ‘Haavali’, a resident of Sharadadevinagar — have now been sent to jail while their gang leader Sharath is already in jail and he was arrested two months back at Saraswathipuram when he was found moving suspiciously in an Omni around midnight.

Speaking to reporters at Vidyaranyapuram Police Station yesterday, Deputy Commissioner of Police Geetha Prasanna said that gold jewellery worth Rs. 4 lakh have been seized from them. Three other members of the gang – Sunil Kumar, Shashank and Karthik – are absconding and a dragnet has been spread to catch them.

The gang members — six in number — used to target home alone women and used to keep a watch on their movements before committing the crime. Once the target house is fixed, two members of the gang would knock the door while three other gang members would keep an eye on the area.

On Aug. 20, 2020, the gang robbed a home alone woman in Mahadevapura using the same modus operandi. The woman who was targeted was 45-year-old Nagarathnamma, wife of late Nagesh, who was staying alone in her house at B-Block Mahadevapura.

In her complaint on Sept. 12, 2020, Nagarathnamma said that she heard a knock on the door on that day and when she opened the door, two men were standing before her and requested for water. “As I obliged and turned towards kitchen, the two men swiftly entered the house and locked the door from inside,” she stated in her complaint.

The duo later flashed a dagger and forced Nagarathnamma to open the shelf inside the bed room and took away a gold chain weighing 11 grams, a gold bracelet weighing 10 grams and 5 rings weighing one gram each along with cash of Rs. 17,000. The total weight of the gold ornaments that were stolen was over 25 grams and in the present market rate, it is priced at over Rs. 1,12,875.

Before leaving Nagarathnamma’s house, the dacoits threatened to kill her if she reported the incident to Police. “As they were leaving my house, I looked from the window and saw three more persons in the age group of 25-30 years watching the movements of other people on the road,” Nagarathnamma told Police.

With the arrest of two persons, the Police have solved two more cases — the gang had robbed the gold chain of C. Chandru, a retired employee of BSNL on 5.9.2020 when he was walking near Akkamahadevi Circle on the Ring Road and had robbed Ananthaprabha, a resident of Vishveshwaranagar on 27.8.2020. A gold chain weighing 25 grams, a gold bracelet and a gold ring was robbed from her.

The total value of the seizure is Rs. 4 lakh and the accused were arrested at Chamundipuram when they were standing in front of a pawn broker shop trying to sell the ornaments. On seeing the Police they tried to hide themselves. The accused had changed 25 to 30 SIM cards to evade arrests but the Police tracked their phones through IMEI number, Police said.