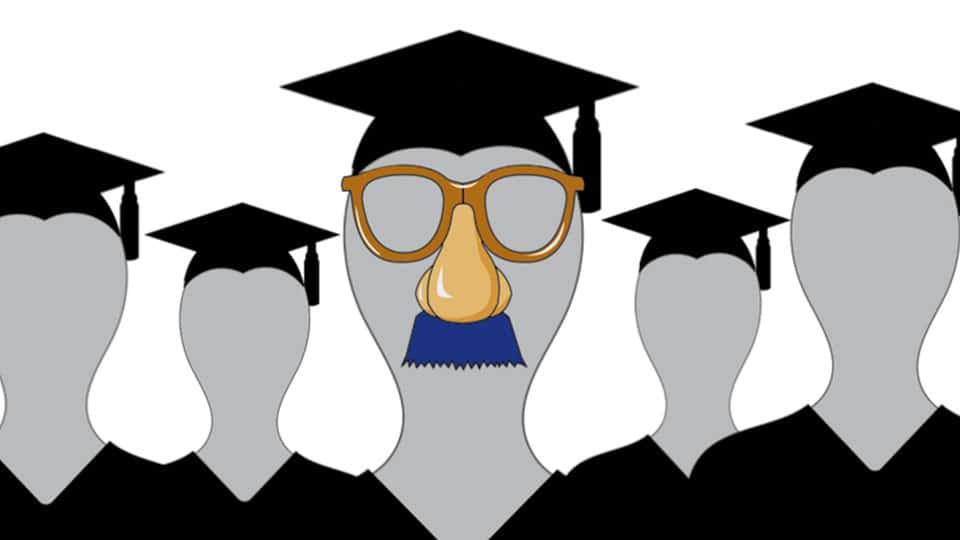 Honorary Doctorate has no Honour anymore

A few days ago, a University located in Cyber Space, yes it literally is a Virtual University, gave not 1 not 10 but 30 Honorary Doctorates! Wow! We didn’t know there were so many people who have done such impactful work for the society.

The event was presided by senior academicians and I wondered if they felt awkward handing doctorates to people who had not put in the kind of hard work they had to get the coveted “Dr.” which they proudly prefix before their names though it is not permitted since it is only an Honorary Doctorate.

It’s tragic that honorary doctorates are being doled out so easily. It makes one cringe when educated people are neither embarrassed nor ashamed to pay to get a doctorate and call themselves “Dr.” for which others have studied, researched and spent sleepless nights for years to attain.

These days, anyone who wants to build a profile and who has a fetish to become a  “Dr.” simply pays and gets one. I call such people ‘Donald Docs’ because they are quacks.

READ ALSO  Can Indira 2.0 save Congress?

It is obvious that Universities use honorary doctorates to boost their prestige by associating with accomplished individuals or give doctorates to popular movie stars as it garners them free publicity.

In fact, most of the doctorates given to Indian movie stars are from foreign Universities that want to attract Indian students. For other small Universities, selling a doctorate is a money-spinner.

Universities, instead of projecting the achievements of their students, the scholastic papers published by their faculty and their excellent infrastructure are using honorary degree to garner free publicity and cover up their shortcomings.

Now many Indians are getting doctorates from abroad so they can get a job in India. And sadly, Indian Universities don’t check the certificates. In Mysuru itself there are a few Principals who have got Ph.Ds from Universities in England. These Universities are not even recognised by the British Government but surprisingly the University of Mysore has accepted these Ph.Ds and allowed its holders to become Principals of colleges in Mysuru !

Sadly, even real Ph.Ds are a disappointment. To qualify for a Ph.D one must write a test and the qualifying marks is just 50%! A doctorate indicates that the person holding the degree knows everything about a particular subject. So he or she is the final word on that subject. But how can a person be the “final word” on a subject when he has scored only 50%? At best he can be the “semi-final word” and not the “final word.”

Even the topics of research are ridiculous. There are Ph.Ds on Amitabh Bachchan; yes these people know everything about Big B without ever having interviewed him, their subject! There is even a thesis on former Karnataka Chief Minister B.S. Yeddyurappa. There is also one on the illumination of Mysore Palace! Let’s hope these people don’t enter academia.

It is disappointing that in the 21st Century where “excellence” and “meritocracy” are the key to development, our Universities, places that are supposed to produce people of excellence and merit, are doling out degrees to people who have neither excelled nor meritorious in their own field.

May be it’s time for governments across the globe to stop their Universities from this farce of a practice as it is an insult to all genuine doctorate holders. That apart, these days if you tell people you have a doctorate, they ask, “You got it at what rate?”

That is why today an Honorary Doctorate has no reason to hold a place of honour in our society and for the most part it doesn’t.