Home » Columns » How did Bjp manage to lose Karnataka? 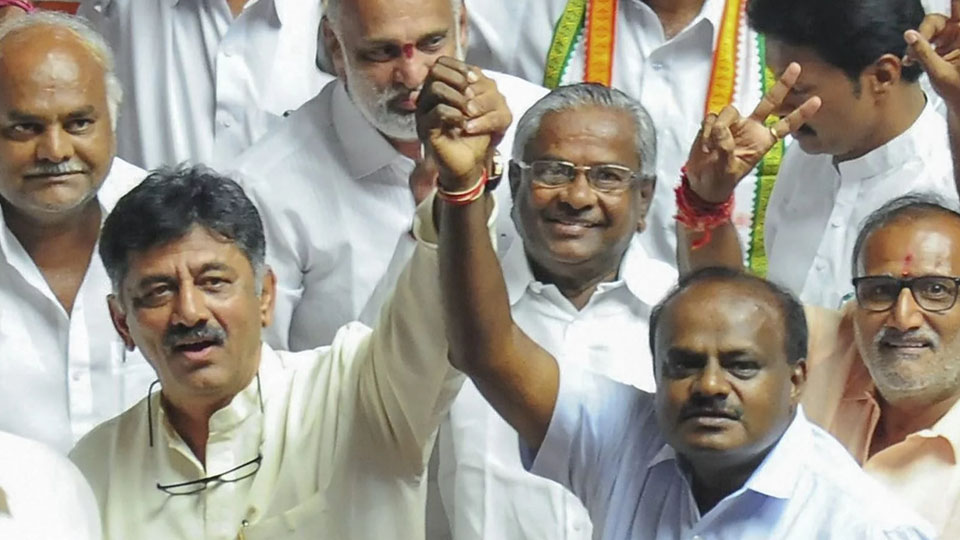 How did Bjp manage to lose Karnataka?

A  very old saying, “The enemy of my enemy is my friend.” But this is not true in politics. BJP learnt this the hard way.  With 104 seats in a 222 seat Assembly, they had to concede defeat and sit in the opposition. For another five years. It was pathetic to see  Yeddyurappa, already 75-year plus, almost weeping at the lost opportunity. Let us now analyse the real reasons for this defeat.

Going soft on JD(S): The think-tanks of BJP went overboard on going soft on the JD(S). They put up weak candidates opposite all the major leaders and important seats like Chamundeshwari deliberately hoping that the JD(S) will eventually win and would be grateful to the BJP. Even the tenor of the speeches of the Prime Minister was soft on JD(S) leaders. But they forgot about another wily fox, the tall Vokkaliga leader from Congress D.K. Shivakumar (DKS), an ambitious leader who has his sight on the cm-gaddi. He anticipated in advance that Congress was not going to make it unlike his CM colleague Siddharamaiah who went about the campaign saying that his party, Congress, would come back to power. Siddharamaiah did not anticipate the undercurrent of anti-incumbency in the State. So DKS opened up a back-door line with H.D. Kumaraswamy and ensured that Kumaraswamy would win in both the seats he had contested.

It is an open secret that once the election results were out, Kumaraswamy would resign one of his seats in favour of his wife Anitha. A lovely family affair, orchestrated by dks. The BJP, blissfully unaware of all this, went about trying to please JD(S) thinking that they could depend on JD(S) for support in case required.

READ ALSO  What IF ?

Modi even went to the extent of saying in a public speech how he received Deve Gowda whenever he visited him in Delhi by opening Gowda’s car door and going up to his car while sending Gowda after the visit.

The Congress had learnt its lessons well after having been outsmarted in Goa and Manipur. By 12 noon, when the results were being read out, the Congress leaders realised that the results were in favour of BJP. Without waiting for the final outcome, they threw their weight behind the JD(S), giving an unconditional support. So the king-maker became the king.

As far as Congress was concerned, BJP was enemy No. 1 and taking the national view it was important to keep them out of power. And they succeeded.  Having lost the race in the current  State elections, they saw a brilliant opportunity to cobble up a good alliance to keep BJP out of power in the 2019 elections.

Chandrababu Naidu and Telugu votes: Why did Modi renege on his promise in the Parliament to give “special status” to Andhra Pradesh, is still a mystery. I have met a few Andhra people and they are boiling mad. The way Naidu has been humiliated is also not going well with the people of Andhra Pradesh. This anger has affected all the seats bordering Andhra Pradesh for BJP.

Keeping Vijayendra out of Varuna: It is rumoured that a tall Lingayat religious leader intervened in this and requested Yeddy to ask his son to step down from Varuna as a candidate. A bad decision. Vijayendra was winning and he would have made a mark in some districts surrounding Varuna too, for BJP.

BJP unsure about Yeddy: The top brass of the BJP were unsure about using Yeddy. Though they had declared Yeddy as cm candidate, they were not sure how he could carry on the campaign considering his age. He was not called for all the PM’s election meetings. Yeddy’s internal bickering with Ananth Kumar is well-known and this resulted in some weak candidates getting tickets.

One cannot pin-point a single reason for the defeat of BJP but a combination of all the above resulted in the BJP not able to cross the half-way mark. What is the lesson BJP has to learn from this important election?

Firstly, just Modi-Shah combination alone is not enough to win elections for BJP anymore. They require some local and regional satraps too.

Secondly, it is time they start re-negotiating with their allies to ensure that they are still with nda. In Uttar Pradesh, to expect the BJP to win 70 seats is unrealistic considering that Akhilesh, Mayawati and now Congress are going to come together. A Congress-JD(S) combination in Karnataka is going to give a tough fight to the BJP. A Congress-NCP-Mayawati combination in Maharashtra too would give a tough fight to BJP sans the Shiv Sena, another ally who is ready to desert the ship. As far as Congress is concerned, they do not mind playing second fiddle to any party, to defeat the main enemy, the BJP. Imagine a Karnataka-like situation, BJP gets about 180 to 200 seats but with no allies, they will have to sit in the opposition!

There is an old saying when two cats fight, the mouse is happy. Kumaraswamy is a happy man. With just 37 seats, he is sitting pretty in cm’s gaddi and may be hoping that in the next general elections if he manages to get about 15 MP seats, he might become pm too like his father!