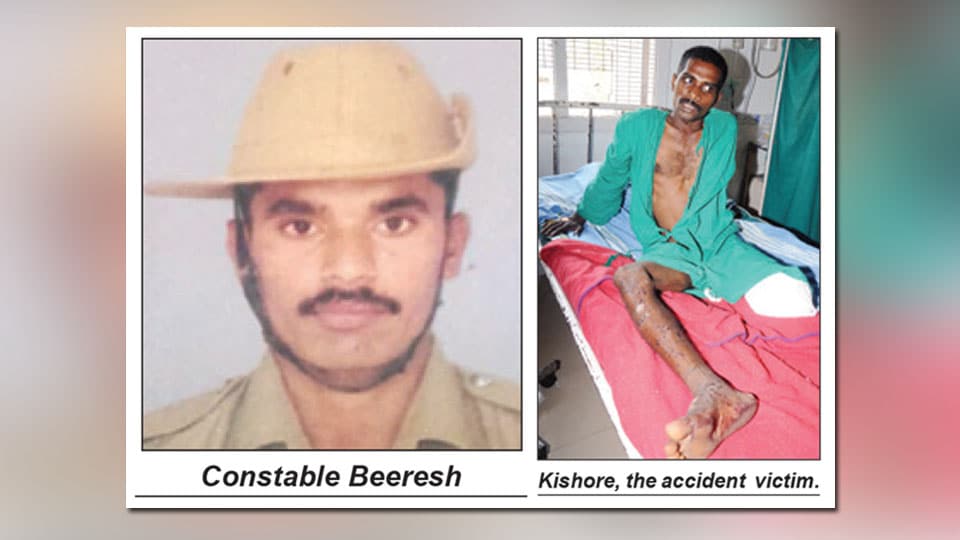 Mysuru / Maddur – A Railway Policeman went beyond his call of duty to save the life of a man whose leg was cut by a running train. Seeing the victim lying in a pool of blood and with no help forthcoming from the people gathered around, who were instead busy clicking pictures and shooting videos of the severed leg, the Policeman lifted the accident victim and rushed him to a hospital.

The incident occurred in Maddur on Thursday evening where the Policeman, Beeresh, turned an angel to save the life of Kishore who met with the accident. According to 35-year-old Kishore, who is now recuperating at the K.R. Hospital in city, on that evening he was sitting near the door of the Mysuru-Bengaluru train when he slipped and fell off the moving coach.

Kishore, hailing from Sampathnagar in Guntur, Andhra Pradesh, boarded the train in Mysuru where he had come to meet a person. The train ran over his left leg completely severing it in half, leaving it dangling by the flesh even as he lay on the tracks. No one came forward to help Kishore despite his pain-filled screams for help. People gathered at the spot were busy clicking photos and shooting videos of the severed legs.

One person among the group poured water on Kishore’s blood-filled face for him to drink. But Kishore kept on pleading to shift him to a hospital and no one volunteered. Luckily for Kishore, Railway Police Constable Beeresh was nearby who rushed to his help. He unpacked Kishore’s bag and tied the bleeding leg with some of his clothes. 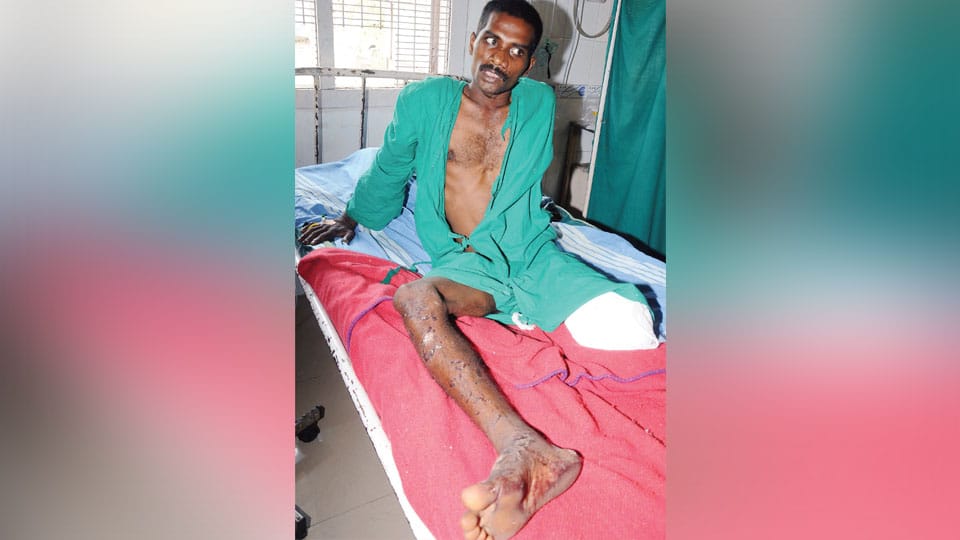 Though he had informed the ‘108 Ambulance Service’, Beeresh realised that waiting for the ambulance would kill Kishore as he was heavily bleeding. He then lifted Kishore and carried him to cross the tracks and reach the auto stand. He waved at an auto outside the station but the auto driver sped away seeing Beeresh carrying the accident victim. Beeresh then stopped a goods auto and took Kishore to Mandya Institute of Medical Sciences Hospital. After first aid, Beeresh was asked by the hospital to shift Kishore to K.R. Hospital in Mysuru.

Beeresh then managed to stop a private vehicle and convinced the driver to take Kishore to Mysuru. Beeresh paid the transportation charges and it was late in the night when they reached the K.R. Hospital.

Beeresh’s next task was to get two units of blood as a lot of blood had flown out of Kishore’s body. He managed to get the blood after which the K.R. Hospital doctors cleaned the wound and plastered his leg. Beeresh waited till the doctors completed the procedures and after Kishore was shifted to the ward, he came to Maddur and it was 2 am when he reached home.

“I have done my job and if I had waited for the 108 Ambulance in Maddur, there was a danger to Kishore’s life,” said Beeresh and expressed happiness that Kishore was recovering well.

Kishore is now recuperating at the hospital and is a bit disoriented. Not much is known about Kishore and he gets angry when he is questioned. Doctors said that his medical condition is forcing Kishore to get angry on visitors. His condition is, however, stable.