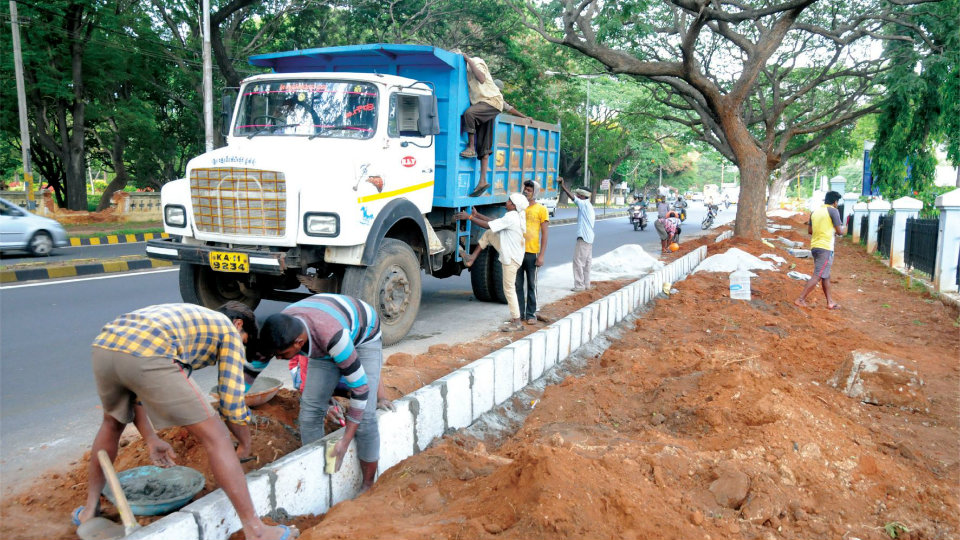 Mysuru: The Mysore Grahakara Parishat (MGP) has accused the Public Works Department (PWD) of violating an undertaking given to a Court in Mysuru and going ahead with the widening and straightening of the road between Jaladarshini Guest House and Valmiki Road Junction on the Hunsur Road.

They have alleged that instead of following the revised and mutually agreed proposal, the PWD has gone ahead with the original project proposal.

In a press release, MGP Conveners S. Sobana and Major General (Retd.) S.G. Vombatkere have stated that the original project proposal was in violation of the MUDA Mysore Master Plan 2013 and accordingly, the MGP had filed a case in the Court.

The court issued notice to National Highway Authority of India (NHAI) and others and accordingly, the Assistant Executive Engineer, PWD, prepared a revised project proposal with limited cutting of trees and without damage to the ‘heritage compound wall’ and to the trees growing inside the Jaladarshini compound and adjoining areas.

Vombatkere said that this was accepted and AEE of PWD commenced the work after providing an undertaking to the Court that work would proceed only according to the revised, mutually-agreed proposal.

Vombatkere observed that trees have been felled on the Kukkarahalli Tank side of Hunsur Road and part of the ‘heritage wall’ adjacent to Jaladarshini compound has been removed exposing several trees on that side of the road.

Reacting to the MGP press release, Mysuru-Kodagu MP Pratap Simha told Star of Mysore that they were trying their best not to cut more trees for the project. “Yes, we have provided an undertaking before the Court and so far, only three trees have been cut. Three more trees will have to be cut for the project to benefit the public. The cutting is inevitable and I assure the people that for the loss of six trees, 60 saplings will be planted so that the heritage look of the stretch is retained,” he said.

The MP added that carrying out the project without cutting trees is not practical. “The road is widened and straightened for the larger public good and in the process, a couple of trees are cut. We will compensate the loss by planting trees (1:10 ratio) on the stretch,” Pratap Simha said.

ONE COMMENT ON THIS POST To “Hunsur Road straightening and widening works: MGP accuses PWD of violating undertaking given to Court”