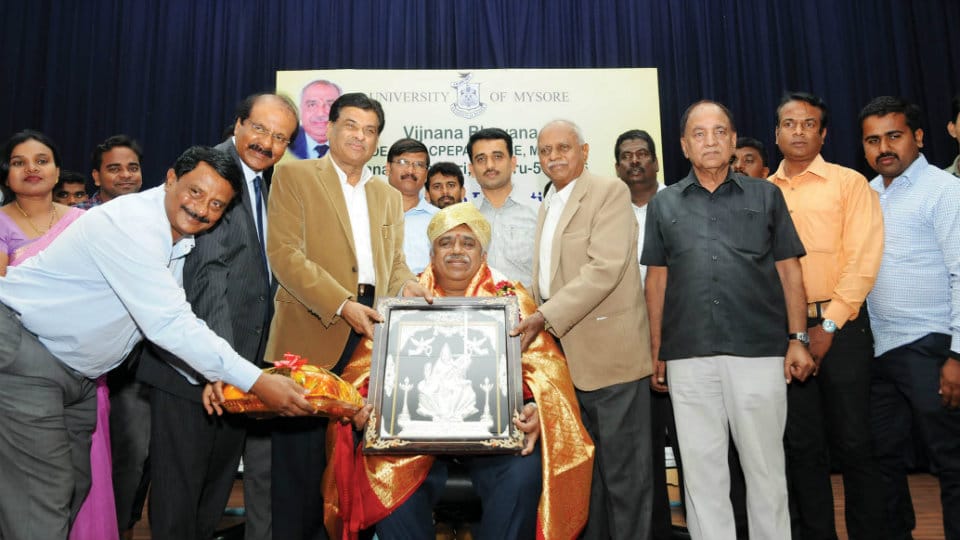 ‘I will co-operate to take Mysore Varsity to National level’

Mysuru:  “I will fully cooperate with the new Vice-Chancellor to take the University of Mysore (UoM) to the national level,” said former UoM Vice-Chancellor Prof. K.S. Rangappa.

He was speaking at the felicitation function organised in honour of the new Vice-Chancellor of UoM Prof. G. Hemantha Kumar by Institution of Excellence (IOE) at Vijnana Bhavana in Manasagangothri yesterday.

“The new VC has already met Chief Minister H.D. Kumaraswamy with regard to the growth of the University. I will also meet the CM and the Higher Education Minister G.T. Devegowda and speak to them about the steps to be taken to improve the University,” he said.

Prof. Rangappa also has that he had known Prof. Hemantha Kumar since the last 25 years and any work entrusted to him, he would do it diligently. He will gain the confidence of everyone and take the University to the national level, said Prof. Rangappa.

He advised the new VC to see that he works in the interest of the students and the staff of the University and take bold decisions within the confines of the law and without bowing to any pressure. He also asked him to come out with new projects.

Former VC of Kuvempu University Prof. P. Venkataramaiah said that it is due to the achievements of Prof. Hemantha Kumar that he has got this prestigious position. It is a matter of great pride that an alumnus of the University is decorating the chair of the VC.

“The post of the VC of UoM is not an easy job. There will be huge responsibilities on his shoulders, however, we are all confident that he will be able to handle them,” said Prof. Venkataramaiah.

“One of the main challenges he has, is to preserve the quality of education and appointment of lecturers which has not been done since the past ten years. However, he has already made plans to implement them. But he needs the cooperation of teachers,  students and administrative staff,” said Prof. Venkataramaiah.

Later, replying to the felicitation, Prof. Hemantha Kumar said that if he had become the VC today, it was only due to the staff in the University who had worked with him in the past. Even in the future he will seek their cooperation, he added.

It is very difficult to manage the post of the Vice-Chancellor of the century-old University of Mysore, as one has to face many challenges. A few of the Professors in the University have the traits to tarnish the image of good people. There are people here who are jealous of the growth of others. They are so selfish that all their interest is in self-promotion and what they can gain for themselves. The new VC should take precautions not to fall into the trap of such negative people and see that he works only in the interest of the University.