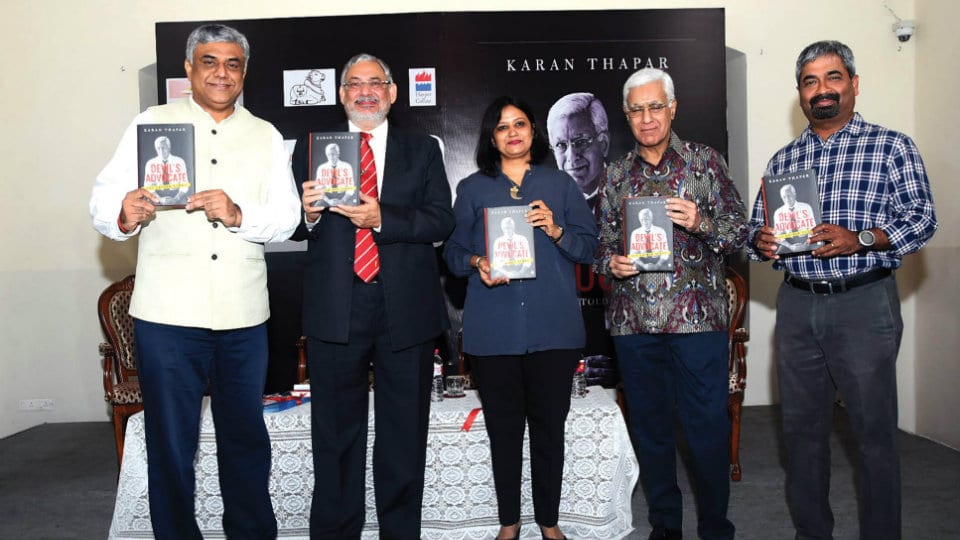 Mysuru:  “It is not just the BJP that has adopted this stupid, shallow, reprehensible, vindictive, vengeful attitude to the media but what I may say you might not like, but so have Congress governments. It was what Indira Gandhi did during the Emergency that surpassed everyone and what she did was several degrees worse,” said senior journalist, television presenter and author Karan Thapar to a huge round of applause.

He was reacting to a question by Rajya Sabha MP Prof. M.V. Rajeev Gowda on how the then Prime Minister Atal Bihari Vajpayee had cracked down on Tarun Tejpal’s Tehelka, thus trying to control the media.

The serious issue of the role of media today, was being discussed during the launch of the book “Devil’s Advocate – The Untold Story” written by Karan Thapar at the picturesque, heritage structure Wind Chimes yesterday, where Prof. Rajeev Gowda was in conversation with Karan Thapar.

The launch was organised by Mysuru Literary Forum Charitable Trust, Mysuru Book Clubs-2015 and HarperCollins India and there was intense discussion with a lot of humour in the almost one-and-a-half-hour interaction where the packed, overflowing hall also eagerly participated in the question-answer session that followed.

The conversation began on a light note with Karan telling Gowda, “I am entirely yours,” and the repartee equally quick “It is my devilish pleasure.” The questions by Gowda included how privileged Thapar was to be born into an elite family and the advantages he had because of that but when the same happened to politicians they were criticised for dynastic politics.

Thapar deftly answered that question before moving on to the current trend in the media where he considered most of television anchors as lazy and not doing their home work properly and hence indulged in allowing the shouting matches that go on during debates.

He then dwelt at length how terrible the Emergency imposed by Indira Gandhi was and then even told about what Rajiv Gandhi attempted to do with his Defamation Bill against the media when the Bofors scandal broke out and journalists across the country had come to streets to protest to see that it was not passed.

“So the tradition of politicians in power losing sympathy for the press and particularly when they are critical of them has continued,” he said.

However, sadly the trend has continued with the current government headed by Narendra Modi too. “The politicians today have lost the ability to answer questions posed by the journalists with restraint and dignity. Many in the BJP right from the Prime Minister Modi down including the likes of Arun Jaitley, Nirmala Sitharaman, Prakash Javadekar who were all accessible till 2016, have boycotted me,” he said and added “This trend does not augur well either for the media or for the country.”

Asked about his experience with the Prime Ministers, Thapar said that one of the most delightful persons was the late Vajpayee who was a gregarious fun-loving human being. Referring to his companion Rajkumari Kaul, he (Vajpayee) used to say “High Command se baat karte ho aur interview fix karte ho.” This was the human being who knew how to handle questions that had barb in them, because he had charm, wit and the most engaging smile to answer them with honesty and integrity. A section of audience at the book launch programme.

Referring to the most interesting interview, he picked the one with music legend A.R. Rehman when he had just been conferred the Padma Shri. “I asked how he felt about the award thinking all the time, that he would effusive about it. Instead, all I got was um for the first question, ummm… for the second one and um… for the third one!”

To the question by Gowda on the way the 24X7 television channels operate now-a-days which are actually in the grips of industrialists and the subtle censorship that has followed, Thapar said that one example of good television is BBC. However, most of the Indian channels are focusing on views as it is very easy to get a few so called experts and ask them for their opinion. However, he also pointed out that gathering news is an expensive affair and hence this easy route is also chosen.

Continuing, he said that the anchors have lost the ability to ask questions and indirectly referring to a few channel anchors without naming them, he said that instead they want the panellists to answer the way they wanted to hear them and not what the issue really was all about.

Earlier, Industrialist Raian F. Irani launched the book and spoke about Karan Thapar’s ignorance about cricket. He also compared the author to a bowler as he has to have all the craft and guile to bowl the batsman out and that is exactly what Thapar was doing all the while to his acclaimed and celebrity guests by posing tough questions.

Mysore Book Clubs-2015’s newsletter ‘Book Leaf’ that is dedicated to the memory of late writer D. Lalitha Rao, who was the editor of the Newsletter, was released by her husband Architect Prof. D.S. Ramakrishna Rao.

Before the start of the programme, one minute silence was observed for the flood-affected vitims of Kodagu and Kerala.

The second edition of the Mysore Literature Festival will be held in Mysuru on Nov.17 and 18.

The Fest will bring in authors of different genres from various parts of country including ones from Kannada. Besides there will be sessions on children literature, sports, wildlife and crime, she said.