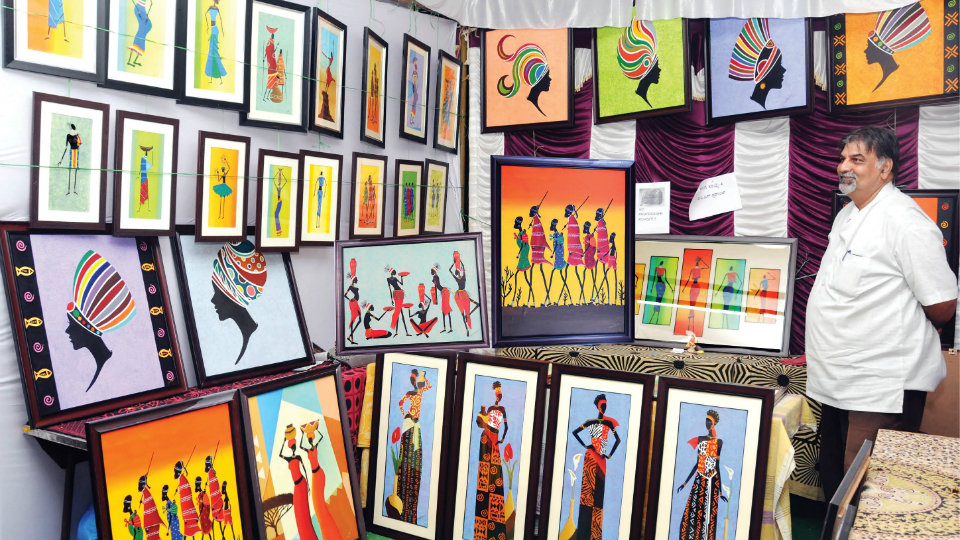 The world is full of amazing artists and this is true not only of individual artists but also people belonging to a community, race or region. India itself is home to some of the finest traditional painters, craftsmen and performers. The other continent that attracts attention when it comes to tradition, art and culture is Africa.

Exploring the art forms of Masai Mara or Zulu Art is Mysuru’s own artist, M.S. Prashanth, a resident of Saraswathipuram, 7th Main, 3rd Cross, who has been painting this art form since the past 20 years. He has concentrated mainly on the daily lifestyle of African tribes and won the admiration of art connoisseurs.

The Maasai (Masai) people are more commonly associated with Kenya but they have been a presence around the Ngorongoro Crater of Tanzania for over 150 years and are the area’s main residents. They are predominantly a warrior tribe whose lives revolve around herding cattle.

When compared to other art forms, those involved in Zulu are very less. Using black, light red, orange and a few other colours, Prashanth creates eye-catching paintings and these are available at affordable rates, unlike many paintings that are beyond the reach of common man.

Prashanth has exhibited and sold his works at Bahuroopi National Theatre Festival organised by Rangayana for the past 13 years. He has also held exhibitions in Bengaluru’s Chitra Santhe and other exhibitions in Chennai and New Delhi. Another organisation where he repeatedly participates at the State-level is the one organised by Gandhi Shilp Bazaar.

He has sold thousands of paintings so far to art-lovers from India and abroad. Prashanth’s artfully done Masai Mara paintings have adorned the walls of many offices, hotels and homes.

It is very difficult to value paintings as many of them are priceless. There was a time of course when some of the finest painters in the world led a life of penury and even died in abject poverty. But years or centuries later, their paintings acquire value and are sold or auctioned for astronomical sums. One such painter that comes to mind is Vincent Van Gogh, who was one of the most influential and famous figures in Western art.

Fortunately, things have changed and artists and painters do get their due in their itself like for instance Raja Ravi Varma, who was a painter in the Mysore Palace and the barefoot painter M.F. Husain. Hence, many would pay fancy figures to possess a Husain or Vincent Van Gogh paintings.

But Prashanth has made up his mind that his paintings on Zulu Art would be affordable for anyone who is interested in art.  A 1 ft X 2 ft or 4 ft X 2 ft art work starts from Rs. 600 per piece and goes up to Rs. 6,000.

As his art works are affordable, the number of people who are interested in this unique art which Prashanth has a lot of takers as they are framed in black with the attired women and men sporting headgears, traditional weapons that everyone’s attention and carries its own stamp.

I have been doing this Masai Mara (Zulu) painting since the last 20 years. Earlier, I was doing different type of paintings and slowly chose this form as I was attracted to the dresses and lifestyle of the Masai Mara tribe,” Prashanth says.

“I learnt this art from senior artist Syed Mustafa Ali. Later, to further improve myself, I got in touch with international artist Canine Edward Waldo, who introduced me to the African theme. Then I learnt the background art work from leading artist M.G. Doddamani,” he adds.

On his art, he says, “At the last Chitra Santhe organised in Bengaluru by Karnataka Chitrakala Parishath there were more than 1,250 artists but there was not a single painting in Masai Mara style. At an exhibition in Chennai, Sri Lankan Sports Minister’s wife bought 30 of my paintings. I did not know her at all but later Sri Lankan Embassy people came and collected a few more of my paintings. This is an unforgettable moment in my life,” he says proudly.

“Masai Mara art is not difficult and anyone can learn it. I use the brush which I brought from Germany and hence, mixing of paints become easy and the paintings come out beautifully too,” he quips.